First of all, the winning TD? That was the exact – and I mean the EXACT – same play we lost the 2002 AC! If you remember, the play was a bubble-screen to the slot man, Jerome Riley. Kegel took 3 steps and waited a count too long to throw the ball. When he finally did, Kai Ellis leaped and knocked the ball down, whistles blew incomplete, and then we know what happened after that. I was too drunk to remember for sure, and I couldn’t see how the play was developing from my angle, but after the game many said that play would have gone for a score, if not first-and-goal. Why? Based on UW having their strong safety moving into the box and shaded to the left to cover for a linebacker blitz off the weak side, and the free safety was sliding over to cover the middle of the field. So you had man on the outside WR and the slot. Basically all it would have taken was a complete pass to the slot sprinting to the outside, the WR making his block, and that game could have ended right then in a very different way. Ah well.

Here’s a link to video of the bubble screen:

And a link to an animated GIF of the play (can’t get it to post for some reason): 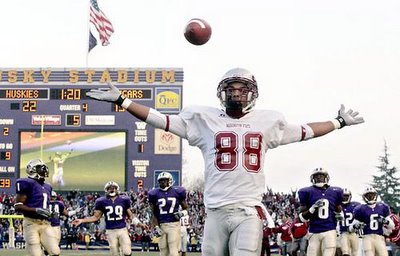 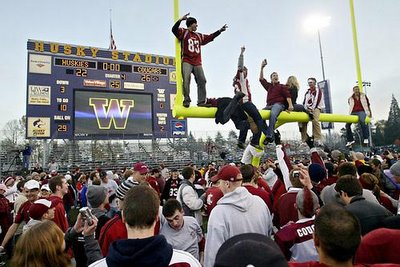 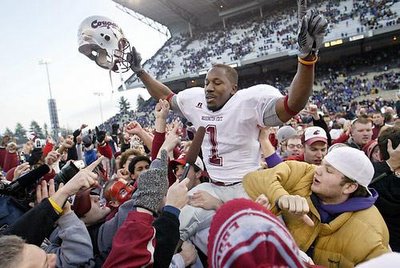 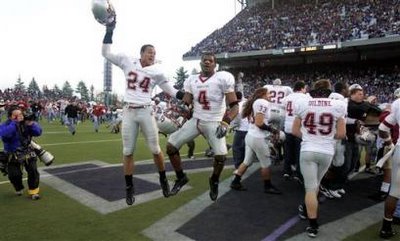 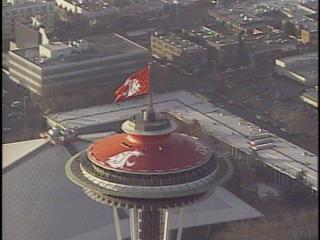 Let them whine and cry about us dancing on the W. I remember very well UW dancing on our logo in 2002, among a lot of very ugly things, and they did the same thing the week before at Oregon. Karma has a way of evening things out.

I heard the Oregon-OSU broadcasters say WSU is the greatest 1-7 team in Pac-10 history, and easily should be going bowling. They talked about the UCLA, Cal and ASU games as ones they should have won, and that WSU is a 7-4 team all the way. Like that matters…..but still, nice to hear it on another broadcast, where they don’t have to say anything. We aren’t the only ones who know how close this team really was to breaking out.

Meanwhile, congrats to UW on a fine season, doubling their win total from 2004. That 2-9 season will set up a lot of momentum towards recruiting and stadium renovation fund-raising.

Finally, LOVE the grey pants and grey helmets on the road! Our last 3 AC wins have been with grey pants, so let’s keep it going. Lose the fire-engine pajama bottoms from the road, keep the crimson helmets at home as well, and let’s go more old-school. Not that it matters, but man, looking at those garbage, trendy uni’s on teams like Oregon State, Oregon and Miami tonight??? YUCK.

Oh yeah, and little Alex Brink? He now has as many AC wins as Gesser, Leaf and Bledsoe – combined. He also broke the sophomore WSU QB record for most yards in a season. Worst 2800-yd, 24-TD sophomore QB ever!??!

The saddest part of this year? We had over 500 yards of total offense in this game. Here’s a did you know – if we would have gained 554 yards today? This offense would have actually broken the team record of total offense set by the 1997 Leaf team! Can you believe that? That great, high-flying offense led by a Heisman candidate QB and all those receivers, and the ’05 version damn near beat them in total offense? I about fell out of my chair when I read that today.

Michael brought up a very good point last week. Since the 2nd half of the ASU game, something has changed with the defense. It’s like they finally just woke up, got pissed off, and started attacking! Sure, the Ducks scored 34 on them, but they didn’t track-meet us all that much. It wasn’t nearly as bad as the 2004 loss at least. And today, when they absolutely had to get stops, they were able to. Not that UW is an offensive juggernaut (9 TD passes for Stanbeck on the year?? YIKES!), but James Sims did run for 200 yards last week vs. AZ.

I think very good things are yet to come with this team. ON paper, right now, we’ve got 15 starters back from this team coming back next year. On D, we only lose Braidwood from the entire d-line rotation, so we’ll be strong up front (which is VITAL). Other than Derting, the LB’s will be back. Both corners, Dada and Teems will be gone, but we’ll probably see Don Turner take over at one spot, and Tyrone Brackenridge at the other (he’ll be a senior next year and was really missed from this team). The D will be just fine. Not a dominating D, but they’ll certainly be in the middle of the pack.

ON O, obviously Brink will be back. Like it or not, you have to think he’ll be a lot better in terms of just being more consistent next year. He was just so damn streaky this year, and while I don’t have all the games on tape, I can recall many moments where not only was he in complete control, but he threw some balls with some heat where you kind of what “hmmm, he threw that one in there with authority”. But, I can also recall many moments where he’d just flutter up an ugly duck, or throw a lousy interception, or miss someone WIDE open, or take a sack when he absolutely shouldn’t. That’s part of learning that position, and starting with today, I believe he took a step forward. Like Michael said, he FINALLY was able to drive this team to a win. He finally made plays when we needed it. He was able to get away from his security blanket in Hill and beat them with guys like Boyd and Harvey.

Other skill guys that will be back are Hill, at least he should be. Bumpus, who we missed today. Jordan, bad knee and all, could still be a solid possession guy. Brandon Gibson who was banged up but coaches are extremely high on and he’ll have a huge role next year. Boyd, who dropped his share this year, yet was huge on that last drive today. And, while we lose the best running back in school history (and outside Leaf’s 1997 year, maybe the best single season of any WSU player, ever), there is a lot to like about Demaundry. There will be others in the mix, like McCall, plus a JC RB will be found (JC all-American JT Diederichs, a WSU signee out of high school and running hard at Dixie in Utah, still favors the Cougs), as well as the RB putting up sick #’s in Phoenix right now, Marcus Richmond, who sounds every bit the real deal.

Finally, on today – You can say “yeah, but it was just UW” but you know what? UW was jacked up for us. UW wanted that game so bad they could taste it. They wanted to build momentum towards their offseason and future while breaking our hearts in the process, and be able to say “see, no matter how bad it gets, we’ll always beat the Cougs.” Witness the skirmishes at the end, and there is no doubt UW gave a damn about this game. And to see Brink drive the team from our own 14 down the field and into the end zone, on the road, in that house of horrors, and FINALLY close the deal feels just amazing!

Hard, tough, gut-wrenching lessons were learned this year. 5 of our losses were by 4 points or less (UCLA by 3, Cal by 4, Stanford by 3, ASU by 3, Oregon by 3), and in 3 of those 5 losses, WSU possessed 10+ point leads in the second half, it makes you realize how fine that line is between winning and losing, and most of all, how hard it is for a young team to put another team away. It’s a process they must learn. I choose to believe that this year will pay off big in the coming seasons, and as much as it sucked to lose like this? Recent history shows that things WILL turn around in ’06.