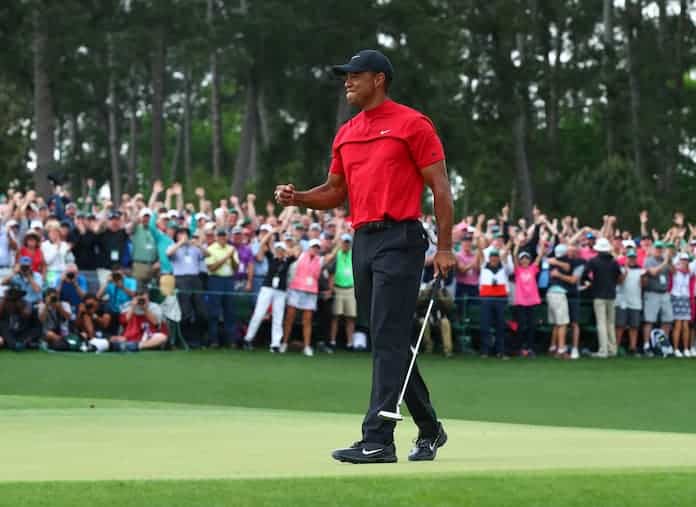 With Tiger Woods set to embark on his 23rd season as a professional golfer, we have decided to take a look back at five of his greatest wins. Having won 82 tournaments in total including 15 major championships, there are quite a few wins in the career of Tiger Woods to choose from.

Winning his first major in 1997, returning to glory and winning his 15th major at Augusta in 2019 – there have been some sensational performances in the career of Tiger Woods.

Be sure to check out our golf betting offers. Take a look and claim the best bookmaker free bets from our offshore partners. Also don’t miss out on the best online sportsbooks, where you will be able to bet on various golf markets week in, week out.

Counting down from 5 to 1, here are the best wins of Tiger Woods’ career in the eyes of The Sports Daily‘s golf expert… 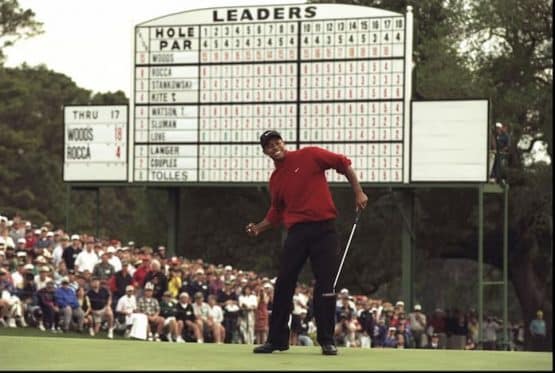 In at number 5 and kicking off our list of Tiger Woods’ five greatest performances is his first major championship victory.

Woods turned professional in 1996, and in his first appearance at the Masters as a pro, failed to make the cut. However, he put this right 12 months later in the most remarkable way.

Woods had already won on the PGA Tour before his first major triumph, but this was the true announcement to the world as to who he was. Woods put the entire world on notice as a huge force to be reckoned with in the world of golf.

Despite only being 21-years-old at the time, Woods put on a dominant performance against the best players in the world. After an opening round -2 par, Woods was three shots off the pace, as John Huston carded a 5-under par 67.

It was the second round when Woods began to exert his dominance on the field. After 18 holes on the Friday, Woods had his first ever lead in a major championship sitting at -8 after 36 holes. After Day 3, Woods was out of sight. His 7-under par round of 65 gave him a nine shot lead of Constantino Rocca with one day remaining.

It wasn’t in Woods’ mind to coast to a win on the final day. Instead, the American youngster carded yet another -4, finishing on 18-under par after 72 holes. His nearest competitor, Tom Kite, finished an astonishing 12 shots behind Woods, which was the biggest winning margin until Woods broke his own record the following year at the 2000 US Open. 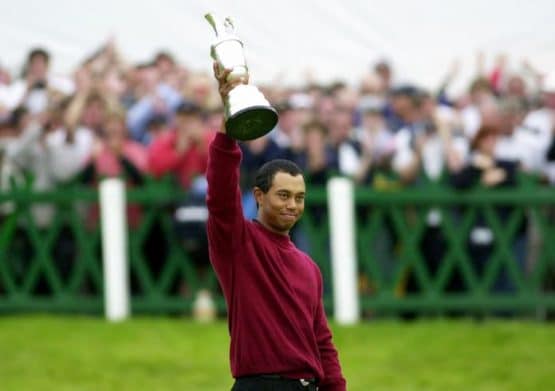 In at number four is Tiger Woods’ victory at the 2000 Open Championship at the home of golf, St Andrews. Only five players in the history of the sport have won the career Grand Slam. That means winning at least one title in all four majors: The Open Championship, The Masters, US Open and PGA Championship.

Only Jack Nicklaus, Ben Hogan, Gary Player and Gene Sarazen had accomplished this feat, with Woods adding his name to that legendary list after the 2000 Open Championship. After one round, Woods was one shot behind Ernie Els, shooting a 5-under par 67 on a strong opening day of golf.

It was the second round on Friday that Woods took control of the tournament, carding a 66 giving him a three shot lead going into the weekend. Into the weekend and Woods went from strength to strength. It was clear that Tiger was head and shoulders above the rest of the field, shooting a 5-under par 67 to open up a six shot advance with just one round remaining.

Come the end of the tournament, Woods won by eight shots. In the process, he became the younger player in the history of the sport to achieve the career Grand Slam at the age of just 24. That record was previously held by the great Jack Nicklaus, who won the Grand Slam at 26-years-old. Quite a remarkable feat by the great Tiger Woods. 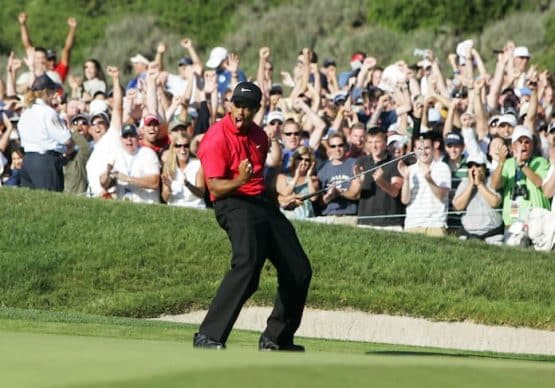 In at number three and possibly unlucky not to finish higher on this list is Tiger Woods’ triumph at the 2008 US Open at Torrey Pines, giving him his 14th major championship title.

Woods was a heavy favorite to win the event, despite having limited practice prior to the tournament due to an ongoing knee injury. On Day 1, Woods was a bit off the pace, carding a +1 par round of 72. He was four shots off the lead after the opening 18 holes, but after Round 2 Woods was just one shot off the pace thanks to a 3-under par 68.

After 54 holes, Woods took the lead after a 1-under par round of 70. However, it was becoming apparent that Woods’ faulty knee was bothering him. On Sunday, the final 18 holes at Torrey Pines, Woods saw a three round lead in a major disappear for the very first time in his career. His +2 par round meant he finished in a tie with Rocco Mediate, with the play-off taking play over 18 holes on the Monday.

Teeing off on the 18th hole of the play-off, Woods trailed Mediate by one shot. Woods needed a birdie to force a sudden death play-off, if Mediate was to par. Woods did just that. The then 13-time major champion holed an exquisite long range putt, forcing the sudden death hole.

On the 91st hole of the week, Woods scored a par, whilst Mediate could only claim a bogey, handing Woods his 14th major title. What makes this major triumph even more amazing was in the aftermath, when it was revealed that Woods had won the even with a partially broken leg and a torn ACL. This just shows what winning means to Woods. Not even a broken leg could get in the way between him and winning a golf tournament. 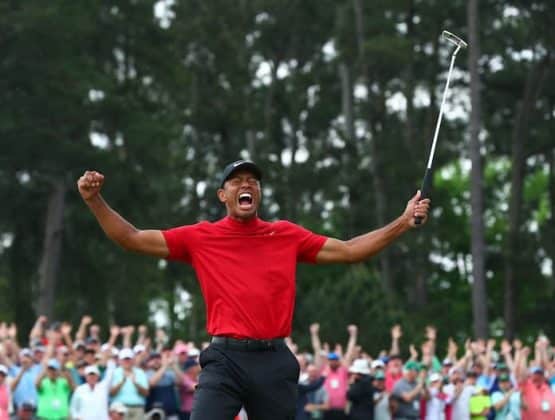 In at number two is perhaps the most amazing and greatest sporting comeback in history. We are of course talking about Woods’ triumph at Augusta National at the 2019 Masters.

After a plethora of injures and off the course issues, it was almost a foregone conclusion to golf fans that Woods would never win another major championship. People though that Woods’ 2008 US Open win would be his last major, but in typical Tiger Woods fashion, he once again proved the world wrong.

Woods carded a decent 2-under par opening round, but was four shots off the pace already. On Friday, Tiger began to get motoring as he found himself just one shot back of the lead. After 54 holes, Tiger was two shots behind Francesco Molinari, who had carded a quite brilliant 6-under par 66 on ‘moving day’ to lead going into the final round.

Come Sunday, the final day of the 2019 Masters, the round was quite odd as it had to be moved forward considerably due to impending storms in the area. Rather than a late afternoon finish, it was much earlier in the day when the rounds were over. For the first time in his career, Woods had to come from behind to win a major championship. That is quite a remarkable stat, considering he had previously won 14 of them. It just shows the sheer dominance of Tiger Woods during his prime.

Woods did just that, and was even able to bogey the 72nd hole and still win by one shot to the likes of Brooks Koepka, Xander Schauffele and Dustin Johnson. The celebrations were spectacular. Woods had returned to glory in quite remarkable style. All of his off the course issues as well as his niggling injuries were put behind him as he lifted his 15th major championship and put the Green Jacket on for the fifth time. 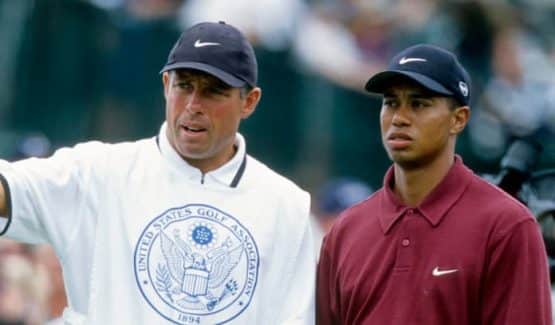 In at number one due to the sheer dominance of the tournament is Tiger Woods’ win at the 2000 US Open. Pebble Beach took centre stage and was set up to the usual US Open standards, with wind wreaking havoc over the four days and playing conditions generally being super tough. That was for everyone except for Woods of course.

On the opening day, conditions were favorable, with Woods shooting a 6-under par 65 to grab the lead after one round. Woods was one shot ahead of Spaniard, Miguel Angel Jimenez. On Friday, the bad weather began to kick in and affected everyone in the field, bar Woods. Woods shot another under par round of -2, giving himself a six shot lead heading into the weekend.

On the Saturday, Woods shot a level par 71, which in the conditions was a remarkable score. His lead had stretched to 10 shots with 18 holes remaining. It was clear nobody was going to catch him, it was just a matter of how many shots Woods would finish ahead of second place.

On Sunday, the conditions were just as bad. the severe winds coming from the Pacific Ocean made the whole field wilt. Except for Tiger Woods. Tiger shot a 4-under par 67 to finish at 12-under par after 72 holes of golf. What makes this more remarkable is the margin of victory. Woods won by 15 shots. His nearest competitor finished on +3 par. Complete and utter dominance from Woods who claimed his first US Open title.

It is fair to say that there has never been quite an example like this one of one player being so considerably better than the rest of the field. There have been quite a few dominant performances in major championship history of course, with Woods being on the giving end of  a lot of them, but none more so than the 2000 US Open. Woods completely dominated the tournament and put on a pure golfing masterclass.

To this day, it is still the most dominant display in major championship history. Woods was the only man to finish under par, putting on a real show of golfing excellence in what were meant to be treacherous conditions.

There are so many sensational performances from Woods we could have included in this list. His 2001 Masters triumph, his 2002 Masters win or his 2006 Open Championship victory to name but a few. However, these were the five most impressive displays of golf we think we have ever seen from the great man that is Tiger Woods.