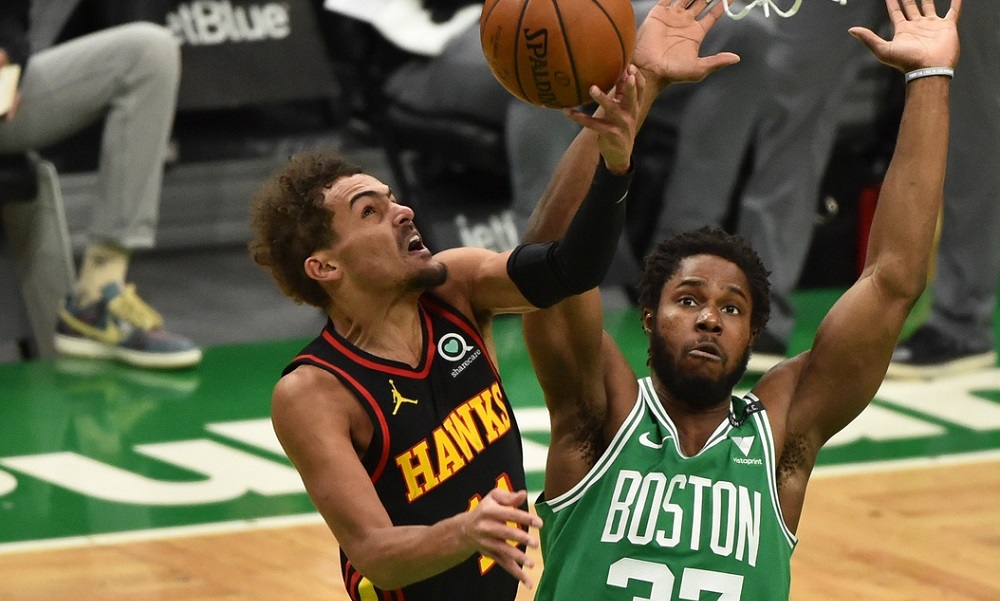 Wednesday was another bad night at the gym on Causeway Street because, once again, the Celtics couldn’t get stops against a team they were expected to beat. The Cs lost to the Hawks, 122-114, their fifth loss in the last seven games. Boston is now 14-14 and Atlanta is 12-16.

Here are five (supposedly) rational thoughts, starting with the bad and finishing with some bright spots.

Atlanta made 57.1% of their field goal attempts, the highest percentage against the Celtics this season. They also scored 60 points in the paint. The Hawks took the lead with 6:53 remaining in the second quarter and never gave it back. The Cs were unable to string together the defensive stops needed to make a rally.

If this sounds familiar, that’s because it happened twice last weekend versus the bottom teams in the East. Against Detroit, the Pistons broke a tie with 6:38 to play in the third quarter and never looked back. In Washington, the Wizards took the lead just 1:20 after the opening tipoff, the only lead change of the day.

Back to last night, Trey Young torched Boston for 40 points, making it four straight games that an opponent has gone for 30 or more (Saddiq Bey 30, Bradley Beal 35, Nicola Jokic 43). Marcus Smart is injured, sure, but the Celtics need to overcome that, no excuses.

The Celtics are now fifth in the East, just ahead of the 14-16 Knicks. They are 2-5 against the other teams in the top six, and 10-9 in the conference. There’s no opponent they can assume they will beat. Getting healthy will help, but only if they also start playing harder.

Jeff Teague played 9 minutes, half of them inexplicably in the fourth quarter. He finished with 0 points, 0 assists, 3 fouls and 3 turnovers. Fans recognize his signing has been a failure, and last night the media joined in to wonder why he’s seeing any minutes.

Teague had played in just one of the last three games. Didn't play in the first half. Checked in and has 3 turnovers and no points in 7+ minutes.

Not sure what Teague has done to earn minutes at this critical point.

I get being frustrated with Teague playing in the second half, let alone the fourth quarter. That's pretty baffling.

But let's recognize Boston is missing three starters. The rotation is always going to be a mess when that happens. Especially on a back-to-back.

Payton Pritchard was fairly effective (11 points, 2 assists) and, to be fair, did get into foul trouble. Still, it’s puzzling that he played only 6:33 in the second half, less time than Teague.

Coach Stevens, long recognized as one of the league’s best, has recently come down to earth in the eyes of many fans. Losing will do that to you, and so will weird coaching decisions, such as discussed in the items above and below here.

Maybe Brad isn’t really the problem, but he must at minimum share in the blame of a season that is not meeting expectations. The fan unrest gets louder with each loss.

“I just want to give this kid more minutes.” — @celticsvoice on Robert Williams

Attention, Brad: If Mike Gorman says it, that makes it official. Timelord must play more.

He’s earned it. In the past two games with Daniel Theis sidelined, Rob played 19 minutes against the Hawks and was 4 of 5 for 8 points, plus 2 blocks. Against Denver, he made all 4 shots and had 8 rebounds and 5 steals.

For the season, Williams averages 15 minutes per game and is shooting 72.7% (!). His finishes on lob passes to the rim have been electric, and the Celtics certainly need that energy. Tristan Thompson has been okay, but Rob should be ahead of him because of his potential and because, unless he’s traded, he’ll be with Boston long after Thompson leaves.

After being DNP-CD 15 times in Boston’s first 25 games, Aaron Nesmith is  solidly in the rotation. He’s averaged 24.6 minutes, 5.3 points and 5.0 rebounds in the past three games, and impressed just about everyone with his defense and hustle. He plays hard, which can’t be said about all the Celtics all the time this season.

Have to wonder if the Celtics are showcasing Nesmith for a trade, or if Brad saw what Detroit’s rookie Bey did to the Cs and decided to find out just what his own rookie can deliver. Fans definitely approve of Nesmith’s effort.

Nesmith out here blocking shots with his whole body.

Nesmith is willing to Die, and I like that

Nesmith is FLYING around hahaha i love it