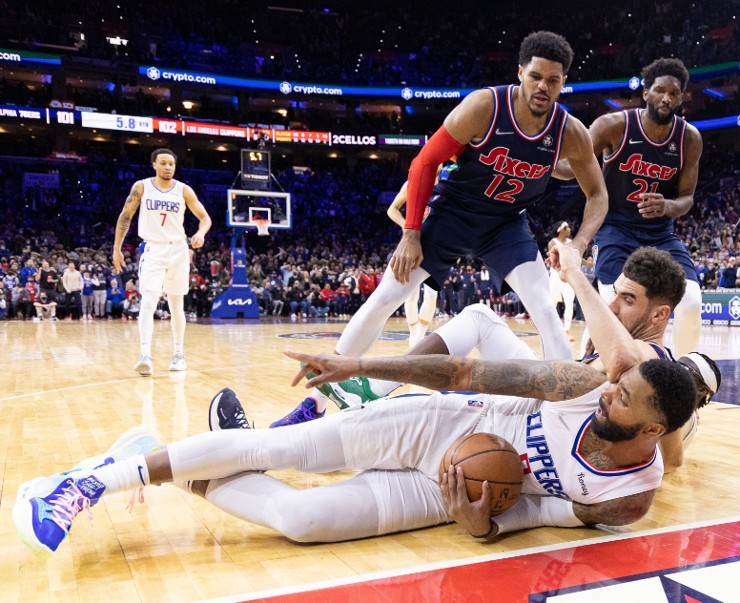 For Friday night’s cross-conference rematch, the Philadelphia 76ers are preparing to defeat the Los Angeles Clippers at Crypto.com Arena; free NBA picks are featured here. Philadelphia is averaging 108.71 points per game and shooting 46.17% from the field. Keep reading for 76ers vs Clippers preview content.

Will Reggie Jackson and the Clippers quell their four-game losing streak? Jackson is averaging 16.9 points and 4.8 assists per game this season. In addition to the injury report, prediction and odds, free NBA picks are posted below.

Leading into this interconference matchup, the 76ers are 5.5-point favorites on the road. Philadelphia is 33-15 as a favorite, 12-12 as an underdog and 20-14-1 ATS away. Along with the betting data listed above, the Sixers’ over/under record on the road is 18-16-1. The team is 1-4 ATS in its past five meetings versus Pacific Division opponents.

On the other side, Los Angeles is 23-13 as a favorite, 13-24 as an underdog and 16-19 ATS at home. They are 2-6 in their previous eight matchups against Eastern Conference teams. BetOnline odds are available below.

All 76ers vs Clippers betting odds were retrieved from BetOnline.

Nearing the end of the 2021-22 NBA regular season, the 76ers rank third overall in the Eastern Conference. They trail only the Bucks and Heat. However, the top four teams are all within just a couple of games. Philadelphia’s conference record is 27-17. As for the Clippers, they hold the eighth spot in the Western Conference. Of course, their conference record is 21-26.

Pertaining to the last three head-to-head meetings, the Clippers are 2-1 versus the 76ers. On Jan. 21, Los Angeles defeated them 102-101 at Wells Fargo Center. Tonight’s matchup is the second time these playoff contenders have faced off during this regular season. Philadelphia last bested Los Angeles on Apr. 16, 2021, winning 106-103 at home.

it's game day once again!

76ers are shooting towards a third straight victory

Additionally, the 76ers are 6-4 in their past 10 games played. After earning wins over the Heat and Lakers in the last few days, the Sixers are aiming to extend their winning streak to three games. In their 126-121 road win over the Lakers on Wednesday, center Joel Embiid closed out his performance with one more double-double.

Embiid amassed 30 points, 10 rebounds and 3.0 assists in 34 minutes of action. The five-time All-Star is making a serious case to win the MVP award. Anyway, James Harden ended his outing with 24 points, 7.0 rebounds and 7.0 assists in 37 minutes played. Philadelphia will have to take full advantage of its healthy roster in the weeks ahead.

Moreover, the Clippers are 3-7 in their previous 10 contests. They have not won a game since Mar. 13, when Los Angeles defeated Detroit 106-102. The team’s four losses came against the Cavaliers, Raptors, Jazz and Nuggets. On Tuesday, in the Clippers’ 127-115 road loss versus the Nuggets, Terance Mann scored a team-high 24 points in 35 minutes played.

Moving on to the point spread consensus, 74% of gamblers are putting their bets down on the 76ers to cover the spread at Crypto.com Arena. After checking out the point total consensus, 80% of bettors are anticipating the total will go over 219. The Sixers are 4-1 in their last five matchups against Western Conference opponents.

Referencing ESPN’s Basketball Power Index, the 76ers have a 65.2% probability of winning.

Also, the Clippers are 1-4 ATS in their past five home games versus the 76ers. Lastly, keep in mind that the total has gone over in seven of Los Angeles’ previous nine home games. Therefore, pick the 76ers to win, they will cover the spread and the total will go over 219. More NBA picks are on the main page.

BetOnline is one of the top sports betting sites in Pennsylvania and California.