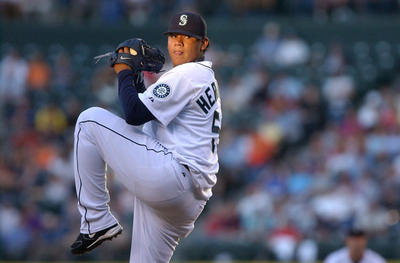 His fastball was unreal, at the knees almost every time. Many scouts and coaches will say that it’s very hard to throw with that velocity at that location. That’s just flat-out FILTHY. His curve was mesmerizing, he threw it so well, that only a few times did it not break at or below the knees. The strikeout of Joe Mauer in the first inning, on a curve ball, was freakish. That curveball broke at least 2 feet, and from a side replay, Mauer’s bat was NOWHERE NEAR hitting the ball. He missed it by the same 2 feet.

His poise is incredible. Not that there is a large body of work to compare a 19-year old starter with in the big leagues, but he’s off the charts right now with his poise, especially with the ease in which he fielded his position and as Hargrove said, “[Hernandez] just got back on the mound, threw a strike and got the next guy out,” Hargrove said. “That’s what you like to see out of your people, whether they’re 19 or 90. He didn’t stew around and feel sorry for himself. He got the ground-ball out and picked [Beltre] and the rest of us up.”

From his first 4 batters of the Detroit start to last night, nothing fazed him. How about his location and control? He was down, down, down, and even if/when he missed above the belt, he’s throwing so hard that he can get away with it.

His endurance is amazing. 97 in the 8th inning, on his 95th pitch? What an amazing start.

Still no extra-base hits allowed, 10 singles in 13 IP. Many infield dribblers and a few broken bats to boot.

I heard Dave Valle say on the radio broadcast that the change, in order to be effective, needs to be at least 10 mph slower than the heater, and thrown at the same arm slot, with the same arm speed, and the best changes of all time also sink…his was 16 mph slower on average, same slot, same speed, and was moving everywhere. Actually all of his pitches were thrown from the same slot, and same arm speed. Valle also went on to say that he a HUGE difference so far that he’s seen from Felix even back to spring training is that he’s not trying to strike out the world! He’s trying to be a great pitcher, another thing that seperates him from some of the young power guys like Kerry Wood. He said you can tell the guys that are trying to whiff everyone when they are racking up huge pitch counts, and consistently missing high with 2 strikes. That’s a sign of serious overthrowing and per Valle, it appears Felix is just trying to get guys out any way possible and doesn’t care about K’s. That approach is going to keep him playing at a high level in this league for a LONG time!

Physically he reminds me of Freddy, only thicker in his lower body (have you seen how huge his legs are? It’s no mystery where he gets that power. Jeez!).

His motion is similar to Freddy, but it’s not as herky-jerky. It’s a lot more smooth, and it appears it’s more “repeatable”, a phrase scouts say is important and one of the biggest problems Kerry Wood has in staying consistent is because his motion is so violent and all over the place that it’s hard to fix him when he’s off. Wood also puts unbelievable strain on his elbow and shoulder, as his injuries will attest. With Felix? It’s like every time he threw the ball his motion was a replay of the last pitch. He’s not as perfect in his mechanics as Mark Prior, but he’s pretty spectacular.

So, the real question – can he actually get BETTER? Is this the best it will ever be? Will the league figure something out, like maybe he’s tipping his pitches, something small like that? Because I’ll tell you, when you can bring the noise that hard, and you can also throw strikes with a hammer cuvre and devastating change, you are talking Pedro in his prime…but with more velocity??

AND HE’S NINETEEN YEARS OLD?? TO put that in perspective, look at the Everett Aquasox short-season A ball team, and look at the ages of those kids. If Felix was on that team, he would be the SECOND YOUNGEST PLAYER, just one guy was also born in 1986!

The future is bright my friend. Oh yeah, my man Betancourt smoked a triple to win the game too. Did you see his wheels around the bases on that triple? Not only is he a vaccum, he can fly.

Here’s a good read from Baseball Prospectus, witnessing first-hand Felix and his dominance: