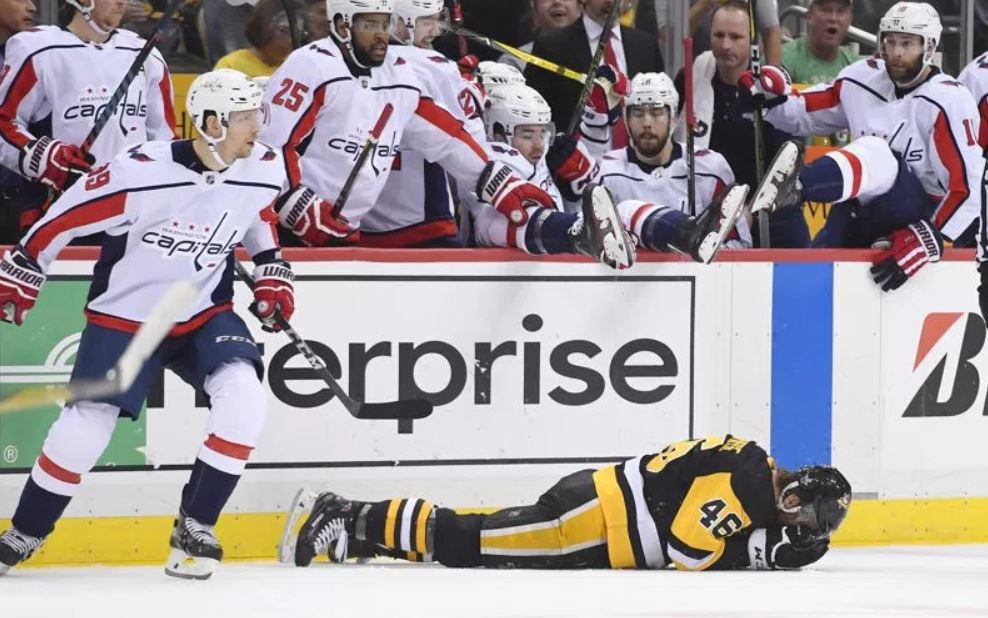 I was set today to sit down and write a story about being disappointed in the discipline handed down by the Department of Player Safety (DoPS) to Tom Wilson for his hit on Zach Aston-Reese. What I got instead was the DoPS surprising me. For his illegal check to the head of Zach Aston-Reese, Tom Wilson was suspended three playoff games. In the below video George Parros breaks down why the league chose to suspend Wilson in a step-by-step manner that’s really concise and a good watch to understand the situation.
[protected-iframe id=”60a47c51f2792e32819d424ad5d112ef-142507471-57617301″ info=”https://www.nhl.com/video/embed/wilson-suspended-3-games/t-277440360/c-60214803?autostart=false” width=”540″ height=”360″]

This ruling is better than I could have expected:

But let’s not mix words here, it’s not enough. Tom Wilson and those like him are a predatory group. They look for young, inexperienced, or small players when they can. They find players in vulnerable situations and obliterate them. Let’s take a look at Tom Wilson’s three recent post-season series (16, 17, 18) against the Penguins to illustrate some of the ridiculous hits he’s laid. Because after all, once is an accident, twice is a coincidence, three times is a pattern.

In the above clip, Tom Wilson hits Conor Sheary knee-on-knee as the Capitals player heads off the ice. For the above infraction, Tom Wilson was fined $2,400 after the game ended. This hit is hardly remembered because it came in a series where players from both teams were suspended for illegal checks but this is still pretty gutless. Take note of three important facts when watching this clip: 1. Conor Sheary was a rookie
2. Wilson was not assessed any penalties in the game for this hit.
3. Wilson delayed his departure from the ice risking a too many men penalty for his team in order to complete this hit.

It’s a two-for-one! Yes in this clip Wilson not only crushes Trevor Daley but also flattens Jake Guentzel. For this play, Wilson was assessed a charging minor but it’s the only one of these examples he was assessed a penalty for in the game. This single shift alone should be enough for the NHL to have a talk with Wilson. You can’t just wreck two players in one shift in the first period of a game willy-nilly. Important notes to make from this clip:
1. Wilson flattened two players in six seconds (from 13:57 to 13:51 on the game clock).
2. Again, Jake Guentzel was a rookie in his first playoffs when this infraction occurs.
3. Wilson asks the referee “are you F***ing kidding me?” from inside the penalty box. The fact he doesn’t understand why he just got sent there in the first place should be a big red flag to the NHL.

No, this is not the play Wilson was suspended three games for. This is the play he should have been suspended for prior to that play which could have avoided the injury to Zach Aston-Reese. In this play, Wilson comes from behind Dumoulin who is squaring up for a hit from his front from Alex Ovechkin. Alex Ovechkin lays a clean check on Dumoulin. Problem is Tom Wilson is hunting the Penguins defenseman for three seconds prior. Wilson follows Dumoulin behind the net and lines him up. He’s so intent on Dumoulin, he doesn’t care to look at see that Ovechkin is coming over to give a solid hit. No, he’s got his blinders on. He smacks violently into Dumoulin causing the Pittsburgh skater to smack into Ovechkin at a higher rate of speed. Important notes here:
1. Dumoulin was in a vulnerable position that Wilson had time to correct for
2. Wilson could have looked and seen Ovechkin coming and laid off from the hit but didn’t

So then we get to the next game. The DoPS gave Wilson the benefit of the doubt, which the above evidence would suggest he did not deserve, and what did he do with it? Broke a 23-year-old’s jaw requiring him to have surgery. Two important notes about this hit that aren’t mentioned in the video:
1. Tom Wilson was at the end of his shift. He had ample time to get off the ice or change course to avoid Aston-Reese.
2. Wilson was seen, as Aston-Reese was attended to, laughing on the bench.
While Barry Trotz says his player was not laughing at the other player’s injury it was still not a good look. It also makes it harder for the DoPS to believe anything Wilson said about not meaning to injure Aston-Reese.