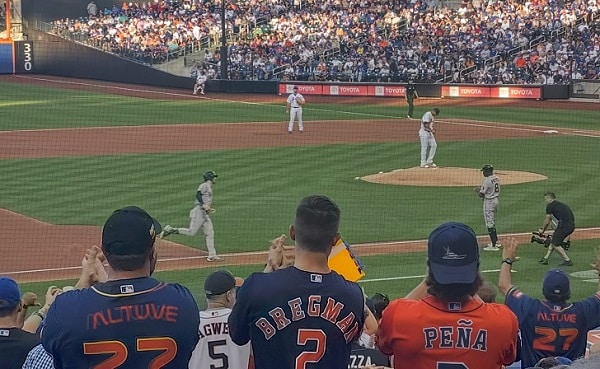 I had posted a picture of Citi Field on a form of social media and used the quote: “A bad day at the ballpark is better than a good day anywhere else.” Little did I know that Carlos Carrasco, among others, would put that quote to the test.

Let me sum up: My Polar Burger 2.0 was damn near pink, and before I could develop salmonella Carrasco had given up four runs to the Astros in the first inning for his second straight start. Thankfully his pace was better as he actually got an out before giving up the four runs. So that was a bright spot. Also bright spots were the weather, the excellent company, and the good seats that I had, which was filled with … Astros fans.

Seriously. Look at the picture above, which was taken as Kyle Tucker was rounding the bases after his first inning three run dinger off Cookie. I was surrounded by Bregman jerseys and Alvarez jerseys and a bunch of jerseys that were of the Space City variety, one of which was personalized with the name “Sexy Marco” and the number … you guessed it: 69. There was also a Jose Cruz jersey, a Colt .45’s jersey, and then at the end of the night I saw someone with the nerve … the nerve … to wear a Mike Scott jersey. The U*ley jerseys are bad enough but he has played in the past decade. A Mike Scott jersey? You have to work for one of those.

Chasen Shreve gave up not one but two 2-run homers in the fifth. One to Yordan Alvarez, and another to Yuli Gurriel. I was having my own problems as half the Arancini Bros. menu was sold out and I had to settle for pizza flavored rice balls like a g*d damn savage. (But hey, they were cooked.) I got off the line saying “what is it, 9-0 now?” (Editor’s note: I was f**cking kidding.)

The rest of the night was marked by a heroic one run comeback down by nine runs where James McCann was late on a 3-1 fastball from the nine run lead specialist on the Astros roster. But McCann gutted out a walk before Ender Inciarte ended the game with a ground out to first base. (Inciarte, by the way, went 0-for-2 in his Mets debut and reportedly did not fire his agent after the game because he wasn’t a Brave anymore.) The Mets lost 9-1 on Pink Meat Polar Burger Night at the ballpark. So was this day better than a good day anywhere else? 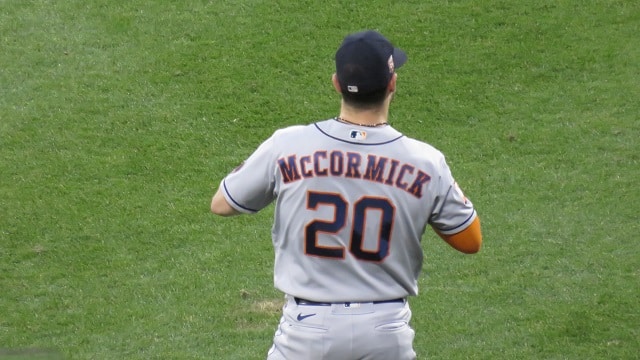 Major League Baseball players are not named “Chas”. You know who is named Chas? Whenever there are 16-year-olds hanging out on the corner at night that are looking for a 24-year-old with a legit ID to buy them beer, that 24-year-old is always … always … named “Chas”.