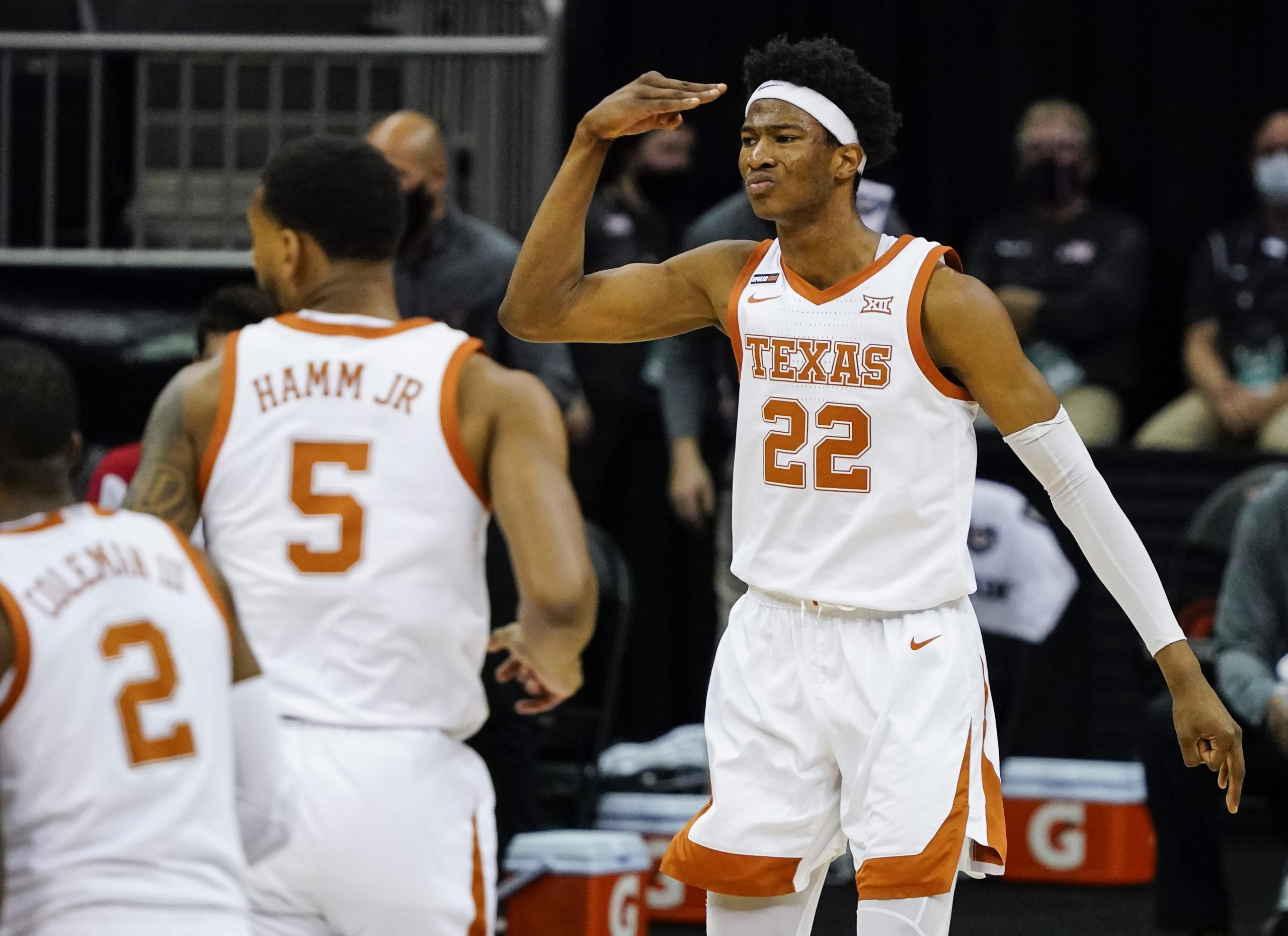 It’s no question that the Sacramento Kings need change in the defensive  department this upcoming offseason. Ranking dead last in defensive rating last season, allowing the most points per game and the second-worst defensive rating of all-time. Yes, all-time.

It makes total sense that the Kings would “love to take a bigger wing/forward with defensive acumen at No. 9,” per The Athletic.

Kai Jones, Moses Moody and Franz Wagner will offer just that: length and defensive versatility. But this article is about why Jones makes a lot of sense for the Kings right now and for the future.

Jones is a 20-year-old, 6-foot-11 center with a 7-foot-1 wingspan out of Texas. Jones only started playing basketball at the age of 15 when he moved to the United States from the Bahamas. Before that, he was competing in track competitions and it shows – considering his crafty footwork and explosiveness.  His athletic ability combined with his impressive measurements, allow him to do it all on both ends of the floor, whether it’s on offense or defense.

During his time in Texas, Jones did a little bit of everything on the offensive end. Despite his skinny frame, he proved how easily he can get past opponents and score in the paint. His explosiveness and length really gave him an advantage.

Jones ranked in the top 86th percentile in the country in transition, which is where most of his points came from. Why in transition? That’s how Texas utilized him in the 22.8 minutes he was given every game.

Jones also shot 75.8 percent while in transition and these weren’t all just simple passes that lead to an easy layup like most centers you would see in the NCAA. He was different, some of his possessions were all done by him with no help. Jones was used to getting the defensive rebound, taking it across in transition and beating multiple defenders to score.

I do expect Jones to excel in this category even more with the Sacramento Kings considering he’ll be playing alongside De’Aaron Fox and Tyrese Haliburton. Fox and Haliburton can easily get Jones open in the halfcourt for an easy bucket. Using Jones in transition or in the pick and roll with Fox or Haliburton will benefit all parties making this a potentially good trio.

1st clip: Jones starts by showing his defensive awareness, as he was in the right place to get the steal. He takes it up the court, beating two defenders with a Eurostep to get the fast-break dunk.

2nd clip: Jones gets the defensive rebound, which is one of his many strengths and is able to take the ball from his own paint, blow by five defenders and get the easy layup.

3rd clip: Jones starts off by racing past three defenders making it a 3-on-1 situation. Texas is able to take advantage of this by just throwing up the ball and letting Jones do what he does best.

Jones can get to the rim in the half-court too, he doesn’t need that setup he gets in transition to succeed. He’s shown how well he can easily get to the rim.

And when Jones does cut to the rim, he isn’t afraid at all when facing his man in the paint. He loves going for the big highlight dunks. Jones cutting to the rim from the 3-point line on his own is something you don’t see bigs doing much in the NBA.

Jones is comfortable with pump faking to finish at the rim and using the Eurostep plenty of times a game for an easy two-points.

In both of these clips, Jones is able to cut to the rim on his own. His footwork seems great seeing how he changes momentum through a series of jab steps and pump fakes. On top of that, we see Jones finish on multiple defenders at the same time.

Another notable move for Jones when cutting was going for a fadeaway. Jones made 72 percent of his close shots.

Jones has shown that he can be a solid 3-point shooter at the next level. He shot 38.3 percent from the beyond the arc, making 13 out of his 34 attempts. He may be viewed as inconsistent by many people, but his makes weren’t just wide open shots. Jones was making behind the back step back 3-pointers and even pull up 3’s with defenders right in front of him.

In my opinion, Jones doesn’t get talked about enough on the defensive end. He plays with so much intensity and hustle that leads to a lot of steals. Jones’ awareness also allows him to lock up any player he wants as he seems to always stay in front of his man.

Cunningham tries to pull every move he can on Jones, but Jones doesn’t budge which forces Cunningham to cut in, leading to any easy block.

Jones is showing his ability to keep up with top level players, his footwork and fluidity at that size is very impressive.

Going forward, I can definitely see Jones guarding 1 through 5. Jones is fast enough to guard the point guard and shooting guard position and has the size to guard the forward and center position.

His explosiveness on the offensive end also translates to the defensive end, which allows him to be a good shot blocker, also thanks to his awareness and the timing of his leaps.

A concern for Jones is going up against bigger and stronger players. Jones struggles guarding these types of players, since they seem to go right through him. And this will only get worse in the NBA. If he wants to fix this, he will need to get stronger.

Overall, Kai Jones’ “rawness” and limited college production of 8.8 points, 4.8 rebounds, 0.6 assists in just 22.8 minutes during the 2020-21 season, seems to make many Kings fans worried about selecting him.

With that said, Jones remains to be my favorite prospect in this entire class considering his athleticism, versatility, high motor and upside. I would love to have him in Sacramento, especially with so much uncertainty surrounding Richaun Holmes’ return to Sacramento.