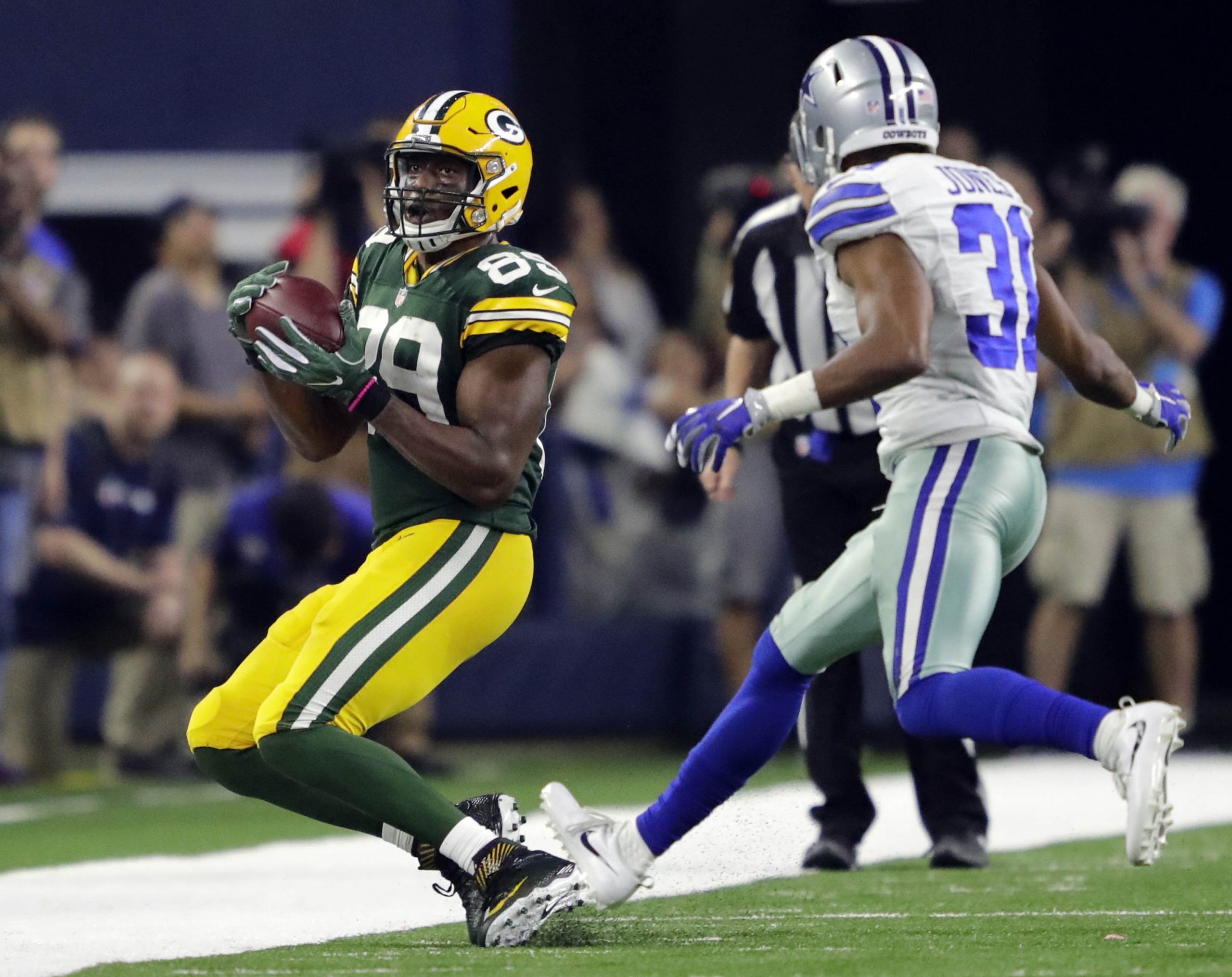 The Green Bay Packers have earned a bye in the 2019 playoffs, which means they will not play this weekend and will host a game in the divisional round.

Here is a look back at Green Bay’s top eight divisional playoff games, listed in chronological order. To qualify for this list, the game had to be played during the Super Bowl era and had to be a game where the winner advanced to the NFC (or NFL) Championship Game.

Vince Lombardi’s team was 9-4-1 in 1967 while the Rams finished 11-1-2 to win the Coastal Division. The Rams scored the most points in the league, gave up and the fewest and had just defeated the Packers in Los Angeles 27-24 in the next to last game of the season. They were led by quarterback Roman Gabriel and “The Fearsome Foursome” defensive line of Merlin Olsen, Deacon Jones, Roger Brown and Lamar Lundy.

The Rams were younger, stronger and faster than the Packers, but Green Bay had a team with a lot of playoff experience, and they had Lombardi who was trying to rally his team to an unprecedented third straight championship.

The Rams scored first on a 29-yard run by Bernie Casey but then the Packers took control of this game.

Travis Williams scored two rushing touchdowns and rushed for 88 yards in the game while Bart Starr completed 17-of-23 passes for 222 yards including a touchdown toss to Carroll Dale.

With the win, the Packers advanced to the NFC Championship Game against the Cowboys that season, better known as “The Ice Bowl.”

The Packers finished the 1995 season 11-5 and won their first division title in 23 years, but the NFC had been dominated by the Cowboys and the 49ers for years and most experts expected that dominance to continue.

The Packers had other ideas and made a statement early on the first play from scrimmage. Linebacker Wayne Simmons hit 49ers running back Adam Walker and he coughed up the ball. Cornerback Craig Newsome scooped it up and ran it back 31 yards for a touchdown and the Packers led 7-0.

Brett Favre tossed two touchdown passes in the first half, one to tight end Keith Jackson and another to tight end Mark Chmura and Green Bay led 21-0 en route to a 27-17 victory.

Favre finished 21-of-28 for 299 yards and the two touchdowns while both wide receiver Robert Brooks and Keith Jackson had more than 100 yards receiving. The Packers advanced to the NFC title game for the first time since the Ice Bowl and put the league on notice that the Cowboys and 49ers had company atop the NFC.

This game was played in a mud bath at Lambeau Field, but the Packers again jumped to an early 7-0 lead when Desmond Howard returned a punt 71 yards for a touchdown.

The Packers led 21-0 early in the second quarter after Favre found Andre Rison for a 4-yard touchdown pass and Edgar Bennett ran for another score from two yards out.

But the 49ers scored in the closing seconds of the half to make it 21-7 and then scored just 16 seconds into the third quarter when Howard was late coming onto the field for the opening kickoff and the Niners fell on the loose ball deep in Green Bay territory. Terry Kirby scored on an eight-yard run to make it 21-14.

The Packers pulled away with two second half scores. First, Antonio Freeman recovered a fumble in the end zone for the Pack midway through the third quarter to make it 28-14 and then Bennett ran 11 yards for a second score in the fourth quarter to give the Packers a 35-14 win.

Neither team was able to move the ball much in the mud with the Packers outgaining the 49ers 210-196. The big difference was turnovers, the Packers forced five including three interceptions of Elvis Grbac while Green Bay’s only turnover was the fumble of the second half kickoff.

The Packers defeated the Panthers a week later to reach the Super Bowl for the first time in nearly three decades.

The Packers were the defending Super Bowl Champions when they took on the upstart Buccaneers who were then division rivals of the Packers. This game became a defensive struggle for most of the contest.

Green Bay led 7-0 early on a three-yard toss from Favre to Chmura. Ryan Longwell booted a pair of second quarter field goals and the Pack led 13-0 at the half.

The Packers appeared to put the game away when Freeman returned the second half kickoff 90 yards for a touchdown, but the score was nullified by a holding penalty and the Bucs were still in the game.

Tampa Bay pulled to within 13-7 midway through the third quarter on a six-yard run by Mike Alstott, but the Pack sealed the win with Dorsey Levens’ two-yard run in the fourth quarter followed by a two-point conversion by Favre.

Levens finished the game with 112 yards rushing on 25 carries while Favre was 15-of-28 for 190 yards and one touchdown. Tyrone Williams and Mike Prior had big interceptions of Trent Dilfer in this game for the Packers who returned to the Super Bowl after defeated the 49ers in San Francisco in the NFC Championship Game a week later.

This game started out as a disaster for Packers running back Ryan Grant who fumbled twice in the opening minutes of the game. The Seahawks took advantage and owned a quick 14-0 lead just 4:01 into the game.

The Packers outgained Seattle 408-200 and advanced to the NFC title game against the Giants. This game would be Favre’s final victory as a Packer.

The Packers fell behind 14-7 after Eric Weems of Atlanta returned a kickoff 102 yards for a score in the second quarter but then Aaron Rodgers responded with the best playoff game of his career statistically to lead the Packers to a 48-21 blowout win.

Rodgers completed 31-of-36 passes for 366 yards and three touchdowns. He also ran for another score. His accuracy was uncanny and everything he threw seemed exactly on target.

Tyrone Williams made a 70-yard pick six late in the second quarter to put the Packers ahead 28-14 at the half and give Green Bay the momentum heading into halftime.

Green Bay created four turnovers to help fuel their blowout win and send them to Chicago for the NFC Championship Game.

The Packers overcame a 21-13 third-quarter deficit to defeat the Cowboys at Lambeau Field and advance to the NFC title game.

Aaron Rodgers finished the game 24-for-35 for 316 yards and three touchdowns including a 46-yard scoring toss to Davante Adams in the third quarter to pull the Pack to within a point and a 13-yard pass to tight end Richard Rodgers in the fourth quarter that gave the Packers the lead.

The Cowboys point to the infamous non-catch call on Dez Bryant when the Dallas wide receiver failed to hold onto the ball and complete the catch deep in Packers territory.

Eddie Lacy ran for 101 yards while both Adams and Randall Cobb went over 100 yards receiving for the game.

With the win, the Packers ended a four-game postseason losing streak against Dallas that dated back to 1982.

The Packers and Cowboys played a thrilling contest in Dallas that saw the game tied twice in the final five minutes and saw three 50-plus yard field goals kicked in the final two minutes of the game.

The big play was a 36-yards pass by Aaron Rodgers to tight end Jared Cook on 3rd-and-20 play with 12 seconds left in the game. Cook was able to drag his feet in bounds and fall out of bounds to stop the clock and set up Mason Crosby for the game-winning 51-yard kick as time expired.

The Packers led 21-3 but Dallas gradually clawed their way back into the game and tied it in the fourth quarter on a seven-yard pass from Dak Prescott to Dez Bryant. The Packers took the lead back on a 56-yard Crosby field goal, but Dallas answered with a 52-yard kick of their own to tie the game before Rodgers and Cook combined for their last-minute heroics.

Rodgers finished the game 28-of-43 for 356 yards and two touchdown passes. Cook had six catches for 104 yards and a touchdown while running back Ty Montgomery ran for a pair of scores for the Pack.

The Packers advanced to the NFC title game in Atlanta the following week. As of now, this remains the most recent playoff victory in Packers history.