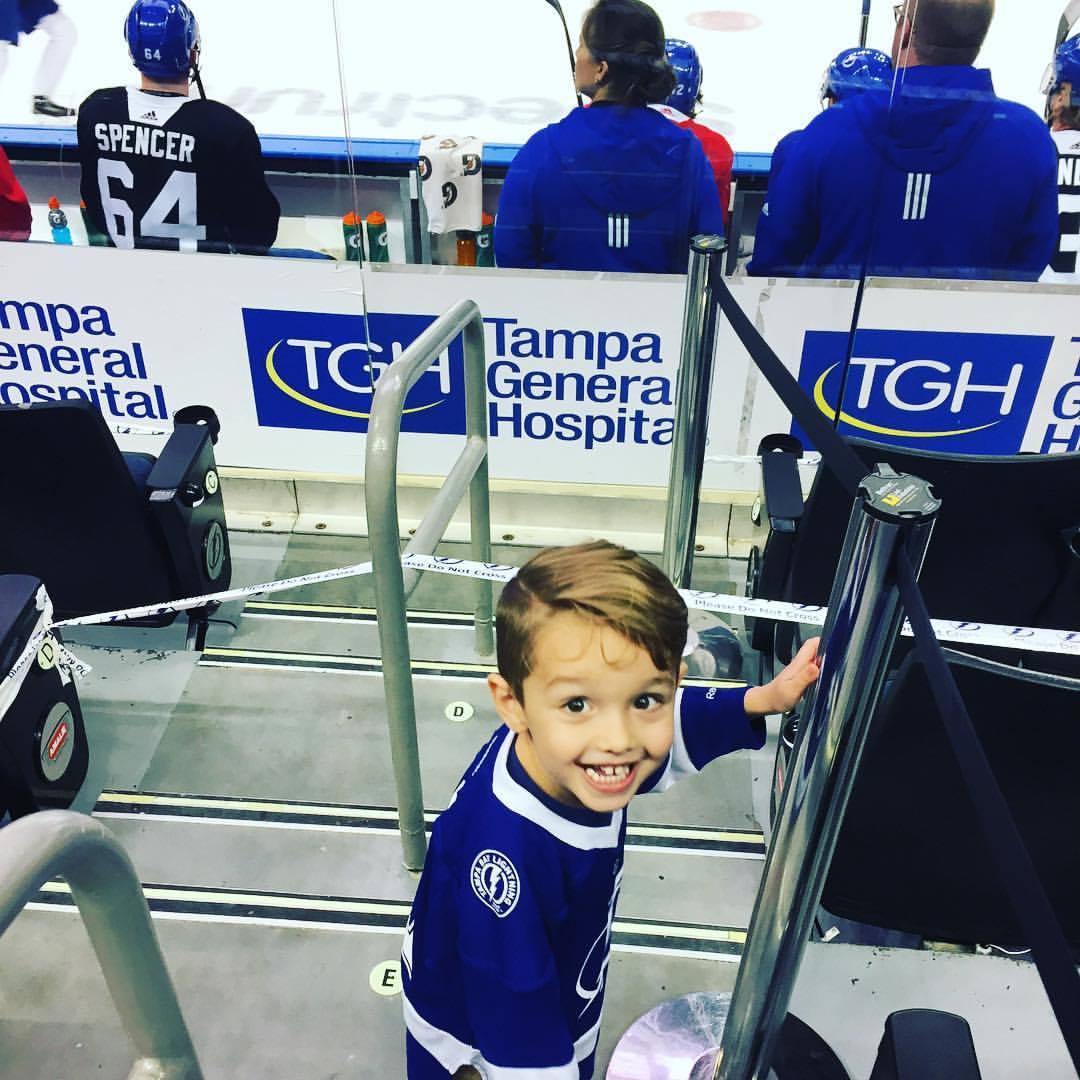 In what’s become a sure sign of a new season starting, Amalie Arena’s doors opened for this year’s Lightning Fan Fest on Saturday. The event has seen increasingly large crowds in recent years. Thousands of eager fans showed up bright and early to get their first look at the team before preseason games begin early next week. Doors opened for Season Ticket Holders at 8:30 am where they enjoyed an exclusive interview with General Manager Steve Yzerman. The first group of players which included captain Steven Stamkos, Nikita Kucherov, Ryan Callahan, and Andrei Vasilevskiy took the ice at 9 am. For many fans, it was their first glimpses of new acquisitions Dan Girardi and Chris Kunitz in Lightning sweaters. Head Coach Jon Cooper kept things going at a relatively brisk pace through a number of drills testing both offensive and defensive facets of the game. The second practice session featured a number of prospects and new draftees. Though festivities officially wrapped up at 2 pm, fans were able to watch the final practice of the day. Crowds had thinned but those who stayed got to see the likes of Victor Hedman, Tyler Johnson, and Ondrej Palat. The drills were kept largely the same for each session but there were a few notable things from each one. Steven Stamkos was moving well out there. He’s still testing out his knee and will likely continue to do so by seeing time in upcoming preseason games but it was great to see the captain back in action. Ryan Callahan was full of jokes, including going near Cooper by one of the benches and feigning grabbing his hip (don’t even joke about that, sir). Mikhail Sergachev was out with the first group and is an incredibly smooth skater. He’s beautiful to watch out there and didn’t look out of place in the least. Oleg Sosunov, the 6’8” defenseman, is huge. He’s already 220 pounds and is sure to fill in more. He moves quite well for being so big and it’s easy to imagine him ruining someone’s day as he matures. Even though it was just a practice, Nikita Kucherov was sniping away on Vasilevsky and seemed frustrated if he couldn’t get the puck past him. The drive to score goals seems to indicate that he’s ready to pick up exactly where he left off.

There was something to do pretty much everywhere you looked at Amalie Arena. There were kid zones where youngsters could try their hands on a rock climbing wall or a bungee-like contraption that allowed them to leap into the air and do flips. The Lightning Sled Hockey team was represented on the concourse. A gear sale had been set up for collectors looking to score items from one of their favorite players or grab equipment to use when playing at their local rinks.

St. Petersburgh mom, Megan Philp said that she and her two young sons Huck (6 months) and Pilot (3)  had a great time and that it was set up and run quite well. She said Pilot was yelling at Steven Stamkos, “to be careful and not get hurt.” Your mouth to the Hockey God’s ear Pilot!

Upon entering the building, the first 10,000 fans had the option to choose a voucher for a player photo or autograph. Two 45 minute sessions were scheduled to allow them to meet a Bolt one on one and bring home a souvenir from the day. This process had gotten a bit dicey in the past due to the large crowds. While the lines were lengthy, everything moved quickly and staff was on hand to ensure lines were orderly. Fans who chose to stay in their seats enjoyed interviews with the likes of team owner Jeff Vinik, Phil Esposito, and Dave Andreychuk. They detailed some of the upcoming events set for the 25th anniversary season like a celebration of the inaugural team in early October and one for the 2004 Stanley Cup winning team in November. We’ll have further information for you on those plans as they’re released. Fan Fest has come to mark the return of hockey in the Tampa Bay area. The only chill in the air is from a fresh sheet of ice at Amalie Arena. The familiar sounds of skates, sticks, and pucks rang out once again to signal the impending change in seasons. Preseason games get underway next week and we’re less than three weeks away from the home opener. There’s still a lot of excitement around this team and there are goals they still want to accomplish together. They have something to prove after missing the playoffs last year. Their window is most definitely still open. The Lightning are going to be a team to watch and Fan Fest offered the first glimpse of what’s to come.