About A Play: Spurs’ 3-Pointer off Hammer Screen vs Kings 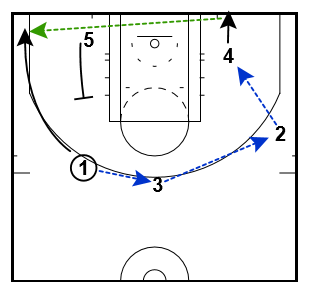 With 6:32 left in the third quarter Thursday, the San Antonio Spurs called a timeout in their game against the Sacramento Kings.

After the time out, the Spurs executed their Hammer screen play to get Patty Mills a wide-open 3-pointer. In  this ‘About A Play’ segment, we’ll break down this play, which the Spurs have executed in past seasons, but what was significant about using it Thursday, was how new players to the team were the one’s executing some of the crucial parts of the action.

The interesting part of this play is that the two new members of the Spurs (Gasol and Lee), were the two who had to execute the most critical actions of the play for it to work effectively, and they did. First, Lee had to make the difficult baseline pass that usually Boris Diaw and Manu Ginobili are accustomed to throwing for the Spurs. As you will see in the film clip below, for his first time trying the action in a game with the Spurs, Lee did an excellent job delivering the pass on the money to Mills.

The next critical aspect of the play is the Hammer screen, which was set by Gasol. The Hammer screen is so important for this play to work because the screener has to set an effective screen on the player defending the shooter, and if they don’t, then the shooter might not catch the pass with an open shot, or it could lead to an easy turnover. Gasol, though, delivered a solid Hammer screen.

Through two games, the Spurs’ coaching staff might be pleased to see some new members of the team already executing one of their important ATO (After Time Out) plays.