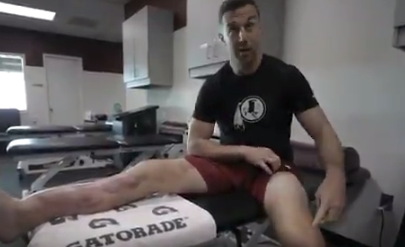 Redskins quarterback Alex Smith hasn’t played in a game since Nov. 18, 2018, but he’s been working to comeback from a brutal leg injury he suffered in that game against the Texans.

Smith was initially brought in to be the team’s franchise quarterback that season, but he didn’t even get to finish the year, and has since seen the team rotate a few other guys in since that time.

The leg injury Smith suffered was brutal enough, but what really complicated matters was the sepsis he developed from his first surgery. As a result, he went on to have 17 total surgeries, with some brutal scarring in the leg as well.

But even with all that, Smith hasn’t given up on playing football, which he shared in a video interview with E60, titled “Project 11.”

“Football might not be out of the question,” Smith said. “Can I go play quarterback again? Can I push it that far?”

When @Redskins QB Alex Smith broke his leg in 2018, no one thought it would take 17 surgeries to fix. Here’s a look at #Project11 pic.twitter.com/lwcj1l0fV6

It’s hard to envision Smith playing football again, even though he clearly still has a strong desire to play. He’d need to rehab his leg either way, for life off the football field, so that’s what he’s working on doing.