Analyzing the Greatest Packers Ever to Wear Numbers 56-60 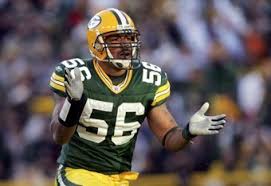 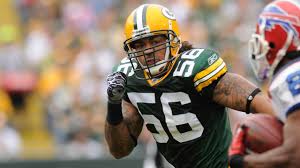 The Packers selected linebacker Nick Barnett with the 29th overall pick in the 2003 NFL Draft. The Oregon State product became an immediate starter as a rookie at MLB and was named to the NFL’s All-Rookie Team in 2003.

His most dramatic play came in 2005 when he returned an interception 95 yards for a touchdown in the Packers 52-3 victory over the New Orleans Saints.

Barnett was on the Packers roster in 2010, the year they won Super Bowl XLV, but he suffered a wrist injury early in the season and spent the rest of the year on injured reserve.

In eight seasons with the Packers, Barnett started all 107 games he played in and made nine interceptions and 15.5 sacks. He provided toughness and intelligence to the Packers linebacking corps and was a leader in the locker room.

The Packers released Barnett after the 2010 season, and he finished his career with the Bills and Redskins before retiring after the 2013 season.

Other notable Packers to wear number 56 include linebacker Tommy Joe Crutcher (1965-67, 71-72) who played on the Packers three straight title teams from 1965-67 and DE/OLB Julius Peppers (2014-16) who played three seasons with the Packers late in his career and contributed to the team’s pass rush. 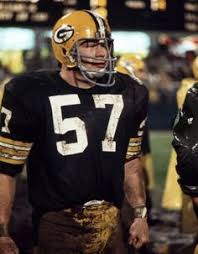 Center Ken Bowman spent 10 years in the center of the Green Bay Packers offensive line. The Pack selected the former Wisconsin star in the eighth round of the 1964 NFL Draft.

Bowman started six games as a rookie and then became the team’s full-time center for the rest of his career. In addition to playing football, Bowman studied law during the offseason and eventually got his degree from the University of Wisconsin while he was still with the Packers.

Bowman started for the Packers during their run of three straight championships from 1965-67. He played in each of the first two Super Bowls.

While Jerry Kramer got most of the attention, Bowman assisted Kramer on the most famous block in NFL history. He and Kramer double teamed Cowboys defensive tackle Jethro Pugh on Bart Starr’s game-winning quarterback sneak in the Ice Bowl that gave the Packers their third straight NFL championship.

Bowman left the Packers under less than ideal circumstances. He was the Packers union player representative during the players strike in July of 1974 and he was arrested along with several teammates for picketing a scrimmage between the Packers and the Bears. The team put him on the injured reserve list with a dubious back injury and he missed the entire 1974 season as a result. In 1975, he played with the WFL’s Hawaiians before the league folded and Bowman retired.

Bowman was always a tough and intelligent player who battled in the pits for the Packers for a decade. He was inducted into the Packers Hall of Fame in 1981 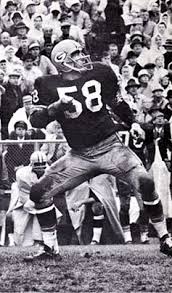 Dan Currie was the Packers first round pick in the 1958 NFL Draft. The Michigan State alum started seven games as a rookie and spent seven years as the Packers starting left linebacker.

Currie was selected to the Pro Bowl after the 1960 season when he made a career-high four interceptions and recovered a fumble. The Packers reached the NFL Championship Game for the first time under Vince Lombardi.

In 1962, Currie was named All Pro as the Packers went 13-1 and won their second straight championship under Lombardi. Currie made an interception in the 1962 title game against the New York Giants and returned it 30 yards during the Packers 16-7 victory. He also forced a fumble in the game.

The Packers traded Currie to the Los Angeles Rams in 1965 in the deal that brought Carroll Dale to the Packers. Currie played two seasons with the Rams before retiring after the 1966 season. 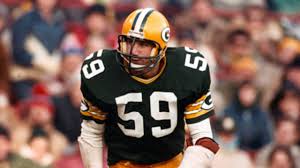 The Packers selected linebacker John Anderson in the first round of the 1978 NFL Draft out of the University of Michigan. Anderson made an immediate impact in Green Bay, starting at outside linebacker and intercepting five passes in his first season. He was named to the NFL’s All-Rookie Team that season.

Unfortunately, Anderson broke his arm late in his rookie season, an injury that would happen several times during his career.

Anderson was a smart football player and rarely made mental mistakes. In 1979, he filled in as the team’s emergency kicker in a game against the New York Jets, kicking one field goal and one extra point.

The Packers named Anderson their most valuable defensive player for three straight years and when he finished his career in 1989, he was tied with Hall of Famer Ray Nitschke for the franchise all-time lead in interceptions by a linebacker.

He was named to the NFL’s second team All-Decade Team for the 1980s and was inducted into the Packers Hall of Fame in 1996. 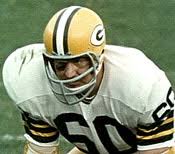 The Packers acquired Lee Roy Caffey in the trade that sent Jim Ringo to the Philadelphia Eagles in 1964. Caffey started immediately at right linebacker for the Packers and was a part of three consecutive championship teams for the Packers from 1965-67.

Caffey earned a Pro Bowl berth after the 1965 season and was named All-Pro in 1966. He made several big plays in big games including a sack in the Ice Bowl against the Cowboys and a fumble recovery in Super Bowl II against the Raiders.

The Packers traded Caffey to the Bears after the 1969 season along with Elijah Pitts and Bob Hyland for a first-round pick in 1970 which the Packers used to select defensive tackle Mike McCoy.

Caffey later played for the Bears, Cowboys and Chargers before retiring after the 1972 season.

Another prominent Packers player to wear number 60 was long snapper Rob Davis (1997-2007) who played for the Pack in Super Bowl XXXII.