Andy Murray Has Undergone Sweat Testing Ahead Of US Open 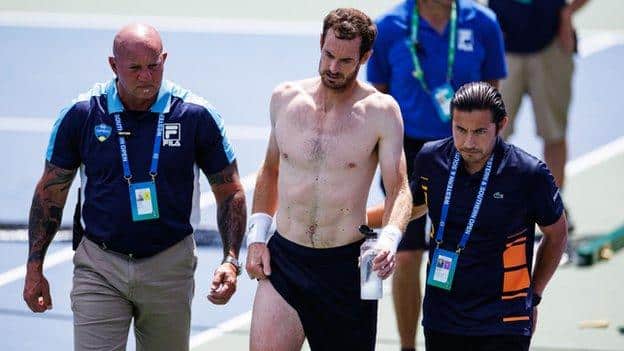 Andy Murray says he has undergone sweat testing in a bid to resolve cramping issues he has faced during recent matches.

The former World No 1 suffered with the problem during a recent defeat to fellow countryman Cameron Norrie in their North American hard court swing in Cincinnati, where Murray had to be helped off of the court.

Good match between Andy Murray and Cam Norrie with the latter just edging it. Murray in a lot of pain with cramp. Needing treatment just get off court. He's still a warrior though.

Ahead of the US Open, which starts this Monday, he says he’s looking for answers.

“I’m doing sweat testing in these conditions to see if anything has changed in that respect because the sports drinks and the electrolytes is made specifically on my sweat tests, but I haven’t done sweat testing for quite a number of years.

“I don’t know if anything has changed in that respect but we’ll try and get to the bottom of it, because let’s say if it was purely from hydration, then obviously after I got cramp like in Washington I made sure that I was not dehydrated going into the next matches. And if it was eating related then I made sure all of those boxes were ticked.

“It’s not just been as simple as changing how much I’ve been drinking or what I’m drinking so I need to get some answers.”

Murray famously won the US Open in 2012, and 10 years on, he’s set to get his campaign underway in New York against Argentine 24th seed Francisco Cerundolo.

He understands that the issue likely won’t be resolved in the next few days, but he hopes that over the coming weeks it will get better.

“If it’s conditioning related, I’m not going to get fitter in the next few days.

“But if there is something else there that I could potentially change, whether it’s eating or drinking or illness or something, then there’s the possibility that could change pretty quickly.”

Other than these issues, preparation seems to have gone well for the World No 49.

Brutal practice in the heat with @andy_murray 🙌🏽#Training #Usopen pic.twitter.com/BhOKMuTgyX