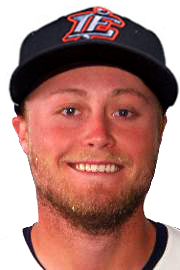 The Angels desperately need some more left-handed bats in their lineup. And they can always use another table-setter hitting in front of Trout. Luckily, they have a player who fits that bill exactly–outfielder Brennon Lund.

Drafted in the 11th round of the June, 2016 draft out of Brigham Young University, Brennon has shown a remarkable consistency in his hitting in his first two seasons of professional baseball. In 2016, he slashed .307/.360/.406 combined in Orem and Burlington. And, in 2017, he has posted a combined .307/.385/.430 in Burlington and Inland Empire so far. He brings good speed on the bases with a lot of grit to get the most out of the top of the order.

We recently caught up with Brennon to find out about what he’s been working on as a player and how his season has been progressing.

Click here to learn more about this rising prospect in the Angels system.