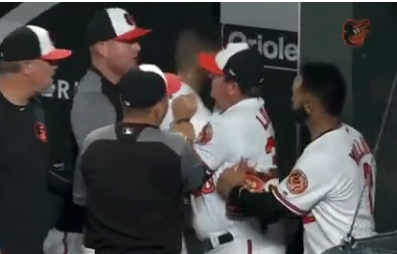 The Baltimore Orioles are an absolute dumpster fire, and just when everyone thought the state of the team couldn’t get any worse — on Wednesday, it did.

It happened during the team’s game against the Yankees, when New York set a record for most home runs hit against one individual team in a single season, which is a pretty brutal accolade to have on your resume. The most overpaid player in baseball, Chris Davis, who is making over $21 million this season, yet is hitting only .182, was not happy when Orioles manager Brandon Hyde said something that he didn’t like. Davis responded by going after him, and having to be restrained by teammates.

Here's what the MASN cameras caught of the Chris Davis-Brandon Hyde interaction:

Appears Hyde said something Davis didn't appreciate, then Davis had to be held back by hitting coach Don Long and Mark Trumbo. pic.twitter.com/4GTaePor2Y

Yikes, this season has felt like an eternity for the Orioles and their fans.