The Montreal Canadiens, the 24th best team in a 24 team tournament, a team that wasn’t even going to make the postseason had a global pandemic not shutdown sports for 4 and a half months, just eliminated the Pittsburgh Penguins in a best-of-5 series.

Every single word of that sentence is a goddamn circus ride, epitomizing this year, series, and tournament for the Penguins, NHL, and world at large.

And yet, it didn’t ever have to be this way.

Then they decided to not bother showing up for the single biggest game of the season with the whole season on the line.

From top to bottom, everyone is culpable.

Jim Rutherford atoned for some of his previous sins, but still kept the likes of Jack Johnson and Justin Schultz on the roster.

Mike Sullivan kept the team afloat when the injuries piled up and should have been nominated for the Jack Adams, then made just 2 lineup changes to a team that blew a 3-1 lead in Game 3.

He sent the 4th line over the boards down a goal with 2 minutes left in an elimination game.

He played Jack Johnson more than Marcus Pettersson in an elimination game.

All after both Johnson and Schultz were unmitigated disasters in Game 3: 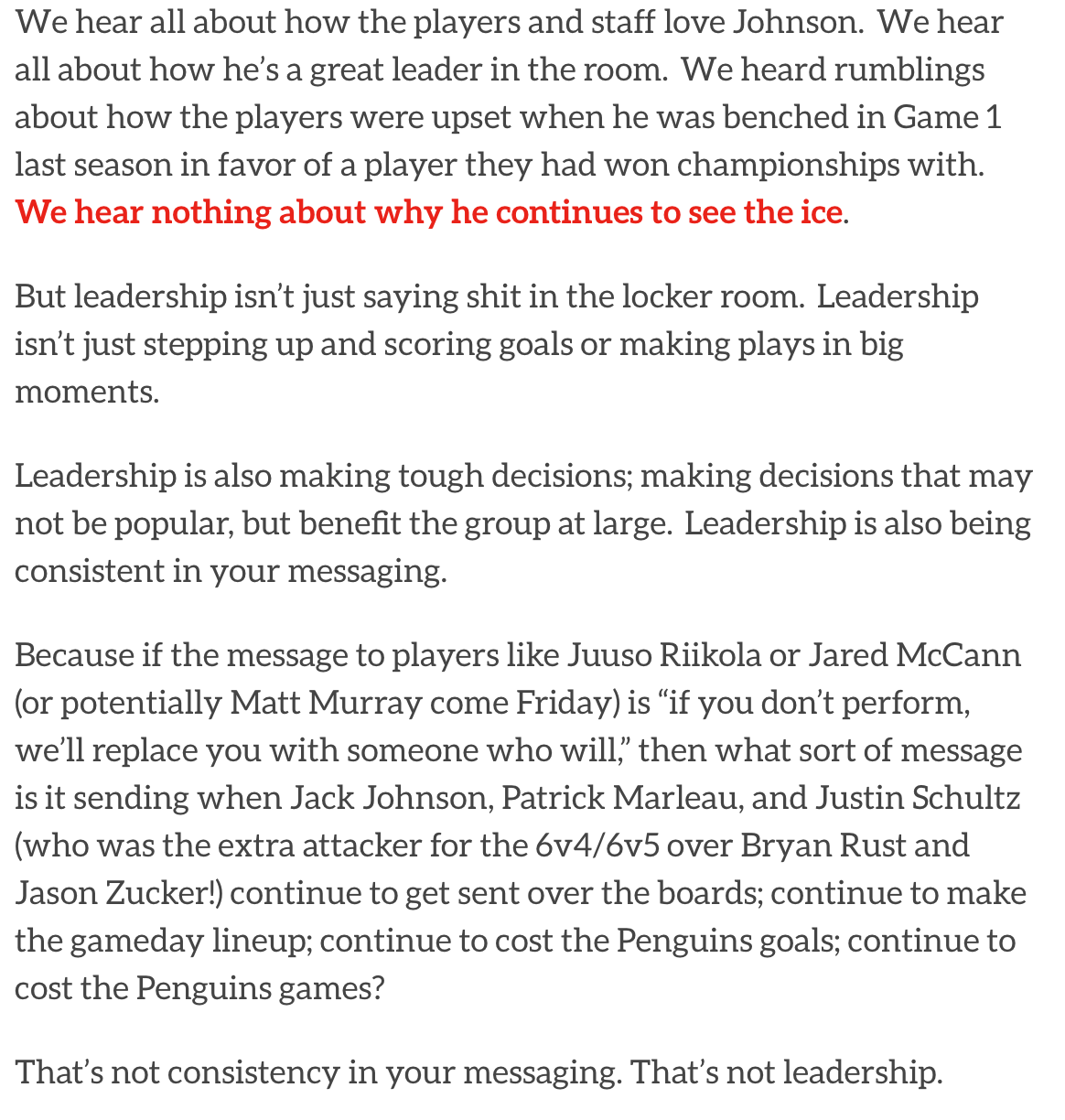 Sidney Crosby (2G-1A) and Evgeni Malkin (1A) combined for 4 points in 4 games.  Scoring goals is harder than hell to do in the NHL and players can’t control what does and doesn’t get saved, but even still, that stat line was never going to be good enough against any team, let alone a Carey Price backed team.

Jared McCann had his worst 3 game stretch as a Penguin.

Patrick Marleau was on the team, seeing ice time for some reason.

Matt Murray, who had a brilliant Game 2 win, concluded a rough season with a rough goal against.  It may prove to be his final one as a Penguin.

And further down the line at the bottom of the barrel, Jack Johnson and Justin Schultz continued to be complete and total liabilities defensively for the second year running.  We know at least one of them, Schultz, won’t be on this roster come the 2020-21 season.

Johnson still has 3 years left to run on his deal.

And if you want to know what the biggest problem area was through the first three games, look no further than those two.  They were that bad.  But they were exactly what we’ve known them to be.

After 4 games that probably shouldn’t have been played in the first place, it’s hard to really know what to make out of a lot of this.  But make no mistake, the last 4 games are going to cause some heads to roll this offseason.  Some are going to be justified (Johnson).  Others may not.

Sullivan’s probably shouldn’t be one of them, but one win in his last 8 playoff games isn’t a good look.  He’s still a great coach, but at a pivotal moment where he was the one that needed to come up with answers, he had none.

The moment of brilliance we were waiting for from Crosby or Malkin never game, either.

From top to bottom, everyone is culpable.

Maybe on Monday, this will all be forgiven. But don’t hold your breath on a 12.5% chance on anything.