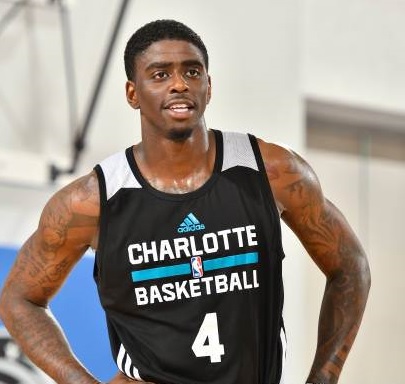 I’m sure that Dwayne Bacon has heard every possible play on his last name that could ever be imagined.  I had to throw up an article title like that just because people will take notice and be curious about it.  The truth of the matter is that I think we should all be happy that we were able to draft Dwayne Bacon with the 40th pick.  He brings so much to the table with his size, strength, and ability that we could possibly say that we found a diamond in the 2nd round.  That’s always the hope when you get to that part of the draft.

So who is Dwayne Lee Bacon Jr.?  He’s a 21 year old basketball player that was born and raised in Florida.  I find it unique and special that he was born and raised in Florida, played basketball in Florida, and even after offers from schools such as Oklahoma State, Georgia Tech, and Auburn, he chose to stay in his home state of Florida and play for the Florida State Seminoles.  Perhaps he’s a homebody.  Perhaps he just really loves Florida.  Whatever the case, the young man has a good head on his shoulders and he knows what he wants.  Another instance of this was when he was thinking of going into the NBA Draft in 2016, but he decided to withdraw and stay one more year at Florida State.  I appreciate this move because I am a big fan of players taking 2 years of college basketball before making the leap to the NBA.  That extra year improved his efficiency on the floor while showcasing his offensive abilities at either wing spot.  Standing 6’7” tall and weighing 220lbs will allow Bacon to play either the 2 or 3 spot at the NBA level.  I could easily see him adding some muscle to his frame to be around MKG’s size (6’7” & 232lbs).  Much like MKG’s 7’ wingspan, Dwayne Bacon’s 6’10” wingspan will allow him to help the Hornets at the small forward spot without giving up much in terms of size.

I honestly do not know how the Hornets will plan to use Dwayne Bacon.  I have always studied our depth chart to try and see what our team needed.  This is what I’m seeing right now (and this is where I would put them in the depth chart, not necessarily where the Hornets will put them):

Now as I see it, there are some options that we can go with.  I believe that Malik Monk can play some at the point guard spot.  I believe Frank Kaminsky could play some at center.  I believe Dwayne Bacon could play at the shooting guard spot.  Michael Carter-Williams could play some at shooting guard.  Basically, with the 14 players we currently have, we have a good bit of interchangeable parts, which puts us in a great position.  Having a roster of “long” players creates this.  I see a team with lots of young depth, but with veteran presence that can quickly shape the rest of the roster into a very competitive group.

The one issue I always have when I write out a depth chart is that I feel bad when I place that player as the 3rd person in the depth.  In years past with the Hornets/Bobcats, I didn’t feel so bad because we really didn’t have much talent on the team, and the depth…well it was what it was.  This season, however, I’m looking at a current roster of 14, and I see true depth.  Technically we won’t know more until after Media Day (that I hope I get to attend this season), training camp, and the preseason gets going.  On paper, however, this is the most confident I’ve felt about this team in terms of skill of our depth at every position, in probably forever.   The proof is in the pudding for sure.  I could see the team remaining at 14 players for sure.  Having that open spot allows us to be able to add players, should we need to fill a need due to injury.  Perhaps the organization decides to go another route than Weber, and they let him go to get a vet presence at point guard.  Perhaps we use what little space we have left to get a person on the team to give us that 3rd center.

Like I said, time will tell.  Right now, we can only hurry up and wait.

Dwayne Bacon, welcome to the Hornets family.  I wish you a bright future here in Charlotte!