When it comes to John Calipari, we have all seen the documentaries, read the articles, listened to the early morning ESPN rants. Say what you want about the man, but he is undoubtedly the best recruiter to ever do it. But in the words of my favorite meme: “Y tho?�? Calipari gets it. He knows that these high school studs have had shady characters whispering hoop dreams into their ears ever since 9th grade. So, why not embrace the one-and-done mentality. Coach Cal did/does just this, and it has resulted in some of the most heralded recruiting classes in history.

I. The Sales Pitch

Spend one year at UK, then go to the NBA.

The numbers tell a tricky tale. I looked at every college-player-turned-pro that Calipari has brought in since his tenure at Kentucky began. All in all, 32 of his players have played in the NBA since Cal convinced them to become a Wildcat. For what it’s worth, these guys were top recruits. 20 of these 32 recruits were listed in the top ten for their class, according to ESPN’s rankings. Furthermore, 10 of the 32 were in the top five! So, how did their NBA careers pan out?

The classes from 2010 to 2017 churned out exactly 4 All-Stars (Wall, Boogie, KAT, AD). Devin Booker and Jamal Murray look primed for future bids, while it is still too early to make a call on guys like Fox, Randle, Monk and Bam. Perhaps more importantly, let’s figure out how many of these players are busts. Personally, I believe bust to be a subjective term but, one that is relative to draft position. For example, Kidd-Gilchrist is a bust. He was drafted second overall and it’s time to call a spade a spade. He has career averages of 9, 6 and 1, while shooting 47% from the field and hitting literally 0.1 threes per game. He isn’t the defensive menace people expected him to be either. Is this what Charlotte thought they were getting when they drafted him second, after Anthony Davis?

How many other busts are there and who are they? I counted six. In order of draft class, they are, Orton, Knight, MKG, Teague, Goodwin and Young. Plain and simple, these guys either busted their way out of the league or, have massively underproduced. In other words, if redrafts were happening for each respective class only 1 of these players (MKG) would be taken in the top 20!

What about names like Bledsoe and Randle? I broke this list down into people who are not All-Stars (yet), but still NBA caliber players. They are the two aforementioned players as well as Kanter, Noel, Lyles, Booker, Murray, Skal, Fox, Monk and Bam. Notice that these hoopers all declared when they were freshman…

So what do we make of this list? Things clear up when observing what year of college these players were in when they were drafted. Every single All-Star left as a freshman. Intriguingly enough, every player I labeled a “bust�? also left after their freshman campaign. Is there a reason for this? In back-to-back-to-back years, John Wall, Brandon Knight and Marquis Teague were all brought into UK. They were each an ESPN top 10 recruit and with the exception of Knight, the top point guard in their class (Knight was second only to that Irving guy). Do you think that Brandon Knight commits to UK if he believes John Wall is sticking around another year? Me neither. But here’s another question. Do you think Knight would have returned for his sophomore year if Teague had never committed to UK? There is some element of pressure for these top recruits to turn pro after one year because, like it or not, some other NBA-worthy stud is coming for your spot next year.

Don’t believe me? Then let’s look at the stretch of centers who ran through Kentucky from 2010 to 2017.

Good luck finding playing time if you stick around an extra year. 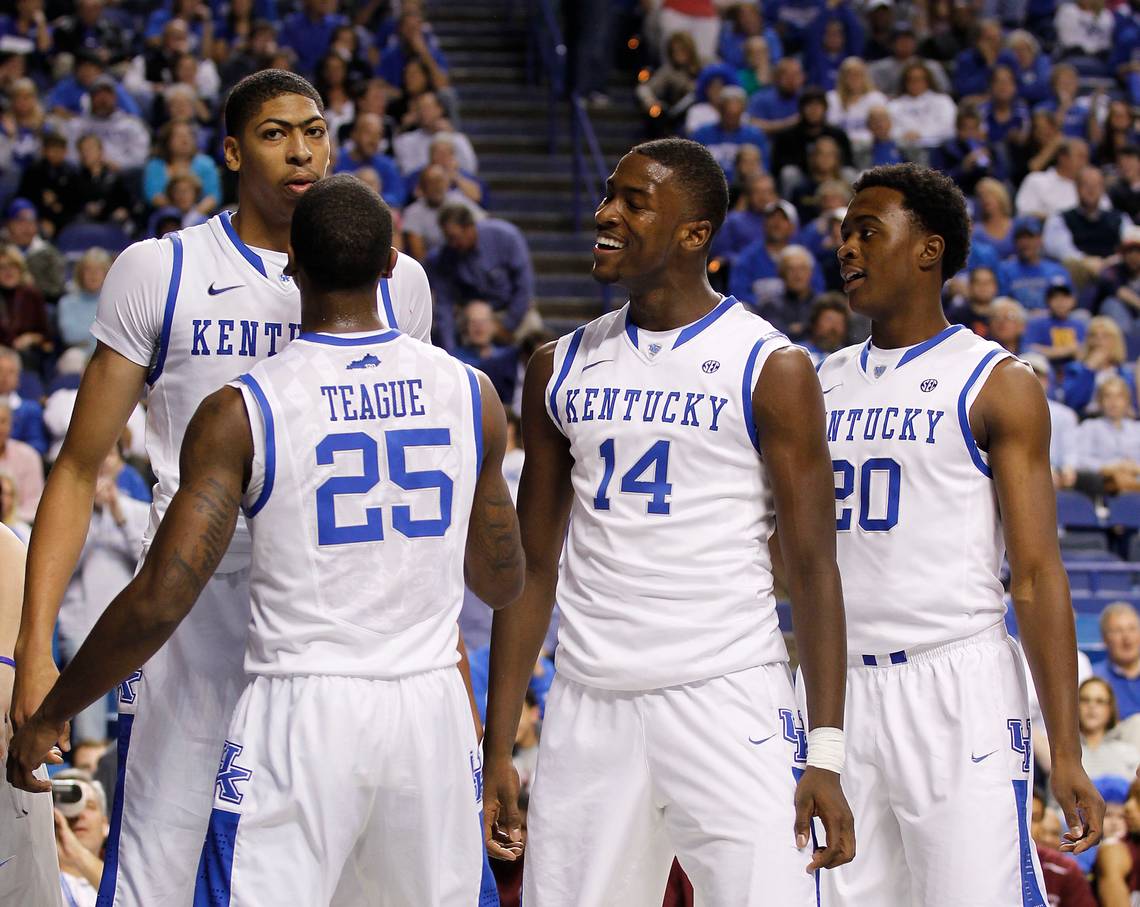 Out of every center on that list, Cauley-Stein is the only one who stayed multiple years at UK and has experienced NBA success. Johnson stayed a few years and has played a total of 30 games in the NBA, all coming this year. Humphries hasn’t even sniffed the league. Look at some guys who may have felt pressured to leave prematurely. Orton may have heard the hype from Enes Kanter (who ironically did not play at UK) and decided to turn pro. Noel would have had to compete with both WCS and Johnson for minutes. Skal knew that Bam was coming to town. Conversely, Bam surely was aware that Richards, as well as other talented frontcourt players, would soon be wearing Wildcat blue.

Finally, let’s look at everyone UK player that has declared for the NBA draft. This time, however, we will look through a special lens and only look at players who were non-freshman when they left. The list:

Only two of these players are seeing meaningful minutes in today’s game (Ulis and WCS.) Sure, Andrew Harrison has started games for the Grizzlies this year; however, let’s not kid ourselves. The only players who currently deserve time in the Association are Ulis and Cauley-Stein. Jones flamed out, while Lamb, Johnson, Poythress, Briscoe, Humphries and the Harrison brothers are “cup of coffee�? guys at best.

Simply put, if you want to make it in the NBA, do not stay at Kentucky past one year. But, if you are going to leave as a freshman, you better be damn good. It’s no coincidence that all 6 busts left after only a single year. Piece of advice; don’t commit to Kentucky if you are not sure you will be ready for the NBA after a single season. After all, 13 out of the 32 Calipari/Kentucky players who have declared for the draft are currently fighting for the NBA careers. That’s a 40% bust rate folks. Beware.

Founder/Writer for Theplaygrounder.com and contributor to Red’s Army Twitter: @Mattesposito_
View All Posts By Matt Esposito

Founder/Writer for Theplaygrounder.com and contributor to Red’s Army Twitter: @Mattesposito_
View All Posts By Matt Esposito