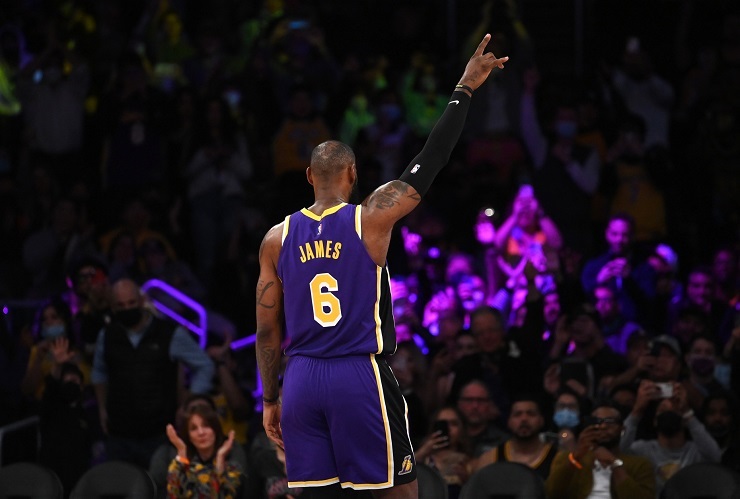 The regular season is winding down and the NBA Playoffs are right around the corner. While a couple of tanking franchises have already thrown in the towel, there are still a few NBA teams making bettors a lot of money down the stretch. With a handful of NBA contests on the schedule on Tuesday, sharp bettors will be cashing in and placing bets on the NBA games tonight. Below, we’ll break down our staff’s best NBA bets and expert picks on the NBA games today.

There are five NBA games tonight, which means sharp bettors have plenty of opportunities to cash in at the top online sportsbooks.

Below, you’ll find a quick summary of our expert picks for the NBA games tonight:

*all NBA odds taken from BetOnline

For a complete breakdown of our expert NBA picks, check out our staff’s best bets for the NBA games today, March 29, 2022.

To view the latest Lakers vs Mavericks odds, check out the NBA odds from BetOnline below.

The Lakers have won just three of their previous 11 games and are suddenly in jeopardy of missing out on the NBA Play-In Tournament. Los Angeles currently sits just a half-game ahead of the San Antonio Spurs for the 10th and final spot in the Western Conference Playoffs. With LeBron James and Anthony Davis listed as doubtful for this game, most bettors are ready to write off the Lakers in this spot. Per dunksandthrees.com, Dallas comes in ranked as the sixth-best defensive team in the NBA.

The Lakers will be in desperation mode without James and Davis in the lineup. However, without James and Davis clogging up the middle, guard Russell Westbrook should be able to facilitate the offense and get back to playing his style of basketball. This should open up the Lakers’ spacing on offense, giving Westbrook the ability to spread the ball around to some of the Lakers’ outside shooters. There’s some value with the spread, but I’d rather make the gutsy pick here and take the Lakers to win on the moneyline.

Take Los Angeles (+575) to win this game in Dallas on Thursday night.

For a breakdown of the Bucks vs 76ers odds, check out of the NBA lines from BetOnline.

I’m going all-in on the Milwaukee Bucks in this game for one simple reason.

In his career, Giannis Antetokounmpo has a 21-6 record against the Philadelphia 76ers. I don’t expect that trend to change on Tuesday, and despite losing to Philadelphia in their last meeting, I believe Milwaukee will comeback and win the season series against the Sixers.

With that being said, I’ll take the extra point here. Take Milwaukee to cover +1 (-107) on Tuesday evening.

Check out the Mavericks vs Lakers odds from BetOnline, one of the best NBA betting sites.

I like the safe bet of Dallas -12.5 tonight. Luka is averaging about 22.7 points and 7 assists in 11 games vs the Lakers. Not to mention, the Lakers have been dysfunctional all year long and LeBron has been the only consistent star for them. AD is still on the injury report and the team seems to have lost a ton of morale during its late-season “playoff push”. On top of this, Dallas is making a late push for home court advantage in the playoffs.

Take the Mavericks to cover the spread at home in this game against the Lakers.

For the latest Pistons vs Nets odds, check out the Isaiah Stewart player props odds from BetOnline below.

For one of the best NBA bets for tonight’s games, we’ll head over to the Pistons vs Nets game.

Isaiah Stewart has been finishing the season strong in Detroit. The big man earned a reputation as one of the NBA’s toughest competitors after getting into an altercation with LeBron James earlier this season but it looks like he’s starting to become comfortable in his role with the Pistons.

The Pistons will also be in a pace-up spot here against Brooklyn, which bodes well for Stewart’s chances of having a big game. Beef Stew has collected double-digit rebounds in 14 of his last 23 games, which gives him a pretty good chance of eclipsing 20+ points, rebounds, and assists in this game. He’s also scored double-digit points in back-to-back contests.

Take Isaiah Stewart to go over 20 points, rebounds, and assists on Tuesday evening.

The best offshore sportsbooks make it easy to sign up and bet on the NBA. New users can register for an account and get free bets on the NBA games today on their first deposit.

Below, we’ll go over the best NBA betting sites and the free bets available for the NBA games tonight.