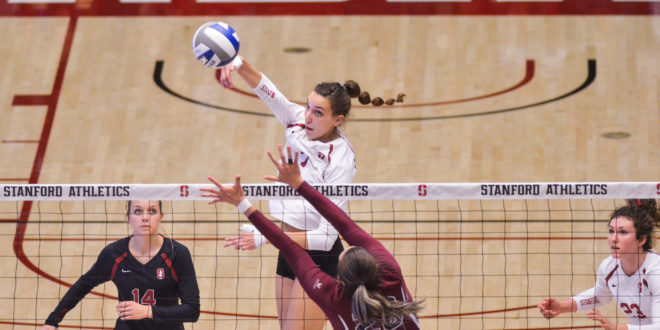 It’s time for some “Quicks & Bics” or a way to deliver some important volleyball items rapidly, or as the names imply, “quickly.” A quick set, also known as a ”Quick” or a “51” or a “one”, is an extremely fast-paced set 1’ to 2 ‘ above and near the net, where the hitter is approaching the setter and is usually in the air before the setter delivers the ball. A “BIC” or back row quick, is a low set in the middle of the court near the ten foot line delivered to a back row player to execute as an offensive attack. The BIC is similar to a “pipe” but is set lower and faster than the pipe to add more surprise to the attack. A quick is usually executed by a middle hitter, but a BIC is often executed by the backrow opposite or a backrow outside hitter. The Bic and the Quick both require exact timing and coordination between setter and hitter and both are deadly offensive weapons.

Before we move on to our devastating up tempo offense, though, here’s a PSA for all volleyball.

Dates and sites for all four Women’s National Volleyball Championships.

Check the NAIA website for more details on the NAIA tournament.

Check the NCAA for more details on all three NCAA tournaments.

Now, back to our devastating offense and the “BICS and Quicks.” Also, please remember that all ranks referenced in this blog refer to the Net Set Ranks, or NSR for short. The Net Set Ranks offer both the mathematical concepts of probability and statistics and the human perspective of the coach’s view by combining the results of numerous polls and rankings into a single number, or index.

Oregon’s Ducks dominated the Washington Huskies in Seattle with a convincing 3-0 (25-21, 25-8, 25-22) road victory. With the victory, Oregon enters into a four-way tie with Washington, UCLA, and Stanford for first place in the Pac-12. As the standings below show, things are still “topsy-turvy” in the Pac-12.

Kansas and Texas continue to roll in the Big 12 as the season winds down to a conclusion. Kansas has played one more conference match than Texas and therefore holds a statistical advantage over the Longhorns, but the two schools are virtually in a dead heat for the top of the Big 12.

I was thoroughly shocked last week when I discovered that Oklahoma State University (OSU), a very large public university (21,046 undergraduate students according to US News & World Report) located in Stillwater, Oklahoma, does not sponsor women’s intercollegiate volleyball. What’s up with that? Well, that’s another week of volleyball. Hope you enjoyed some of it. But, don’t despair, more great volleyball is ahead of us. Check out tomorrow’s post because there will be changes in the women’s college volleyball world!