Bill Belichick Is Great, But Vince Lombardi Remains the Best 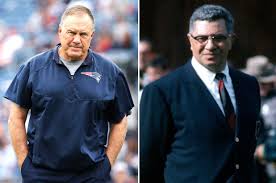 When the New England Patriots won Super Bowl LIII on Sunday, it gave head coach Bill Belichick his sixth Super Bowl title. Based on the overwhelming success the Patriots have had since Belichick became their head coach in 2000, many people have declared the Patriots head coach the greatest of all-time. His top competitor is former Packers and Redskins head coach Vince Lombardi, the man the NFL’s championship trophy is named after. While Belichick is an all-time great, Lombardi remains the GOAT.

Lombardi was the head coach of the Packers for nine years from 1959-1967 and then coached the Redskins in 1969. He died of cancer just prior to the start of the 1970 season.

During his time in Green Bay, Lombardi won five NFL championships including the first two Super Bowls. He never had a losing season. His record in Green Bay was an impressive 89-29-4 during the regular season for a .754 winning percentage. His best season came in 1962 when the Packers finished 13-1-0 and outscored opponents by a 415-148 margin, an average score of 30-11.

Lombardi took over a Packers team that had a 1-10-1 record in 1958 and in his first season, turned them into a winning team with a 7-5-0 record. In his second season, Lombardi led the Packers to the NFL title game for the first time in 16 years. The Packers lost to the Eagles, falling roughly eight yards short of the winning score as time expired. But Lombardi would never lose another playoff game, winning his final nine for a career playoff winning percentage of .900.

Lombardi’s offense was not overly complex. He didn’t fool his opponents, he simply made sure his team was better prepared and outexecuted the other team. Opposing teams knew what plays were coming, but they still couldn’t stop them.

Former Raiders coach John Madden remembered attending a coaching clinic where Lombardi was the speaker. During the entire eight-hour presentation, Lombardi discussed just one play, the most famous play in his offense: the power sweep. “I went in there cocky thinking I knew everything there was to know about football, and he spent eight hours talking about this one play,” Madden said. “He talked for four hours, took a break, and came back and talked four more. I realized then that I actually knew nothing about football.”

Bart Starr remembered Lombardi telling his team early on, “We are going to relentlessly chase perfection because, in the process, we’ll catch excellence.”

The Brooklyn native certainly caught excellence during his tenure in Green Bay. Lombardi’s Packers won NFL titles in 1961 and 1962 and after second-place finishes in 1963 and 1964, his team accomplished something that had never been done before and hasn’t been done since: The Packers won three straight NFL titles including the first two Super Bowls.

Lombardi’s 1967 team was old and ravaged by injuries. They had to overcome difficult odds and a much younger and talented Cowboys team to win their third straight championship. The game became known as “The Ice Bowl” and the temperature at kickoff was minus-13 degrees. Bart Starr led the Packers on a 68-yard drive in the final seconds that ended with a quarterback sneak with just 13 seconds left on the clock.

“That drive was what Vince and his players were all about,” said running back Donny Anderson. “We never had a thought about losing the game. He had taught us how to be extraordinary when the chips were down.”

After winning his third straight title, Lombardi retired as coach and spent one year as the Packers GM. He then coached the Redskins and led them to their first winning season in 14 years in his final season as coach.

The Super Bowl trophy was named in his honor shortly after his death in 1970.

Belichick got his first opportunity to be an NFL head coach in 1991 when he was hired by the Cleveland Browns. In five seasons in Cleveland, Brown had four losing seasons but led the team to the playoffs in 1994. He took over as coach of the New England Patriots in 2000 and after suffering a 5-11-0 mark in his first year as coach, led the Patriots to nine Super Bowls, winning six.

Belichick’s overall regular season record as a head coach is 261-123 for a winning percentage of .680. His best season came in 2007 when the Patriots went 16-0 during the regular season, although they lost to the New York Giants that season in the Super Bowl.

In the postseason, Belichick has a 31-11 record for a winning percentage of .738. This is a far cry from Lombardi’s .900 mark, although the Patriots head man appeared in 32 more playoff games than Lombardi. Belichick now has won six NFL titles compared to five for Lombardi.

Belichick is known for his impressive defensive strategies. Giving him two weeks to prepare for an opponent usually means trouble as the Rams found out in Super Bowl LIII. As a defensive coordinator, his New York Giants teams were able to shut down a far superior Bills offense in Super Bowl XXV to help the Giants pull off a shocking upset.

There are a few factors working in Belichick’s favor. His success has come over a much longer time than Lombardi’s. Belichick has sustained excellence in New England over 19 seasons, more than double Lombardi’s tenure in Green Bay. He also had to contend with a lot more roster turnover due to the salary cap and free agency. In the modern NFL, there are 32 teams in the league while Lombardi never had to overcome more than 25 teams combined in the NFL and AFL.

But Lombardi’s excellence was unparalleled. His regular season and playoff winning percentage are both better than Belichick’s. Mr. Lombardi never had a losing season, Belichick has suffered through five. Lombardi won three straight championships, something that has never been done before (in the playoff era) or since. Also, Lombardi has never been tainted by scandals like “Spygate” and “Deflategate” which have created controversy around Belichick.

Five championships in seven years and three in a row is a record of excellence that has never been matched. While Bill Belichick’s record is extremely impressive and he is the greatest coach of the modern era by far, he has yet to overtake Lombardi for the title of the greatest of all time.