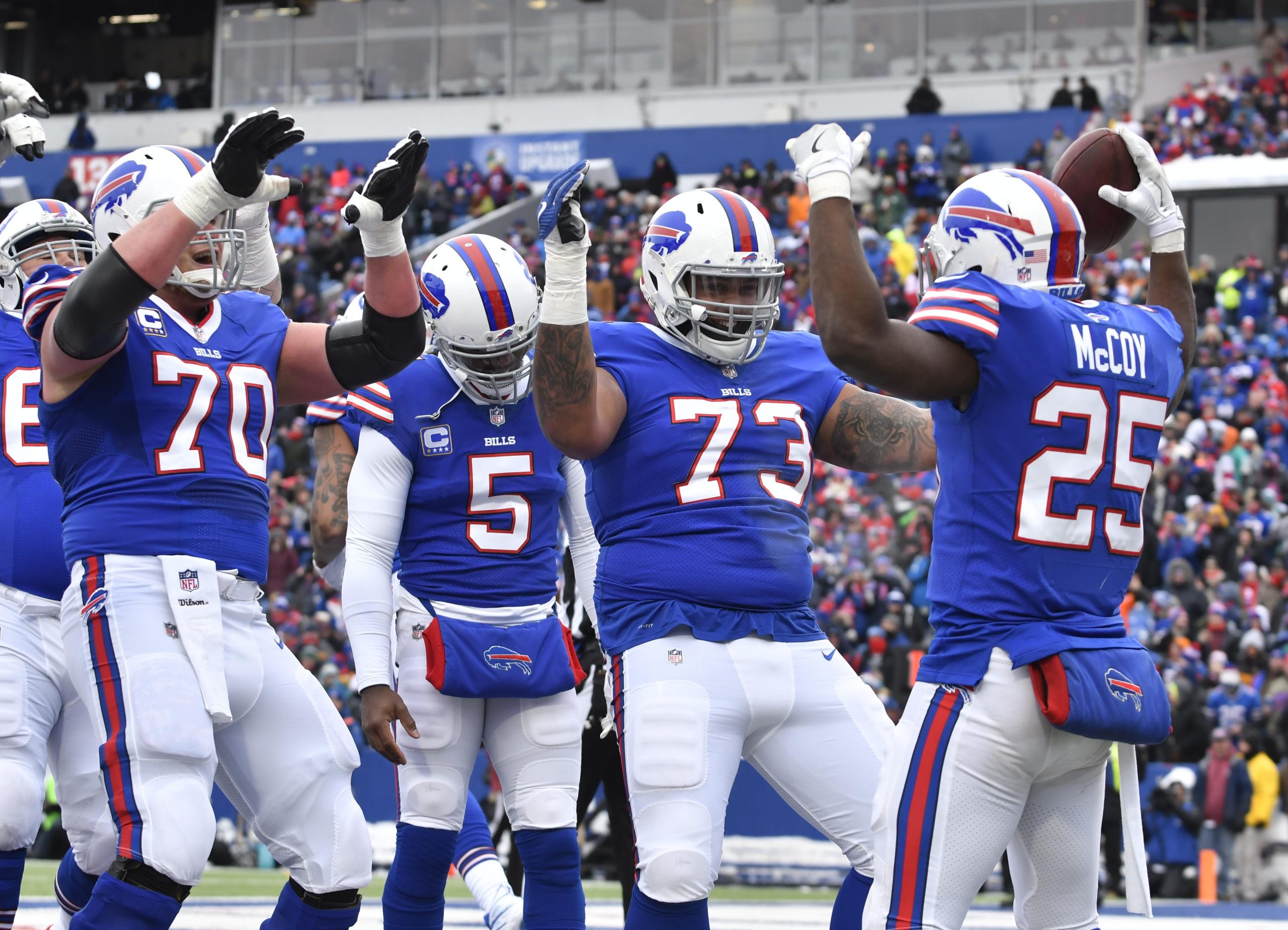 In a few scant hours, for the first time in 17 years the Buffalo Bills will be playing a playoff game. For all of us on staff – and all of you reading – that means a lot. This prediction piece is both unexpected and a delight.

Like the money poured into charities earlier this week for Andy Dalton and Tyler Boyd, so have the Bills fan base descended upon Jacksonville, filled with hope, alcohol and at ease. At this point, the team is playing with house money. They could lose in spectacular fashion and they’re a normal team again – not just the moribund standard bearer of sad sports.

Personally, given their opponent I am not one prone to think “woe is me – they’re going to lose”. Jax’s defense is outstanding, but their quarterback plays the way some claim Tyrod Taylor does. At his best, Taylor is a key piece of a complimentary football team. Other than Jason on “The Good Place” I can’t find too many people that can depend wholeheartedly on Blake Bortles.  More than anything on offense I am worried about the Jags run game – and the Bills’ inability to stop the run going into the end of the season.

Despite all this, I think the Bills will win, 19-10, because Doug Marrone likes to punt more than Troops and people are who they are in the unforgiving minute. Watching the Chiefs vs. the Titans only re-doubled my thoughts on the game – if you can’t watch Wild Card weekend without even a little hope after getting that monkey off their back, I don’t know what to tell you.

But enough of my sillines, let’s hear from the rest of the staff! Enjoy the Game!

Today we submit our game predictions to you in a whole new world, a world where the Buffalo Bills are in the playoffs. The entire mindset and identity of the franchise and fanbase changed in nine seconds of real time as Andy Dalton fired to Tyler Boyd, who turned around and found nothing but opening space between him and the west end zone in Baltimore. Everything changed in an instant.

17 years without a playoff appearance? Gone

The sinking feeling that something will always go wrong for the Bills? Don’t worry about that showing up.

The longest playoff drought in North American professional sports? Not us anymore.

The Buffalo Bills and their fans went from misery to jubilation in one moment. And now, they are going to the playoffs.

They are going to Jacksonville, to be precise, and it’s probably the best draw this Bills team could have possible hoped for. So let’s be real about this Bills team: it’s not a great team. It might not even be a good team. They have one of the worst ranked offenses in football and they have a middling defense, statistically. The Bills found their way to 9-7 because of an insanely good turnover margin and a lot of luck that fell their way. The Tre White touchdown in Atlanta. Adam Humphries’ fumble at the end of the Tampa game. Kansas City being in a total funk when the Bills went there in November. The many things that went their way in the Indianapolis game. The tiebreaker situation in the AFC. The Dalton-Boyd play.

I have a hard time seeing the Bills beating any team in the playoffs, especially with an injured LeSean McCoy. Tyrod has done all he can to carry this offense, but he can only do so much with what he has to work with. With all that said, Jacksonville really struggled in the final two weeks of the season. They don’t have any wide receivers you can trust to step up and make a play. Fournette is still a bit banged up. Their quarterback is Blake Bortles.

The Jaguars are an incredibly beatable team that can be had for the taking. I just don’t know if this Bills team can take them. It comes down to the defense stepping up again and coming away with a number of takeaways. You really can’t count on that happening, but the Bills have done it before. I just wouldn’t want to bet on it again. Speaking of betting, Vegas has set the line for this game as Jags -9, so there’s really not a lot of optimism there that the Bills can win this game.

But who had the Bills here in this spot? Who thought it would all work out for them in Week 17? Hell, who had them alive for Week 17 after the Chargers game? This team continues to stun us and take advantage of the opportunities they have in front of them. Don’t let this ride end yet. Give us a playoff win to snap yet another drought (no playoff wins since 1995). Give us a week to talk about the Patriots, a trip to Foxboro to see Brady, Belichick, and Gronk, and let us dream of pulling an upset for the ages.

So we did it. We fucking did it. I hadn’t been too hyped up on the Bills, but, I decided to stop being an asshole about the NFL and stop bagging on other people for having fun. I’m sorry if I’ve offended you in the past with my stances.

I haven’t really kept up on Tecmo because I’ve too busy noob tubing Nazis on CoD (there are no noob tubes). I’ll have screenshots.

Anyways, all the Tyrod haters, fuck you, go watch Young Sheldon. He’s serviceable quarterback. If the football thing doesn’t work out, he can make plenty modeling, I mean have you SEEN his wardrobe? To all those saying, uh it’s better to tank than try for the 6th spot, go fuck yourselves. To those saying the Bills are gonna get blown out: we seriously don’t care. If the Bills lose 69-0, I will still have a smile on my face at 4:20 PM on Sunday. The unbridled joy of the fanbase was something quite to behold. Dalton’s charity getting hundreds of thousands from the Bills fanbase. It’s amazing.

Apologies for missing last week gang; I did think the Bills would win, but never in my wildest dreams imagined they would get the help they needed. Remember when they made the Peterman decision and some folks were like “the Bills did this because they don’t want to just make the playoffs – they want to be better than that!”

Boy howdy that was stupid, and the joy of last weekend will linger on for quite some time. We might be the ‘worst team to make it to the playoffs’ but, frankly, who gives a shit. They’re in. Anyway, we’re very clearly dealing with a Team of Destiny here. Sure, the Bills are outmatched in very nearly every facet of this game, and have a negative point differential for the season, but I think the stupid dumb Bills capitalize on a couple of Jags turnovers, get a couple chunk plays from Tyrod, a banged-up LeSean, and cult hero Marcus Murphy, and somehow eke out a win. Bills 17 – Jaguars 14

Mike McKenzie (@mack10zie, 8-8 regular season, 0-0 Playoffs).  Like everyone, I was more excited than I thought possible when the Bills clinched a playoff spot.  I thought to myself, “Who cares if we even win a game, we are in”.  I’m afraid the team may feel this way.  Shady not being 100% scares me.  The Jags have a really good D.  While they haven’t played great the last 2 weeks, it appears the Jags are susceptible to the big play.

However, I don’t think the Bills are the type of team that can make many big plays.  I do trust Tyrod more than I trust Bortles.  If the Bills can make Bortles beat them, they have a chance.  I think the Jags will probably run the ball 60% of the time, and just let Bortles go on play-action, where he’s decent.  If, and I mean IF, the Bills can get a 10 point lead and force Bortles to beat them, I like the Bills chances, but I don’t think it will come down to that.  I think the Jags will just hand-off all day.  Jags 24 Bills 13

Wow… I can’t even believe I’m writing this prediction. It’s just amazing. Like I said in one of my first posts early this year, this was the season we were supposed to have fun either way. And man, are we having fun.

I’m so happy to finally end the fucking drought that I can’t even focus on analyzing the game. Last time we were on the playoffs, I was 12 years old vacationing in Mexico with my family. Now I’m near my 30s and I feel like a teenager with a major crush on a girl.

To be honest, as of right now, I don’t care about the outcome. I have decided to enjoy the shit out of the game. Of course, on Sunday, it’ll all change. I’ll be nervous and all I’ll care about is winning. But for now, I’m enjoying this week. I’m proud of this team and I don’t even care how we got in.

As for the game, I’m predicting the Bills to win because of two reasons: 1) Coach Troops will have the guys focused and prepared, and 2) I’m biased. I don’t want this feeling to end. I want to continue suffering in each game. I don’t want the season to end. Bills 17-Jags 16.

From Perú, far away from the broken tables in Jacksonville… Go Bills!