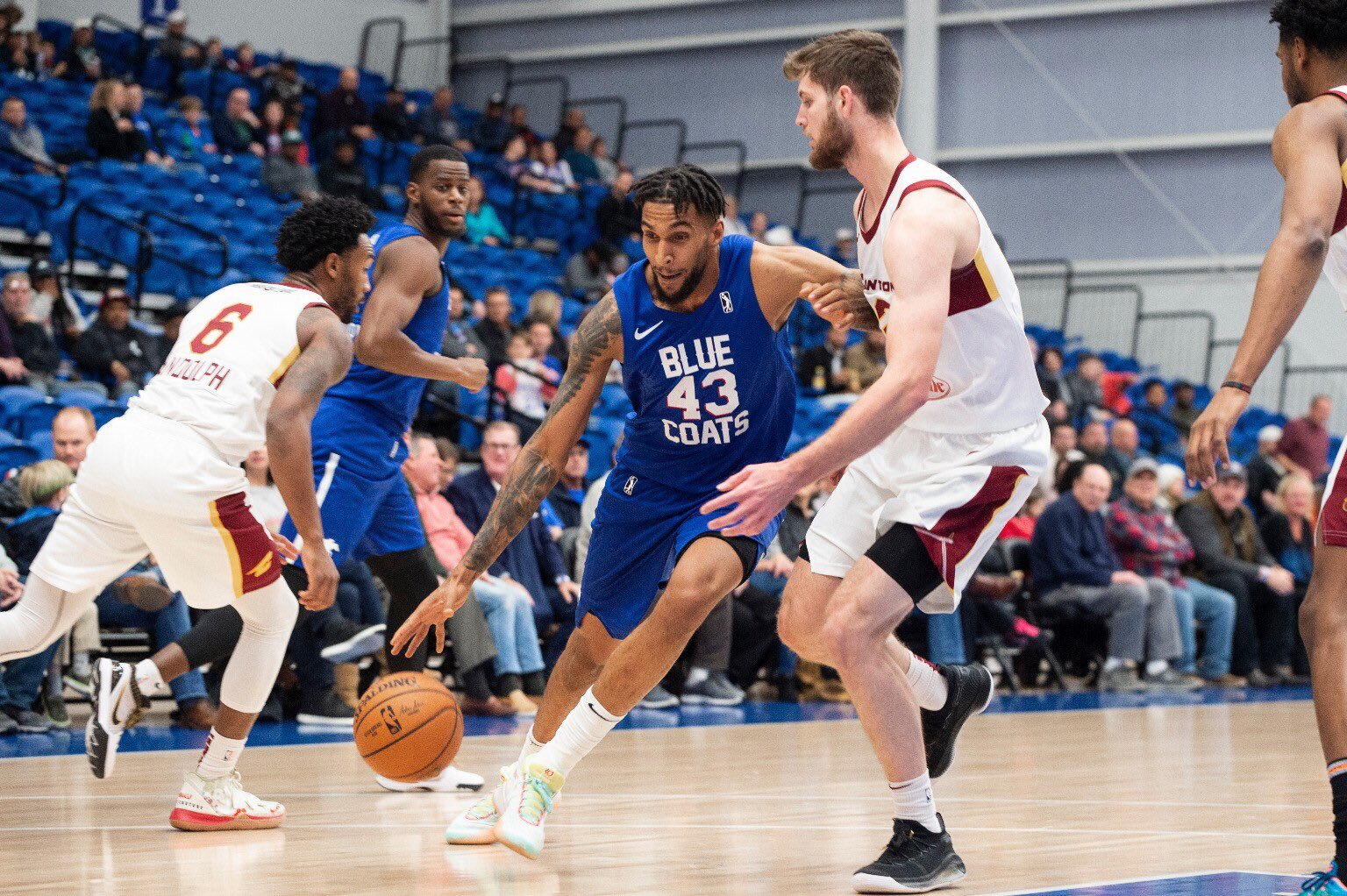 The Delaware Blue Coats split a back-to-back with a road victory on Friday night over the Long Island Nets and a loss on Saturday night at the 76ers Fieldhouse to the Canton Charge.

The Blue Coats defeated the Nets, 152-137, just four points shy of a franchise record in points. However, the offense was not as explosive as they lost 123-111 to Canton.

“In all aspects, we looked flat-footed. We didn’t have the same jump to our step that we needed,” Blue Coats head coach Connor Johnson said. “Part of it is that it’s the second night of a back-to-back with eight guys active.”

“Or something special where we show up every day and do it a little different. That’s what’s disappointing to us about this one,” Johnson said.

Before this weekend’s games, the Philadelphia 76ers assigned forward Jonah Bolden to the Blue Coats. Bolden was a second-round pick by the Sixers in the 2017 NBA draft.

As a rookie last year, he spent time with both the Sixers and Blue Coats.

“Jonah was great on Friday. At times, he was dominating the game in a lot of facets, including defensively, taking (Henry) Ellenson out of what they wanted to do. Offensively, he scored in a lot of ways and had a mature approach,” Johnson said before Saturday night’s game.

“He picked his points in a very good way, knowing when to put his imprint on the game. That helped our team tremendously and it’s been great watching him get acclimated with the rest of the team,” Johnson said.

Bolden excelled in his first weekend with the G-League squad, scoring 34 points on Friday against the Nets, converting on 12-of-18 attempts and pulling down nine rebounds. He continued his impressive play with a 16-point,16-rebound performance on Saturday.

Fellow two-way player Marial Shayok continued his dominance with a 29-point, 13-rebound performance on Friday night. Shayok was held out of Saturday night’s game for a day of rest, but the start to his rookie season has gone exceptionally well.

With Shayok resting, the Blue Coats received key contributions from two players who were a part of last season’s team in Jared Brownridge and Haywood Highsmith.

Brownridge and Highsmith’s experience in Delaware’s system has been evident, and both players have been called upon in a leadership role.

“Haywood thrives in the up and down pace that we want to play at. That’s made him better along with the improvements he’s made,” Johnson said.

“From where he was last year to this year is light-years. Now he’s an impressive player. He’s had incredible defensive possessions, he’s looked good and under control offensively.”

Last year’s first-round pick Zhaire Smith was forced to watch this weekend’s games from the sideline with right knee soreness. The team said that it’s only a precautionary measure.

The Blue Coats’ next game is on Tuesday, but the season is still in its early stages. Precautionary measures regarding an injury are another example of emphasis the Blue Coats and Sixers placed on player development in the G-League.

In addition to Shayok and Smith, the Blue Coats were without Christ Koumadje (ankle injury), Shizz Alston (recovering from a training camp injury), and Michael Bryson in game two of the weekend.

With that being said, Delaware only dressed eight active players on Saturday.

“It becomes a long list of guys that are out or doing something. So only having eight tonight in the second game of a back-to-back was tough, especially with the way we want to play,” Johnson said.

Therefore, with Norvel Pelle back with the Sixers and Koumadje out, Doral Moore saw extended reps at center. Moore played 12 minutes on Friday night compared to 30 on Saturday.

The former SMU big man capitalized on his extended minutes, scoring 16 points on 6-of-7 shots and grabbing nine rebounds.

Moore was acquired from the Memphis Hustle via trade during this season’s NBA G-League Draft. Moore was a big part of the Hustle last season and has become a valued member of the big man rotation in Delaware.

“Tonight was a good game for him. He’s improving every day and understanding what we want to do.”

“It becomes kind of a chess match between our team and the other team where if Moore does a good job they choose not to play their center. We have to make adjustments on how we can continue to use our size to our advantage,” Johnson said.

The Blue Coats (2-2) will have two days off before returning to the court on Tuesday at home against the Capital City Go-Go (2-1).