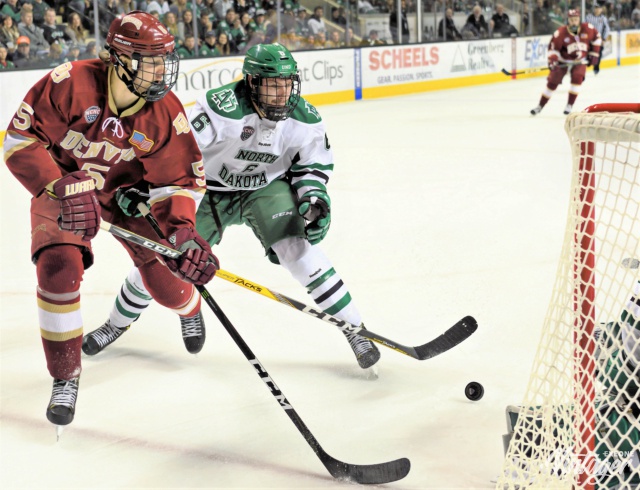 Two weekends ago, Air Force Academy head coach Frank Serratore sounded off on the NCHC officials after his team lost 6-0 to the Denver Pioneers. First, I do know that the NCHC conference head of officials was at the game the in question and according to Southpaw from Sioux Sports:

The game against AF falls solely on the shoulders of new NCHC ref Nathan Weiler. He called all but one of the penalties on AF. The conference is very aware and Don Adam apologized to Frank.

Personally, I trust Southpaw’s word, he does video work for the NCHC.  Southpaw is well connected and in the know. He also broke the story about the NCHC was moving the conference tourney back to the Xcel Energy Center. This was before the media had “officially” reported the story in question. But I digress, I don’t want to get off message here.

After the aforementioned press conference in question, I decided to dig deeper and take a look at the NCHC penalty numbers. I did find statically, that the Pioneers are getting significantly more power play opportunities than their opponents. I wasn’t satisfied, and I’ve been digging even deeper. Things keep popping up.

The Pioneers are a good hockey team, but they’re nowhere near as good as they were last season. They’re probably the second or third best team in the NCHC. Also, fans are starting to take notice of the penalty minute disparity and asking questions.

Again, there’s a huge disparity in the number of penalties the Pioneers opponents are taking. After this weekend’s play, I took a look at the eight NCHC team’s season PIM/G. I also took a look at their NCHC conference games PIM/G. If you want to see what it look like, I posted the numbers below.

What’s even more puzzling, DU’s PIM/G actually went down after last weekend’s series against the Miami Redhawks. The first numbers are from last week’s blog post in question.

Here’s something to think about, WMU is taking 50 percent more penalties than DU. I put the PIM/G national ranking below.