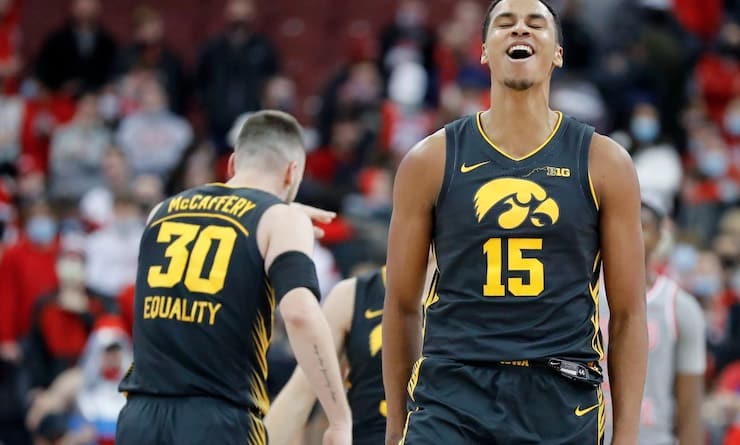 The Detroit Pistons are expected to select Iowa forward Keegan Murray with the number 5 pick in the 2022 NBA Draft. At +100, Keegan Murray has the best odds to be the fifth overall pick at the top online sportsbooks. Read on to learn more about the Pistons’ plans to make Murray the No. 5 overall pick.

The 2022 NBA Draft will take place at the Barclays Center in Brooklyn, New York on Thursday night. The top NBA prospects will get the chance to shake NBA commissioner Adam Silver’s hand and make their dreams come true. One of those prospects, Iowa sophomore Keegan Murray, may already know where he’s going to land on draft day.

Scroll down to get the latest information about Keegan Murray’s NBA Draft projection, odds, and to learn why the Pistons will select him with the fifth overall pick.

The Pistons appear to like Keegan Murray with number 5 pick  in the 2022 NBA Draft but fans can still cash in on Detroit’s selection at the best NBA betting sites.

Pistons fans can cash in on the best NBA Draft odds and bet on Keegan Murray (+100) to be selected with the No. 5 pick at the US sports betting sites.

To learn how to bet on Keegan Murray to be picked fifth overall in the 2022 NBA Draft, read our step-by-step guide below.

The best offshore sportsbooks are offering up to $5,750 in free bets for the 2022 NBA Draft.

Below, we’ll rank the best NBA betting offers for the top prospects in the 2022 NBA Draft.

Keegan Murray has the best odds to land in Detroit.

The Pistons own the number 5 overall pick in the 2022 NBA Draft and could use a go-to scorer to pair alongside Cade Cunningham and backcourt mate Killian Hayes.

One of the best wing players in the draft, Keegan Murray has the size, shooting ability, and athleticism to make a difference on both ends of the floor for the Detroit Pistons.

The Iowa forward averaged a healthy 23.5 points per game while sporting an effective field goal percentage of 61.4 percent during his sophomore season. He also hauled in 8.7 rebounds per game and shot 39.3 percent from 3-point range, which should make him a valuable commodity on NBA Draft night.

Not only is Murray a terrific fit in the Pistons frontcourt but he also adds an element of toughness on the defensive end of the floor as well. Murray posted 1.3 steals and 1.9 blocks per game in his second season at Iowa, suggesting he could turn into a plus-defender at the NBA level.
With the top three picks in the 2022 NBA Draft expected to be set in stone, there could be some value on Murray to be selected fifth overall. BetOnline, one of the best offshore sportsbooks, is offering +100 odds for Murray to be the number 5 overall pick in the 2022 NBA Draft.

Meanwhile, Purdue guard Jaden Ivey is expected to be picked fourth either by Sacramento or another team that moves up to the No. 4 pick. That would leave Murray as the safest pick and best player on the board for the Pistons, who are a perfect match for the sophomore’s skill set.

Take Keegan Murray to be selected by the Detroit Pistons with the number 5 overall pick in the NBA Draft.

Click the button below to bet on Keegan Murray odds (+100) at BetOnline.