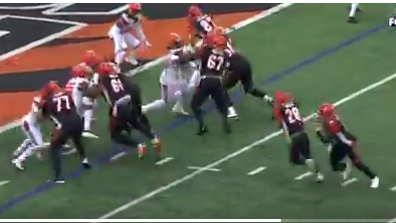 Sunday’s Week 17 game was a pivotal one for Browns head coach Freddie Kitchens, with his job on the line, although his players sure didn’t look like they were interested in keeping him around.

It’s been rumored that Kitchens has been getting into heated disagreements with a few of his players, with Browns receiver Jarvis Landry even yelling “come get me” during the team’s loss to the Cardinals.

It appears to have taken a toll on the team, as the Browns put forth an embarrassingly-low level of effort on this Joe Mixon touchdown run.

It was as if they had decided to just let Mixon score. Pathetic effort.