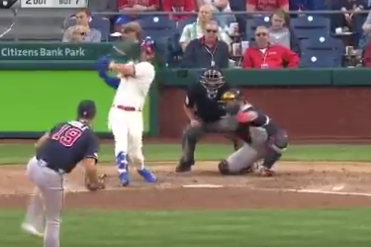 It didn’t take the Phillies’ biggest free-agent acquisition in team history to clear the wall at Citizens Bank Park with a blast, which is exactly what he did during Saturday’s game against the Braves.

Harper came to the plate in the bottom of the seventh inning, and took the first two pitches he saw. The third one, well, Harper appeared to like that one, and he crushed it into the right-field stands.

The ball traveled 465 feet,  so it wasn’t like Harper got lucky on the swing, or had the ball carry from a wind gust. He annihilated that pitch, and it was his first home run since joining the Phillies.