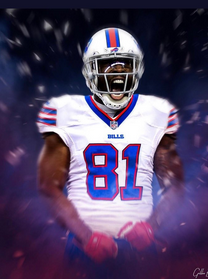 Bills GM Brandon Beane said a couple of weeks ago that Anquan Boldin needed time to assess his family situation before deciding whether to play NFL football in 2017. Buffalo’s patience with Boldin was rewarded Monday as Boldin signed with the Bills. Buffalo welcomed the veteran wideout to One Bills Drive on a free agent visit last month, and he met with members of the coaching staff, but it took him a couple of weeks to determine he would play a 15th season. (Bills.com)

Mind of Joe
I’ve always been a huge fan of Anquan Boldin. I mean, who the hell isn’t? Not to break out the grit cliche chart, but all of his traits are listed on there. He makes catches in traffic and is your classic run after the catch WR. He’s tougher than a 2 dollar steak. I would not automatically say he’s a #2 WR guy by NFL standards, but he’s more of a situational guy. He’s a guy who you are going to want in the red zone and probably be inserted on more running plays. Another key that I’m sure will get mentioned is him mentoring a young WR core. Boldin has been on SB winning teams and teams that were god awful. He’s seen it all and I think that will help as being a locker room leader.

I think at 4-million bucks if he achieves incentives, is a perfect WR to be a bridge-gap to Jones/Holmes.  Now, I do think his numbers will probably drop a bit as there’s quite a difference between playing with Tyrod Taylor and Matthew Stafford. Additionally, he’s not going to burn your DBs and he’s up there in age. He’s going to be that underneath guy who gets tough 7-yard receptions.

Overall, it is a good signing, but please don’t start thinking he’s going to be Boldin from 2010. That’s not him anymore and this offense won’t get confused with what he had in Arizona or Detroit.