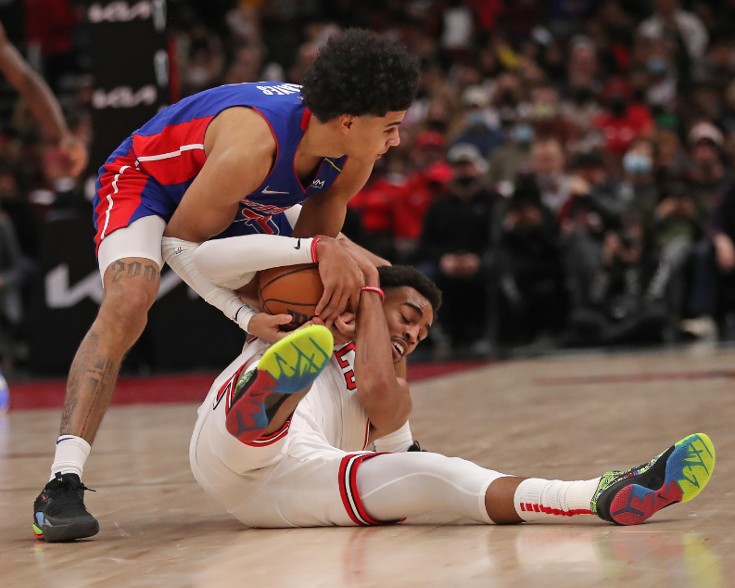 In Wednesday night’s intraconference rematch, the Chicago Bulls are facing off against the Detroit Pistons at Little Caesars Arena; free NBA picks are posted here. This is the fourth encounter for these teams during this 2021-22 NBA regular season. Continue reading for Bulls vs Pistons preview content.

Will DeMar DeRozan and the Bulls squash their five-game losing streak? DeRozan is averaging 28 points and 5.1 assists per game. The Pistons have not defeated the Bulls since Mar. 10, 2019. In addition to the injury report, prediction and odds, free NBA picks are available below.

For tonight’s Eastern Conference mismatch, the Bulls are five-point favorites on the road. Chicago is 33-7 as a favorite, 6-19 as an underdog and 14-16-1 ATS on the road. To add to the information above, the Bulls’ over/under away record is 15-15-1. The team is 1-5 ATS in its previous six games played.

On the other side, Detroit is 2-1 as a favorite, 16-46 as an underdog and 18-14 ATS at home. And, the Pistons’ over/under record at home is 16-15-1. They are 4-1 in their last five matchups against Eastern Conference opponents. BetOnline odds are viewable below.

The Bulls have four players listed on their injury report: C Nikola Vucevic (questionable), SG Alex Caruso (out indefinitely), PG Lonzo Ball (out indefinitely) and SF Patrick Williams (out for the season). Vucevic’s hamstring is feeling better, so there is a good chance that he’ll play tonight.

Next, the Pistons also have four players on their list: PG Frank Jackson (out indefinitely), SG Hamidou Diallo (probable), C Isaiah Stewart (out indefinitely) and PG Killian Hayes (questionable). Although Diallo has an unknown non-COVID illness, he was upgraded to probable a couple of hours ago.

Additionally, the Bulls rank fourth overall in the Eastern Conference. The team currently trails the Bucks, 76ers and Heat. They are 4.5 games back behind Miami. Chicago’s conference record is 24-17. As for the Pistons, they rank 14th in the standings. Their conference record is 14-25. If not for the Magic, the Pistons would be the worst team.

Bulls’ winning streak has transitioned to a five-game skid

The Bulls are 5-5 in their previous 10 games played. Chicago won five consecutive games over this stretch, but the team then went on to drop the next five straight. Their 116-110 defeat versus the Grizzlies on Feb. 26 started this unfortunate losing streak. On Monday, in the Bulls’ 121-106 road loss to the 76ers, guard Zach LaVine scored a team-high 24 points in 37 minutes played.

Forward DeMar DeRozan closed out his outing with a double-double, amassing 23 points, 11 rebounds and 8.0 assists in 39 minutes on the court. Chicago outrebounded Philadelphia 48 to 38. However, their shooting accuracy was inferior to Joel Embiid and the 76ers’ starters. Chicago is 1-5 ATS in its last six games.

Pistons are striving to win their fourth straight game

The Pistons are 6-4 in their past 10 contests. They are also on a three-game winning streak. Detroit defeated Toronto, Indiana and Atlanta in its last three games played. In the Pistons’ 113-110 home win over the Hawks in overtime on Monday, rookie guard Cade Cunningham finished with a double-double. He accumulated 28 points, 6.0 rebounds and 10 assists in 43 minutes of action.

Both struggling teams shot below 70% at the free throw line, though, the Pistons made additional baskets in overtime to seal the victory. Detroit shot 43-for-93 (46.2%) from the field and 12-for-33 (36.4%) from 3-point range. For a reminder, the total has gone over in four of the Pistons’ past five games played on a Wednesday.

Despite the Bulls dropping their last five games, oddsmakers have them as five-point favorites over the Pistons. Chicago has also covered the spread in its past five road matchups against Detroit. While some bettors might be tempted to take the Pistons to win tonight, they haven’t defeated the Bulls since 2019.

Referring to ESPN’s Basketball Power Index, the Bulls have a 59% probability of winning.

The total has gone under in 10 of Detroit’s previous 14 matchups versus Central Division opponents. In conclusion, pick the Bulls to win, they will cover the spread and the total will go over 227.5. More NBA picks are on the main page.