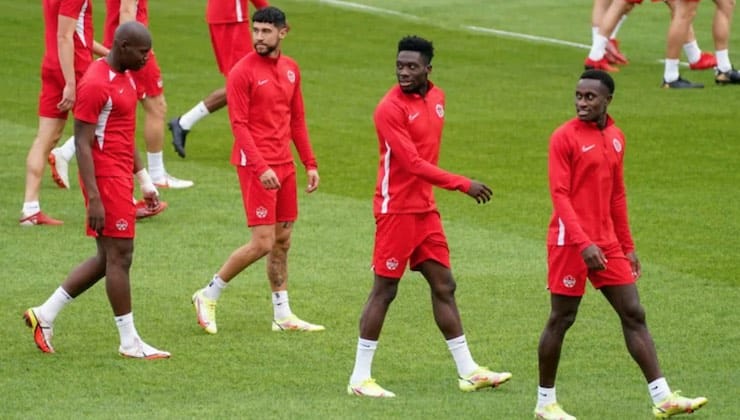 The Canada men’s soccer team is flying high after their defeat over Japan in Dubai ahead of the World Cup.

While there have been several doubts about how the Canadians will stack up in international play, the win over Japan shows the fight in Team Canada.

The 2022 World Cup in Qatar will mark the first time that Canada Soccer has qualified for the tournament since 1986.

During that World Cup, the Canadian Soccer team lost every game and failed to score a goal versus international opponents.

Canada is Confident After Defeating Japan

The Canadian men’s national team landed in Dubai to take on Japan on Thursday in an unofficial fourth World Cup match.

For the Canadians, the match will help the young team gauge the level of play and types of situations that they’ll face heading into their Group F opener on November 23 against Belgium.

Japan is one of the perennial World Cup participants out of Asia. The Canadians came out on top in the dying seconds of the second half.

As Richie Laryea was taken down in the box, the Canadians were awarded a penalty and capitalized, giving hope to the squad ahead of the group stages.

Earlier this year, the Americans fell 2-0 against Japan. Meanwhile, the Canadians fell 2-0 to Uruguay, so the win is undoubtedly a step in the right direction for Canada Soccer.

Soccer fans can catch the World Cup beginning on Sunday as the best players in the world are set to compete in Dubai with a chance at history on the line.

Despite Canada’s sloppy win over Japan, there are a few key takeaways from the Canadian national team’s play.

Alphonso Davies still hasn’t been released to the club. The captain, Atiba Hutchinson, made his return against Japan. Against Uruguay, his presence on the pitch was missed as Hutchinson is the heart of the midfield.

Heading into Qatar, many questioned if Hutchinson would be in peak form. So far this season, Hutchinson only has 70 minutes in his leg after starting a Turkish Cup match on November 9th.

In the last two days of training, it looks like Hutchinson has been slowly adapting as he prepares for his first high-intensity match since June.

Hutchinson will be one of the World’s cup oldest participants but his veteran presence is needed with such a young crew.

Davies to Return to Club in Qatar

It seems that Alphonso Davies is still recovering from his hamstring strain.

The Canadian coaching staff are waiting on his final assessment before the soccer star can be released to the club.

However, all parties expect him to be 100 percent for the Belgium match next week.

Even if Davies is healthy enough to play, the Canadians will have a tough task ahead of them taking on Belgium, Croatia and Morocco in Group F.

According to the best soccer betting sites, Canada has +280 odds to advance from the Group stages.