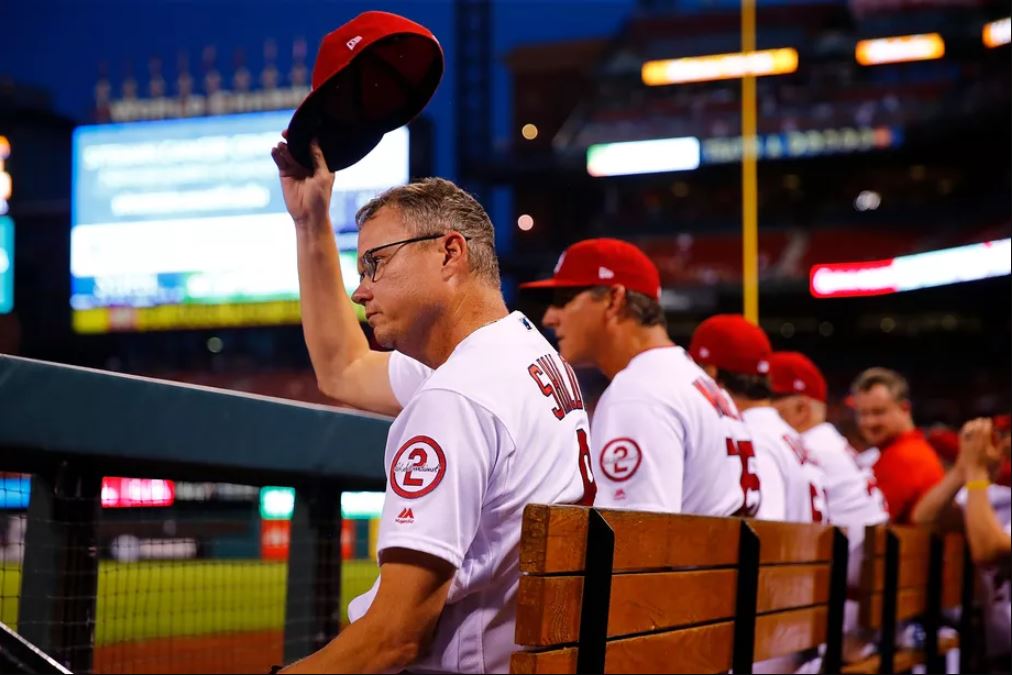 One of the positions is expected to be filled by Memphis manager Stubby Clapp, provided that he is not hired as a major league manager elsewhere. He is reportedly going to be interviewed as part of the search for a hitting coach, and he did fill that roll at the AA level for the Toronto organization, prior to becoming a manager within the Cardinals system.

As much as I look forward to having Stubby on the big league staff and hope that he remains with the organization for 2019, I can’t help but hope that he winds up as the First Base coach.

I just have higher ideals for hiring a Hitting Coach.

I believe that this is a perfect opportunity to bring in an outside perspective, in the form of an analytically adept coach to lead the Cardinals hitters in the modern baseball landscape.

I’ll tell you that I don’t have names in mind for this position. I’m not well versed in the coaching depths of all MLB organizations. The Cardinals are much smarter than I, and they can identify the candidates that could provide a fit. I’m not trying to put together a pool, I’m just setting up what I think they should look for and why.

Before I get into the benefits of the analytics and how it would fit, let’s take a detour and talk about the ‘outside hire’ aspect.

The Cardinals have been incredible when it comes to promoting coaches from within. It is good business practice to do this, as top employees will see the advancement opportunities and give their best efforts to gain promotions. It’s very difficult to motivate employees if they see stagnation in regards to personnel movement and view their position as a ‘dead-end job’.

Kudos to the Cardinals for not allowing that to happen.

However, there are times when bringing in an outside voice can be productive as well. We saw the Cardinals do this when they hired Mike Maddux prior to the 2018 season. I believe they should do the same with the Hitting Coach position this year.

We tend to exist in bubbles. There is a limited number of people that we interact with and locations we frequent. We form worldviews from within this self-created environment. Occasionally, we step outside the bubble and realize that our worldview, although it may not be wrong, is not the same as everyone else. It can be refreshing, or shocking, and a good opportunity to learn or challenge our thinking.

The Cardinals have been installing updates since mid-July, and the computer is about to restart for 2019. They have a new manager. They are working on a new approach to spring training. This is the time to bring in a fresh voice to avoid groupthink and, more importantly, avoid falling into the ideals of the past regime because ‘that’s the way we’ve been doing it.’

I keep coming back to this term to describe the coach I’m hoping for. I don’t want to say analytically-driven or strictly analytical. They don’t have to hire a Statcast “nerd” to be their hitting coach. What I am hoping for is someone that can achieve what has been done with the Houston Astros. Their players have full buy-in on analytics. The numbers have been explained and related to them in ways that they have gained a full understanding. When you hear interviews with Astros players they use terms like spin rate, xFIP, spray angle, launch angle. They understand what these measurements are telling them and how to apply them to make adjustments, or play to their strengths.

I don’t know if you’ve noticed, but the Astros are really good.

But you can’t lose the human coaching and baseball IQ side of it, either. That’s why I keep coming back to ‘adept’ as the right word. The coach needs a full understanding and ability to relay and relate the information to the players, along with the traditional aspects of the job.

And let me walk back what I said earlier. Maybe Clapp is the analytically adept guy they need. He may blow them away in his interview for the job. I won’t rule him out, I’m just don’t have a feel for what kind of hitting coach he would be.

Way back when Mike Matheny was hired, it was touted that a) he would be great with young players and b) he would be receptive to the newer ways of viewing things, including analytics. Many thought that the hire would bring synergy to the front office, dugout, and analytics department.

It proved to go quite the opposite direction.

All accounts pointed to Mike Matheny being resistant to the information. He wanted to manage with his instincts. The numbers would have been a useful tool for decision making and strategy. He wouldn’t embrace them, nor did his staff.

A specific example was Derek Lilliquist. Upon his firing, it was reported that he was continually given binders of information from the analytics team, and he continually left them unopened.

In May of 2018, the front office approached Matt Carpenter with advanced metrics, inviting him to sit down and encourage him that his process was sound and the lack of results was derived from a lot of bad luck. My question here is, why did the front office have to take this initiative? Why, if the information is available to the coaching staff, aren’t the coaches having these sorts of meetings with struggling players?

That’s something that can be addressed by leaning analytical with the hitting coach hire.

When Mike Shildt ascended to the Quality Control coaches position in 2017, a common reaction within the media was that he would serve as the Front Office’s direct line to a dugout that had grow disconnected. There was a belief that he would be the one to champion some of the advanced metrics being passed down from the analytics team. While he doesn’t sell out to the numbers, he is receptive to all information that can help him win games. If the leader embraces the information, the coaching staff will follow.

Shildt also allows his coaches to coach. Unlike before, the current leadership would allow such a non-traditional hire to work.

I believe the hitting coach is a position where the lines of organizational communication can be opened up even more. Pitchers are really good in today’s game, therefore using all available information to find an edge is ideal. A hitting coach that gets buy-in from the players and helps them understand their strengths and weaknesses through empirical evidence — not just feel and video review — can help the offense perform consistently.

I also believe that the analytical approach from the primary hitting coach would complement well with the mental approach of assistant hitting coach, Mark Budaska. Rather than having two more traditional hitting coaches with similar, sometimes overlapping, messages (see: redundancy), they can approach hitting from two different angles, to reach the common goal. Different players need different messages at different times. The two differing approaches would play well together.

Shildt is a believer in focusing on what you do well. Analytics provides measurements that help players identify what they do well, and concentrate on that part of their game to sustain success.

After years of watching a start-stop offensive team, consistency would be welcome.

Being analytically adept can help you move towards that goal.

Hiring a modern hitting coach is the first step.