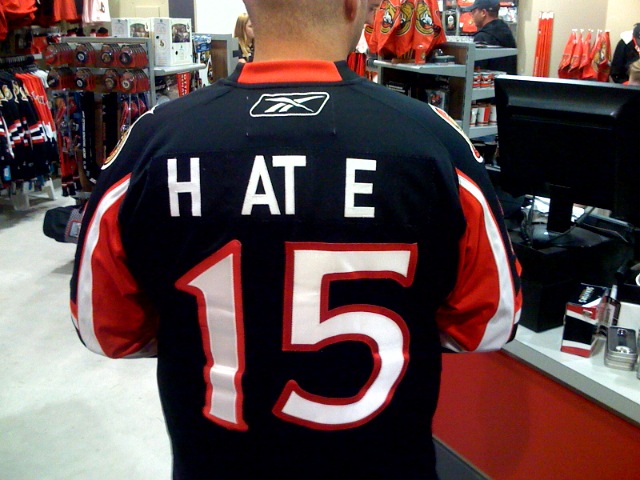 Even if you’re a non-fan of the Cardinals (and let’s assume for the moment you are), it’s hard not to be impressed by Carlos Beltran’s postseason productino.  Going into tonight’s World Series Game 3, Beltran has 13 October RBIs in as many games.  Although this is Beltran’s first World Series, he has a remarkable postseason résumé, which includes 16 homers, 38 RBIs, and a .339 batting average in 47 games.

As you may have heard, Beltran bruised his ribs robbing David Ortiz of a home run in Game 1, and early indications were that he might have to sit out the rest of the series.  It turns out Beltran did play in Game 2 – and it was thanks to what might accurately be described as a performance enhancing drug.  In his World Series notes, Brewers beat writer Tom Haudricourt pointed out that Beltran has earned a lot of respect from his peers:

Beltran took a pain-killing injection to be able to get on the field and go 2 for 4 with an RBI single.

"Carlos is a fierce competitor and it doesn't surprise me one bit that he's out there."

In a story headlined “Resilient Beltran pads postseason legacy,” MLB.com reporter Anthony Castrovince says the drug Beltran took is Toradol, which he describes as “modern medicine” and more specifically a “non-steroidal anti-inflammatory that is an alternative to cortisone. It's a legal substance not banned by MLB.”

Of course, anabolic steroids are also modern medicine.  They have a number of known medical uses, and there is evidence steroids can help recovery from muscle contusion.  Ryan Braun infamously said he used banned substances in 2011 because he was “dealing with a nagging injury.”  The general consensus is that Braun is a cheater for using a drug to recover from injury, while Beltran is resilient and a fierce competitor.

Toradol is not banned by MLB, but what is and isn’t illegal in sports is largely arbitrary.  MLB didn’t ban steroids until 1991 (and didn’t even seriously test for them until 2004).  Amphetamines had been widely used throughout baseball history, and they weren’t banned until 2006. The list of MLB banned substances is nearly 100 items long – many of which have legitimate medical uses.  How do we know Toradol or other currently legal examples of “modern medicine” won’t be banned by MLB in 10-20 years?

No one doubts Beltran is a fierce competitor who has a lot of guts for playing through an injury.  If Beltran needs a legal performance enhancing drug to do so, fair enough.  I would just observe that our attitudes about which performance enhancing substances are acceptable – and which constitute cheating – are probably inconsistent and certainly subject to change.