‘Cause I Got Some Weird Ideas In My Head

Things To Do In Denver When You’re Dead is still my favorite Zevon song. The movie wasn’t great, but I do appreciate that there is a character named “Easy Wind” in there.  The game against the Steelers seems like it was weeks ago at this point.  It felt like more than one game in itself.  I lamented beforehand that the Chargers hadn’t yet found a way in any game to put the opposition away when they went up by 4 or so.  They certainly tried on Sunday Night.  Of course, it was annoying when Al Michaels and Collinsworth kept bringing up the meltdowns of the past, but let’s be honest that anything those guys say is annoying at this point. 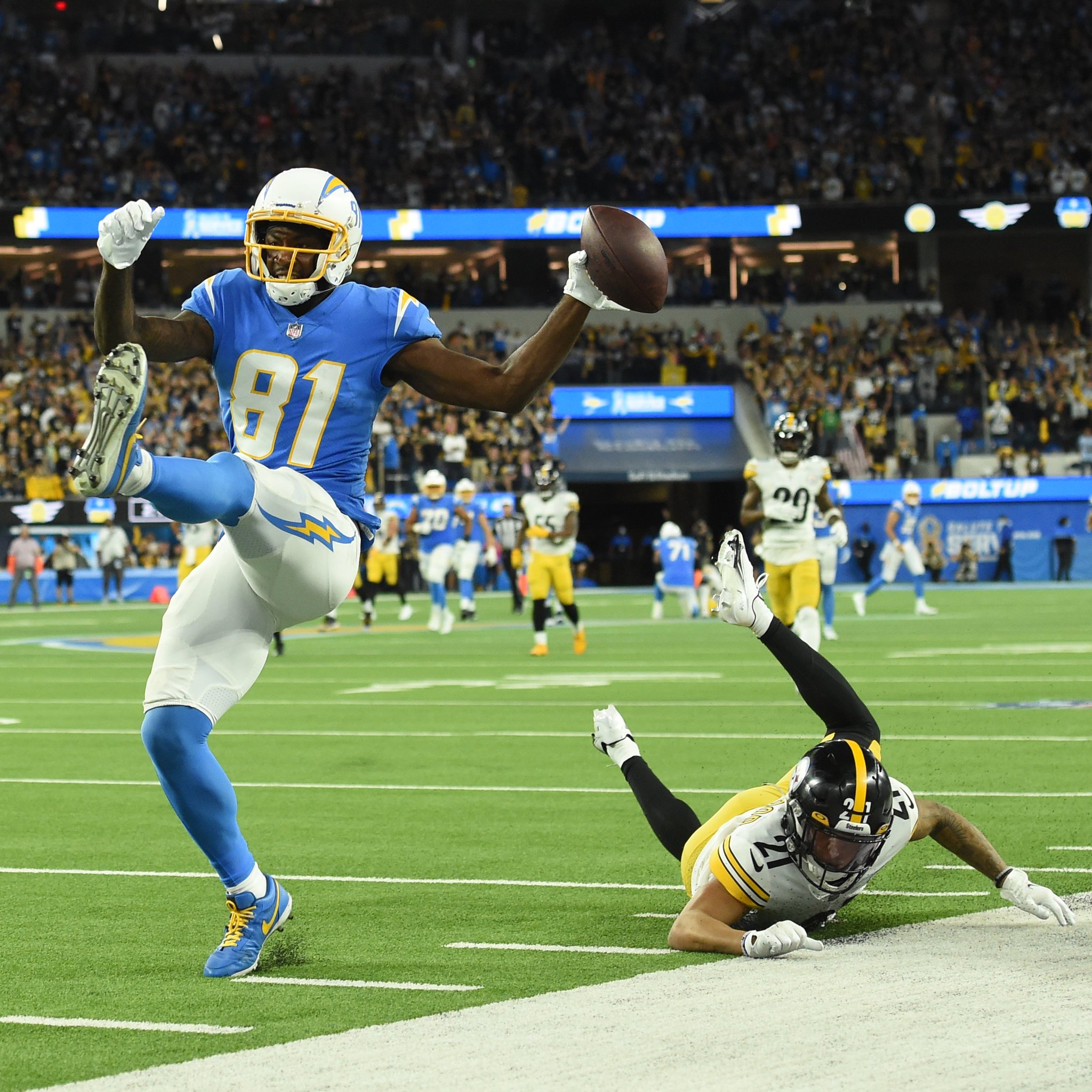 It’s annoying most of all because all those things they are talking about actually happened and we had to suffer through them all.  I would love to think that Al Michaels is actually checking his phone and finding out that the Bolts have imploded once again.  More importantly, check out Justin Fucking Herbert in this shot walking off the field in this photo.  Especially coming off of the Vikings game, he was everything we could have asked for and more.

So what the fuck happened?  We were up by 17 points and even I didn’t think we’d cough up the lead, at least not so quickly.  Before I go down the rabbit hole with you, FAITHFUL READER, let me remind us all that just as things seemed their bleakest, Herbert was on the sidelines hyping up the team.  He truly believes he can do anything and maybe he can.  I’m willing to find out, but would have loved for us to close that game out in more conventional fashion.  On the blocked punt, it appeared that Tranquill was the main culprit.  He didn’t talk about it at all post game and we were all just happy he played after being on the COVID list.  He said he was a bit winded but since Murray’s ankle seemed to keep him out for a lot of the game, I guess we’ll let it go.  Long takes forever to kick and it’s surprising that we haven’t had more blocked.  Is it possible to create some West Coast quick release system for him?

It’s nice to Mario Lopez grabbing the next gen Saved By The Bell kids and steering them towards the Bolts.  Forget the cast of “The New Class,” those kids are beyond redemption.

The run by Herbert was simply amazing.  He clearly has been making an effort to avoid being hit while scrambling.  I think it was on the Pat McAfee show where he cited that first touchdown against KC last year as the impetus.  It was genius when he pump faked on one log run and was not only way past the line of scrimmage, but had also gone past the first down marker.

The Heyward hit was bad.  Herbert clearly was going to go out of bounds before realizing how much room he had in the middle of the field.  Heyward busted his ass to get down there, but it was a dirty hit.  Remember when Orlando Brown was suspended after losing his shit during “temporary blindness?”  I am sure Heyward didn’t realize he was punching Herbert, or at least as blatantly as it appeared.  He still should have been ejected.  I remember thinking James Harrison should have been booted from the Super Bowl and he later made a huge interception off Kurt Warner.  Heyward very well could have been the hero of Sunday Night.  How fucked up would that have been?

The pass defense left something to be desired and will continue to be under fire with Samuel’s second concussion.  I think we’re stuck with Davis, Harris, and Campbell for the forseeable future.  The Steelers went after Campbell, who continued his free fall from the Vikings game. 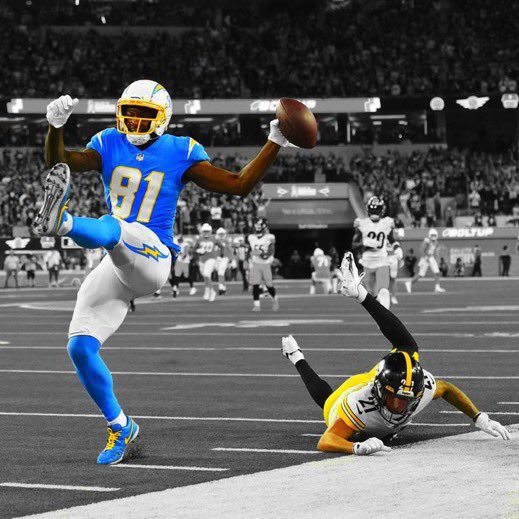 I don’t need to remind anyone of his interference in Denver last year, especially since he had one on Sunday.  As Staley said in his postgame, it wasn’t even needed since the play was covered properly.  I know Staley thinks that this is the part of schedule where they can make a run.  Clearly, they will need to since everyone in the AFC West has at least 5 wins.  His relationship with Vic Fangio (and the Broncos themselves) is well-documented, mostly by Staley himself.  The NFL really has become a league of parity.  Listening to Staley talk, it’s obvious his idea of building something is no fucking joke.  That doesn’t mean that we can’t win it all this year, but it seems like he is trying to put together a squad of his players and coaches and knows he doesn’t have all the parts yet.  He can praise Jerry Tillery in an effort to coach him up.  He can even put him back into the starting lineup this week, but he sees what we do.  Actually he sees much more since I think we can agree he’s a really good coach.  He can get whatever run stops on Sunday he can out of Tillery and know he’s not going to be back with the team next year. 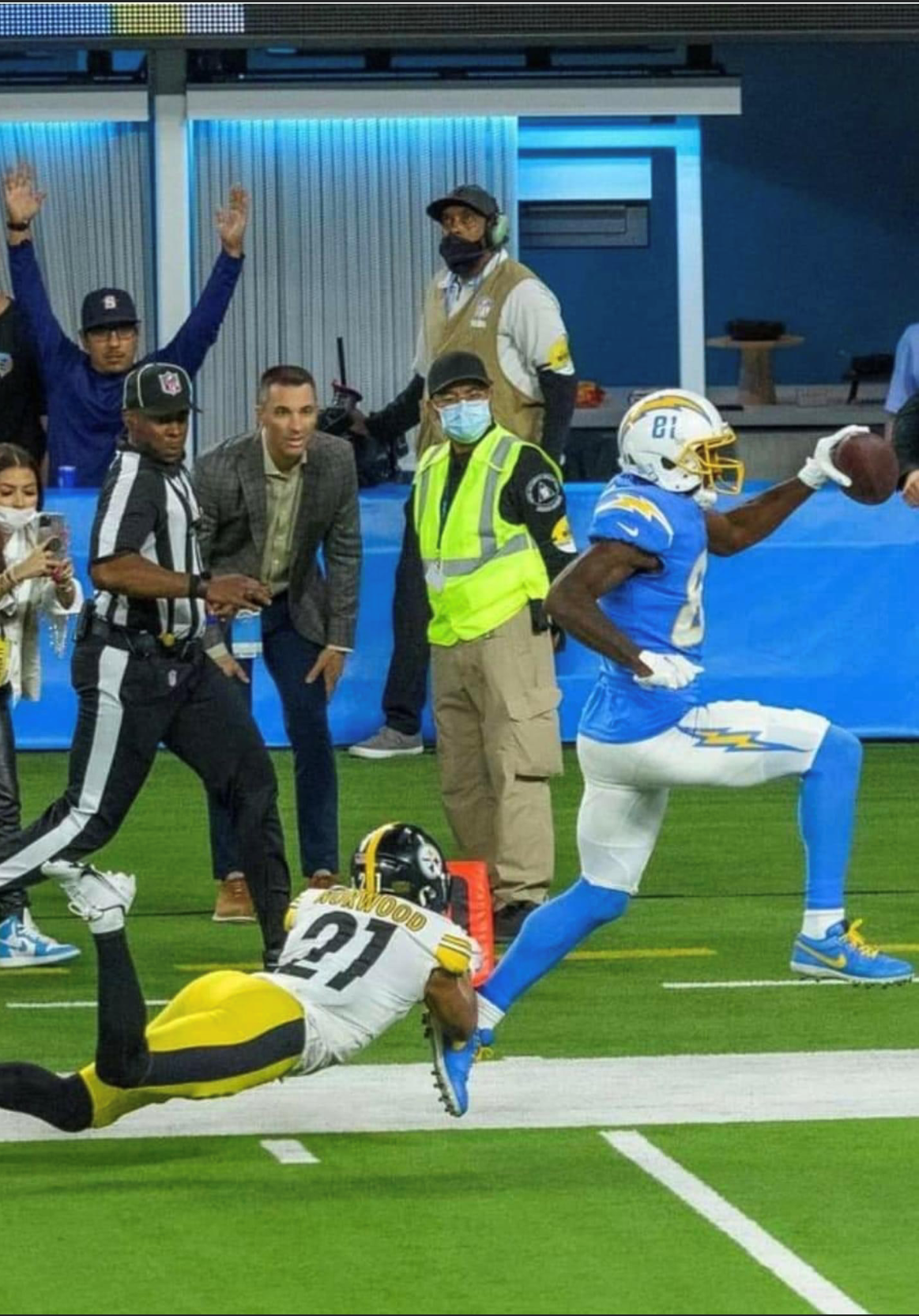 I Tweeted this picture out once I noticed that Telesco was standing on the sidelines.  The day after the game, Sam asked me what I did once this play happened.  I told her the truth.  I walked into the kitchen and waited for the flag to come down.  You could say I am still waiting and that it’s a metaphor for being a Charger fan.  But this season, and this year of my life, has been all about trying to enjoy it as it happens.  I was pleasantly surprised how the defense shut down the Steelers on that last drive.  Bosa, fresh off the COVID list, had two early jumps that were flagged but came up huge when it mattered most.  Was there a part of me that wondered where that pressure was for the rest of the game?  I know that it’s different when they are backed up and you know they need to throw.  Once it got to 4th and 29, of course I thought about the Baltimore game.  I actually was more worried about our inability to stop long gains from this season, the Vikings game especially. 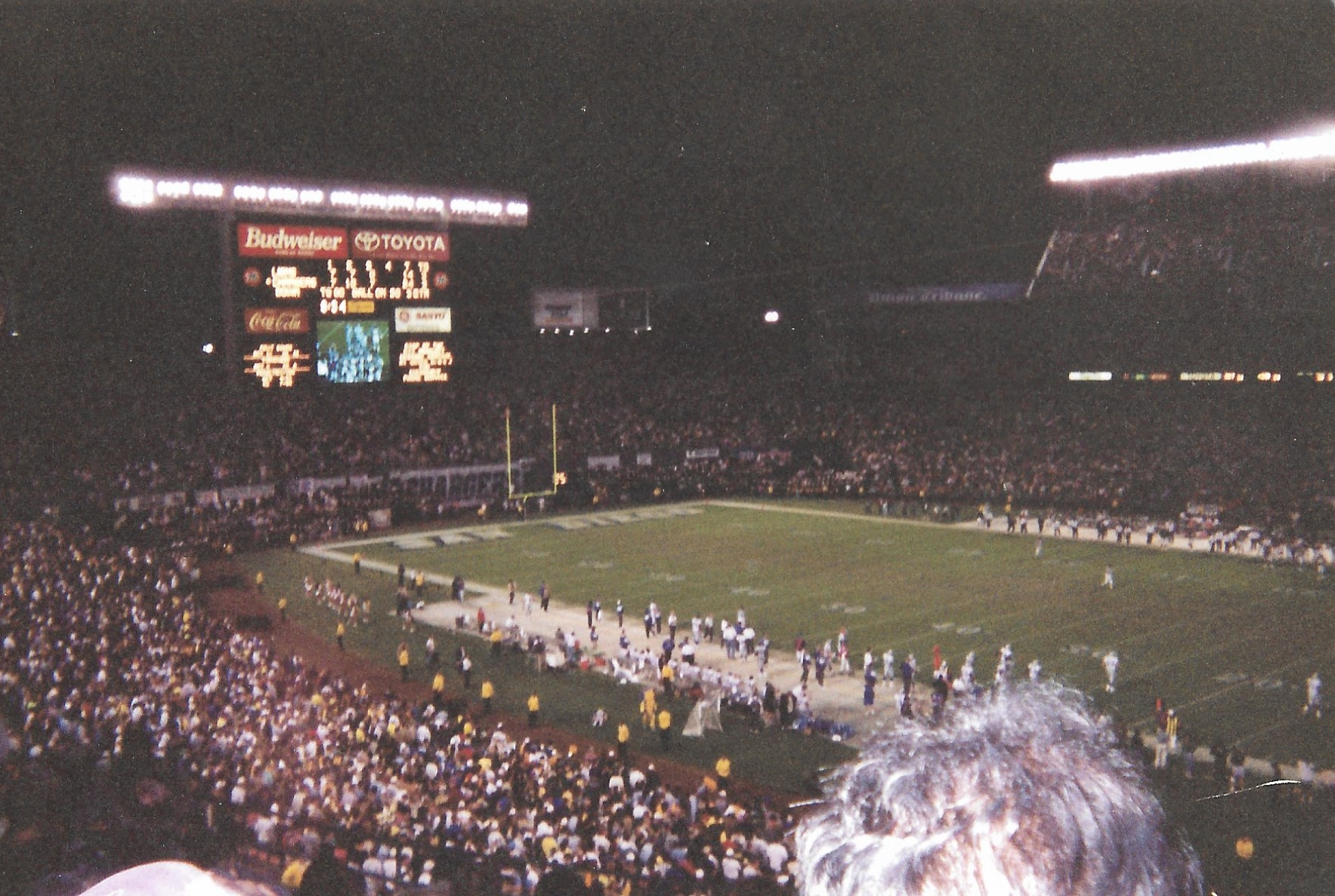 Anyway, this is from my first trip to California to see the Chargers.  It’s the MNF game against the Lions in 1996.  That was the game with the Hail Mary to Andre Coleman to end the first half.  I don’t feel like I need to write much about what the Bolts need to do tomorrow.  They just have to win.  It’s just that simple. 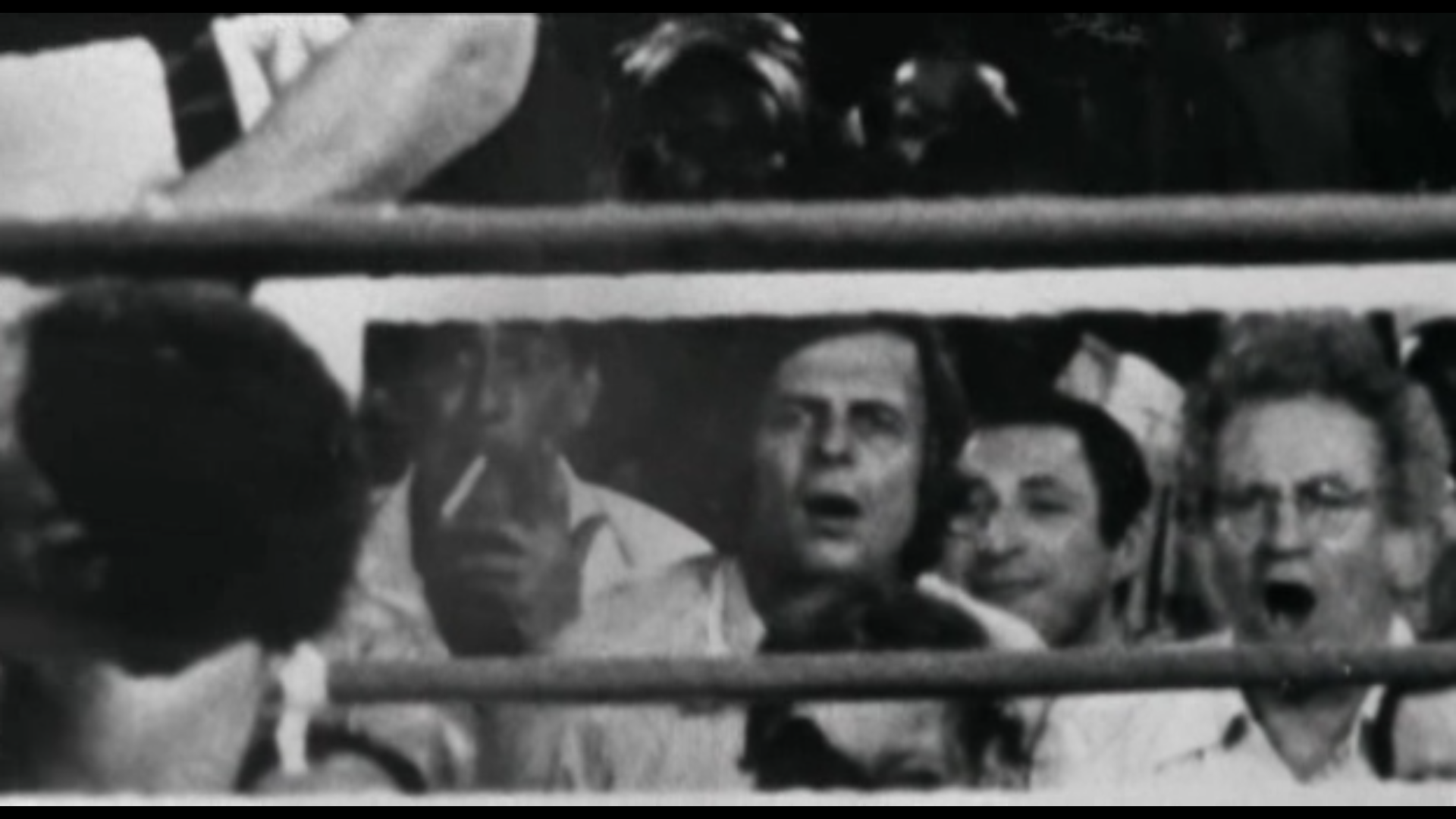 Incidentally, the photo of Telesco reminded me of this genius shot from the documentary “When We Were Kings,” about the Ali/Foreman fight.  Check it out if you haven’t.  That’s George Plimpton and Norman Mailer, who both appear in the movie and have sadly passed on.  Hunter Thompson, gone as well, was the subject of a great piece by Plimpton.  Read it here.  Now Bolt The Fuck up.  Talk to you soon.