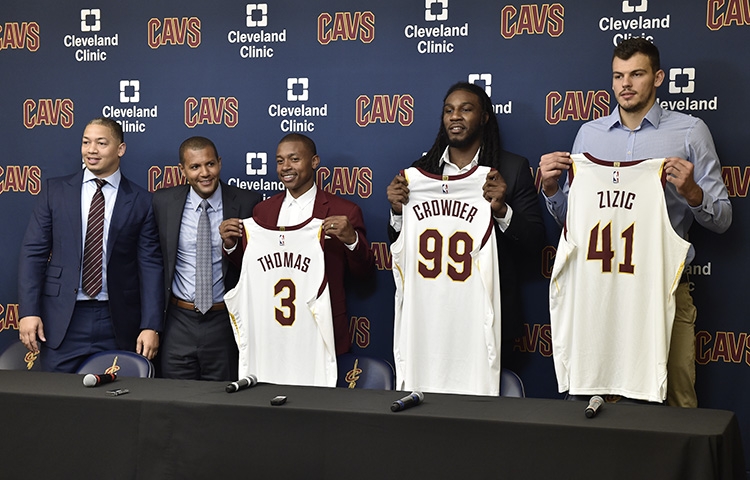 The Cavaliers introduced their new trio today, but GM Koby Altman was not in the mood to expound on Isaiah Thomas’ hip:

“Y’all hear that?” Thomas chimed in, following Altman’s statement. “Everybody wants to be doctors now.”

Altman, who was flanked by Thomas and coach Tyronn Lue, made clear that he did not want either Thomas or anyone else to discuss the hip injury that cost Thomas the last three games of the Eastern Conference finals last season and will apparently cause him to miss at least a portion of the 2017-18 season.

Lue mentioned that Thomas would not start the season, declaring Derrick Rose the team’s primary point guard with Jose Calderon backing him up in Thomas’ absence.

A few other observations:

Damn. Jae Crowder said he whispered to his mom he had been traded to Cleveland and then 5 minutes later she was gone. 🙏🏾🙏🏾

Jae Crowder said he was growing concerned about his role and asked for direction from Boston. "I think they gave it to me with the trade."

Regarding Horford, Hayward and Irving landing in Boston, Isaiah Thomas says, "We built that," as he nods at Jae Crowder.

An NBA team exec watching Cavs press conference, texting: "It sounds like they have no idea when he is going to be able to come back."

I give Isaiah a lot of credit for the Celtics resurgence last season, but the “we built that” is a bit of a stretch. This rebuild belongs to Danny Ainge and Brad Stevens.