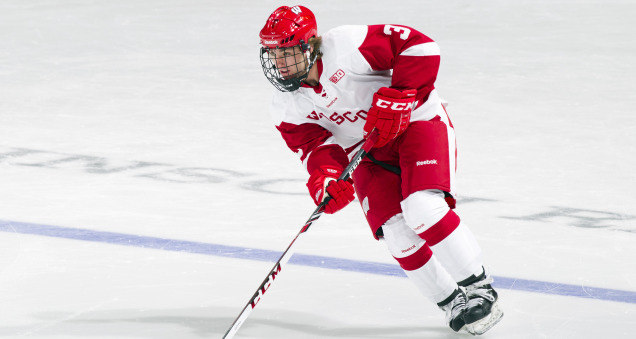 Wisconsin Badger and senior defender Corbin McGuire was named one of Big Ten Hockey’s Three Stars of the Week this morning following his three goal weekend against Northern Michigan.

McGuire scored one goal in Friday’s 3-2 loss to Northern Michigan and two goals in the Badgers thrilling 6-5 victory of the Wildcats.

“He (McGuire) is what you want on the ice,” said Head Coach Tony Granato who earned his first victory as head coach on Saturday. “He wants the puck. He wants to be on the ice to make the play.”

McGuire, who made the switch from offense to defense during the Badger’s last season, seems to be benefitting from the switch.

“He certainly stepped up when he was needed,” Granato said during his weekly press conference on Monday. “He’s getting a grasp of what we’re asking of him defensively really fast. So, I think he’s going to continue to get better. I think he understands he can be an important part of this (team).”

He had two pretty big highlight goals of the three scored this weekend. That included this beauty to tie the game up 5-5 on Saturday:

It is the first time McGuire has earned a spot in the Big Ten Three Stars of the Week.

Wisconsin is currently gearing up for their home-opening series this upcoming weekend with No. 6 Boston College coming to the Kohl Center.