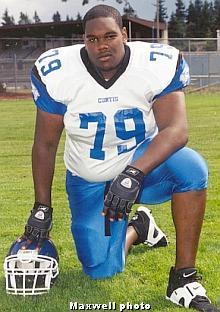 The Cougs got a verbal commitment from an All-State O-tackle, Grady Maxwell, from Tacoma. The story hasn’t broken yet on Cougfan.com, but it did break on Scout.com as he announced late last night. He chose the Cougs over Stanford, Oregon, Cal and UW.

A quick bio on Maxwell – big-time talent. Big kid, 6-2, 315 and pretty athletic to boot. Per his coach: “Grady has great speed. He’s a great left tackle, outstanding both in run and pass blocking and has great feet — exceptionally quick feet.”

He’s got Cougar blood, too, as he’s cousins with Marcus Trufant. He continues the Curtis High School pipeline for the Cougs. Some of the more notable Curtis alumni who have suited up for the crimson and gray include: Torey Hunter, CJ Davis, Virgil Williams, Singor Mobley, Deron Pointer and of course, Mike Levenseller, who was a phenomenal defensive back and wide receiver. Levenseller apparently still holds the SPSL season record with 16 interceptions. He’s smart, too, already has a qualifying SAT score but wants to re-take it anyway. He had a great camp this summer at WSU and was given an offer on the spot (along with commit Andy Mattingly of Mead).

His relationship with Trufant is a big factor in his life. Per a story earlier this year:

PART OF A very close extended family, Trufant spends much of his free time with Maxwell — the first night we tried to reach him we ended up talking to Grady Sr. for a bit as the younger Grady was over at the Seahawk cornerback’s home. Maxwell says Trufant has helped him immeasurably both on and off the field, regularly calling to check on how he’s doing school-wise, talking football and attending as many of Curtis’ games as his schedule allows. “He’s always encouraging me,” said Maxwell of the Seahawks No. 1 draft choice (11th pick overall) in 2003. “He’s always supported me as much as anyone possibly can, (despite the fact) he’s really busy. He’s come to my games whenever he can.” Trufant’s also introduced him to Seattle teammates such as Walter Jones, oft-mentioned as the top left tackle in the NFL. The two lineman have talked about hard work, what college is like and the mental part of the game and it’s importance to an offensive lineman.

Funny note – one home game during Trufant’s career, one of the WSU staff members spotted Maxwell and thought he was a recruit on a visit that weekend. Maxwell, who has always been big for his age group, had to tell the coach he was only in the 7th grade(!).