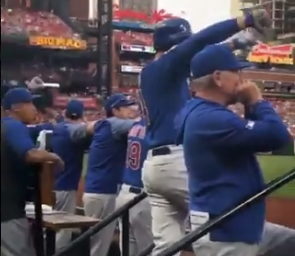 Cubs star third baseman Kris Bryant called St. Louis a “boring city” not too long ago, and Cardinals fans clearly have not forgotten about it.

KB made his first appearance at Busch Stadium in this weekend’s series, and Cardinals fans gave him the royal treatment. Boos rained down from the high heavens when Bryant came to bat for the first time, in what was a surprise to, well, no one.

What was surprising, though, was the way the Cubs reacted to it. Bryant’s teammates, as well as manager Joe Maddon, joined the crowd in booing KB at the plate, which was pretty funny to watch. Check it out in the video below.

#Cubs having some fun in the dugout knowing what the reaction in STL would be for their guy @KrisBryant_23…👎🏻👎🏻👎🏻😂😂😂#MLB pic.twitter.com/jhrVfGypzf

Bryant responded by calmly raking a single, getting himself on base.

Back visiting
Our old
Rivals
In St. Louis.
Nice that we’ve finally
Given locals something to do. pic.twitter.com/PKgbz2V5V0