De’Aaron Fox is the X-Factor for the Sacramento Kings 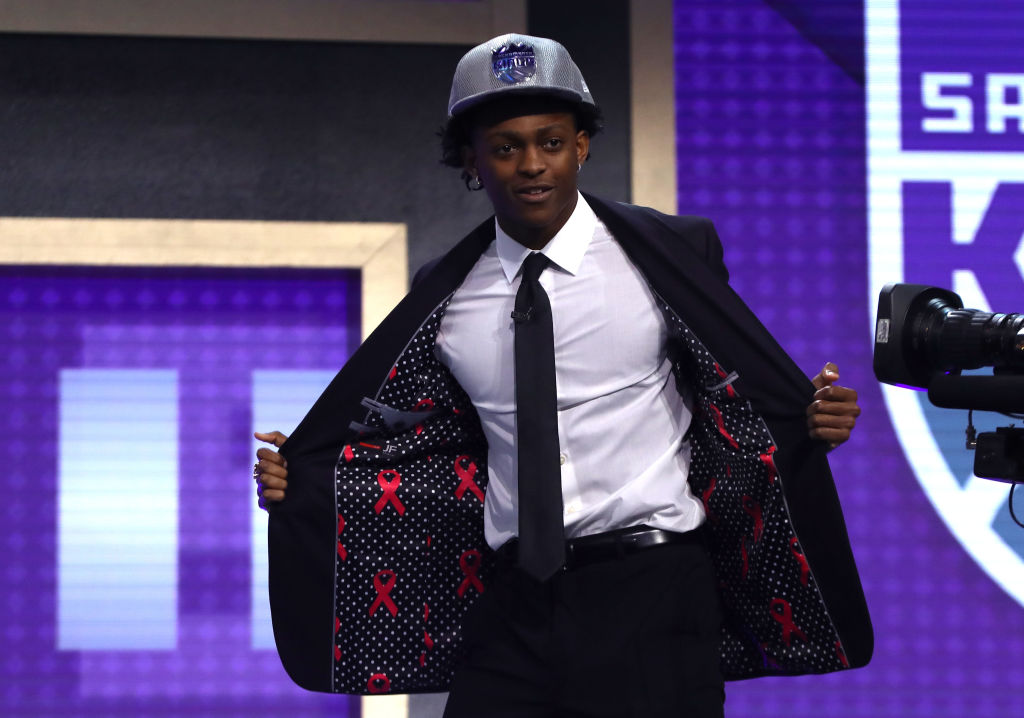 Sacramento is destined to miss the playoffs for the twelfth straight season. Yes, winning is still a ways away for a Kings club caught in the wilderness of the Western Conference, but the franchise might finally be on a path towards eventual contention. And it all starts with De’Aaron Fox.

We’re just a few days from the six-month anniversary of De’Aaron’s dominating display versus UCLA in the Sweet Sixteen.

The 19-year-old freshman had the game of his life against Lonzo Ball’s Bruins, exploding for 39 points (on 13-20 FG, 13-15 FT), four assists, three rebounds, and two steals in 36 minutes. He bothered Ball on both ends while showcasing supreme athleticism.

Nevertheless, questions about Fox’s jump shot resulted in a subsequent fall to fifth on draft night.

The truth is that if Fox was dialing in from distance at Kentucky, he probably would’ve been the consensus No. 1 selection.

He’ll have plenty of time to work on his shooting, but he can still bring a lot to the table even as a youngster. The new Kings culture begins with Fox’s unending effort and enthusiasm, particularly his passion for playing defense. I doubt I’m alone in thinking De’Aaron has the potential to become an All-NBA defender if all goes well.

Prior to the NBA Draft, SI’s Andrew Sharp wrote at length about Fox and his adoration of Kevin Garnett, but given that De’Aaron is not seven feet tall, he might consider finding a guard whose game he can try to study and emulate.

That player suits up in southern California, and it’s not All-NBA defender Patrick Beverley. I’m talking about fellow lefty and 2017 WNBA Defensive Player of the Year, Alana Monique Beard.

At 35 years of age, Beard has been there and done all that which Fox can hope to accomplish in his respective career. Selected second overall in the 2004 WNBA Draft, Alana is an eight-time All-WNBA defender and four-time All-Star who will go toe-to-toe with Minnesota Lynx scoring machine Maya Moore in the upcoming WNBA Finals. Beard’s defense on Moore will be one of the keys to the series, and rest assured she’s ready for the challenge. The things that make Beard such a historic stopper are her length, quickness, grit, anticipation and versatility. She can slow wings such as Moore, stifle guards like Diana Taurasi, and hold her own when forced to switch onto power forwards and centers. Alana is almost always in the right position, helping her teammates, sliding her feet, hands more active than Mount Vesuvius.

It takes desire to defend, and Fox has shown signs that he’ll provide a similar spark for Sacramento that Beard does for L.A. But unless George Hill spends a substantial number of games sidelined due to injury, Fox is unlikely to start as a rookie. It was a very different situation, but Kings coach Dave Joerger was not known for playing rookies much in Memphis. Last year is tough to evaluate in that regard given the late-season trade with the New Orleans Pelicans.

I’ve already said that I think Fox should come off the bench behind Hill (at least to start the year) so as to learn from the veteran and keep one of the two point guards on the court at all times. However, it shouldn’t be surprising if Fox’s play, especially on defense, forces Joerger to promote him at some point in the season. It’s not like Sacramento is flush with two-way wings, and it’s possible Hill (6-9 wingspan) and Fox (6-6.5 wingspan) will prove most capable of defending the three perimeter positions.

Competing for her second championship, Beard also serves as a model for how Fox should be looking to fit in on offense (especially when sharing the floor with Hill or other ball-handlers). Alana cuts hard to the basket, recognizes when to clear out to the weak side, and mostly waits to capitalize on the opportunities that present themselves in half-court hoops. Running with a pair of point guards in Odyssey Sims and Chelsea Gray, Beard is technically the team’s starting small forward, and the offense is rarely running through her hands. Even if Fox is eventually a high usage guard who spends the majority of the game with the ball in his hands running pick and rolls, it will benefit him and the team if he becomes more comfortable off the ball.

The Kings don’t have anyone on the roster that resembles MVP’s Candace Parker or Nneka Ogwumike – not even if Skal Labissiere shatters his most optimistic ceiling – but they may have just landed their Alana Beard.