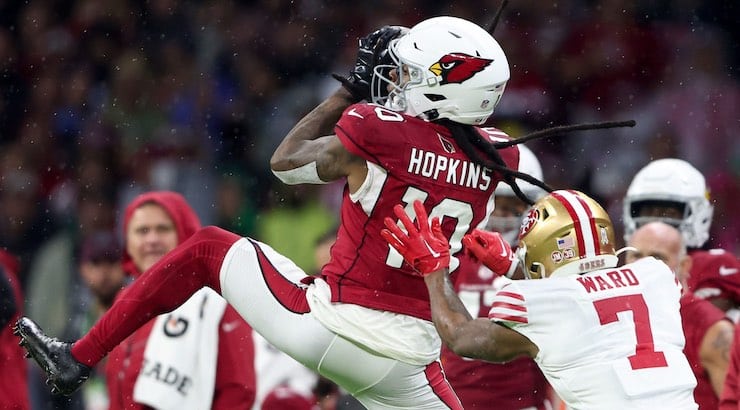 The Mexico sun wasn’t the only heating thing on Monday Night football when the Arizona Cardinals and San Francisco 49ers squared off in a classic divisional showdown last week.

In the background, San Francisco 49ers cornerback Charvarius Ward was going after the Arizona Cardinals DeAndre Hopkins. While there were many words exchanged between the two competitors, the one that stood out most was Ward referring to Hopkins as “steroid boy”.

With the Cardinals gearing up to take on the Los Angeles Chargers on Sunday afternoon, Hopkins didn’t shy away from coming after Ward in his media session.

On Friday, Hopkins challenged Ward to put his money where his mouth is, challenging him to a fight in the boxing ring.

“I would love to get in the boxing ring and see how tough he is in real life,” Hopkins said in response to Ward’s comments.

Check out the video below.

“I would love to get in the boxing ring and see how tough he is in real life.”

While they are division rivals, the Cardinals and 49ers won’t meet up again until Week 18. Despite the trash talk between the duo, Hopkins still chose to take the high road.

Hopkins told Darren Urban via the team’s official website, “Obviously that was very personal. When a young guy like that says something like that . . . it’s a lot of talk. To me it’s laughable. It’s funny.”

Of course, Ward isn’t that young. In fact, it’s his fifth NFL season, so Hopkins didn’t really choose to fight back.

Hopkins was shocked to hear his suspension, the Cardinals’ wide receiver said “in my 10-year NFL career, I have never tested positive for using performance enhancing drugs. To learn that my November test came back with trace elements of a banned substance, I was confused and shocked.”

This Isn’t Hopkins First Run In With A 49ers’ DB

For Hopkins, getting chippy with 49ers’ defensive backs isn’t something new.

In fact, he fought with Jimmy Ward, another 49ers cornerback during joint practices in a 2018 training camp session as a member of the Houston Texans.

Let’s flash back to the fight below.

Today in NFL fights, Deandre Hopkins and Jimmie Ward get after it

Given how his fight went against the much smaller Jimmy Ward, it might be wise for Hopkins to hold off on stepping into the boxing ring.

Hopkins will have a chance for revenge against Charvarius Ward when the Cardinals take on the 49ers in the regular season finale in Week 18.