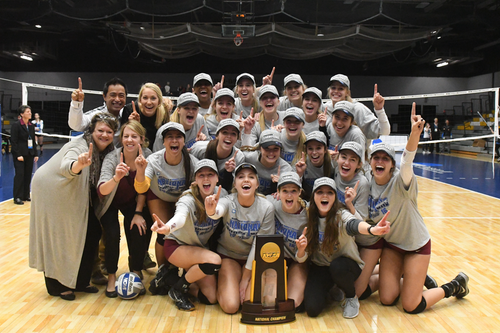 With the Calvin Knight’s victory over the Washington-St. Louis Bears in the DIII championship match, the DIII season has successfully drawn to a close.

But, what is NCAA Division III, or DIII? There are 433 DIII women’s volleyball programs, spread all across the USA, and each school has some great volleyball being played there. DIII is by far the largest component of women’s college volleyball, larger than DI, DII, or NAIA. Straight from the NCAA website we read the following explanation:

“Division III institutions have to sponsor at least five sports for men and five for women, with two team sports for each gender, and each playing season represented by each gender. There are minimum contest and participant minimums for each sport. Division III athletics features student-athletes who receive no financial aid related to their athletic ability and athletic departments are staffed and funded like any other department in the university. Division III athletics departments place special importance on the impact of athletics on the participants rather than on the spectators. The student-athlete’s experience is of paramount concern. Division III athletics encourages participation by maximizing the number and variety of athletics opportunities available to students, placing primary emphasis on regional in-season and conference competition.” Here’s links to some of the stories about the DIII Women’s National Volleyball Championship match.

From the NCAA DIII website, the boxscore for the match:

From the NCAA DIII website, an article about the ending of the DIII season with the final match: