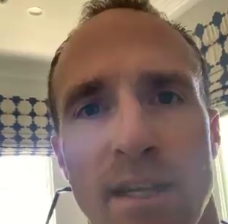 Saints quarterback Drew Brees is a master motivator — leading by example — and he knows exactly which buttons to push to get his teammates to rally behind him.

He does that by showing support for them, which is exactly what he did when the team drafted Michigan center Cesar Ruiz in the first round on Thursday night.

NFL Network’s Jane Slater was in the middle of interviewing Ruiz, when he “crashed” the interview by submitting this video to her — officially welcoming him to the Saints.

How cool is this!!! Right as I’m interviewing new Saints OL Cesar Ruiz a goat crashes our interview. Hi ⁦@drewbrees⁩ Ruiz watched this twice 😂I expect there will be several more times! pic.twitter.com/75zEs3ll0O

That’s one outside-the-box way to show some love for the guy that bends over right in front of you on the field.