The Ducks capped off their non-league schedule with a victory over Fresno State, a team that would probably finish in the bottom quarter of the Pac-12. It was the final warm up before the Ducks start conference play against the best team in the conference; maybe the country, UCLA, next Wednesday.

As they have done all season, the Ducks started off behind in this one. Dillon Brooks scored the first four for the Ducks, but they still trailed, 5-4.  Jodan Bell took over next, and a dunk off a lob pass from Dylan Ennis followed by a free throw made it seven straight for Bell, and the Ducks were in the lead for good, 11-8. The Bulldogs stayed in contact with the Ducks, 19-12, 24-17, with 7:32 left in the first half. But that is when the Ducks turned the heat up defensively, outscoring the Bulldogs, 15-8, for a double digit halftime lead, 39-25.

A lead that size at the half had not happened very often for the Ducks so far, and keeping the momentum going in the second half would be a great sign. Unfortunately, that is not what happened. The Ducks finished the first half shooting 56%. The second half saw the ball and player movement slow down and the Ducks connected on only 36% of their attempts. On the other side, the Bulldogs were the team with purpose to start the second half; going on a 16-5 run to cut the lead to 5, 45-40, with 11:11 to play.

Just as he had done in the first half, Bell was the man with the plan in the second half; stopping the Bulldogs’ run with a pair of free throws to make it 47-40, and Bell scored 6 of the next nine points for the Ducks, including another 3 point play combo of lob pass dun and made free throw to make it 56-50 Ducks with still 8:02 in the game.

A pair of free throws by Brooks put the Ducks ahead, 67-58 with 3:33 on the clock and the win, and the streak of keeping opponents under 70 were secure,. Bell finished the night with a career high, 23 points, 8-11 from the field, 7-8 free throws, He kept it up defensively, 3 blocks, and he also pulled down 8 rebounds and had only one turnover. Joining him double figure scoring was Ennis; 13 points, 4 rebounds, 3 assists, and also, only 1 turnover. Casey Benson had 5 assists, no turnovers and 7 points. Tyler Dorsey and Dillon Brooks were both 3-9 from the field and finished with 9 points each.  The Ducks finished shooting, 25-52, 48.1 %, the 17 assists on 25 made baskets is very good,; would have been even better if not for the poor start to the second half. Fresno State finished shooting, 24-56, 42.9%, their 8 assists to 24 baskets made shows the effectiveness of the defensive effort by the Ducks.

This was a good win. The entire preseason has been a time of trying things out. The team is just now finding out how to bring Brooks back full time, Boucher missed these last two games. Bigby-Williams hasn’t clicked yet; Ennis is rounding in to shape, Pritchard has played very well for a freshman and I think will only keep getting better. Bell is improving a lot around the basket offensively. All of these things and more will have to be at their best when the Ducks open conference play; starting with UCLA next Wednesday at MKA. 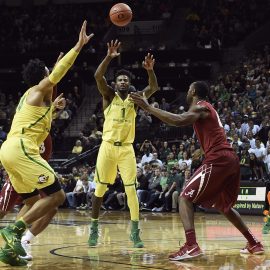