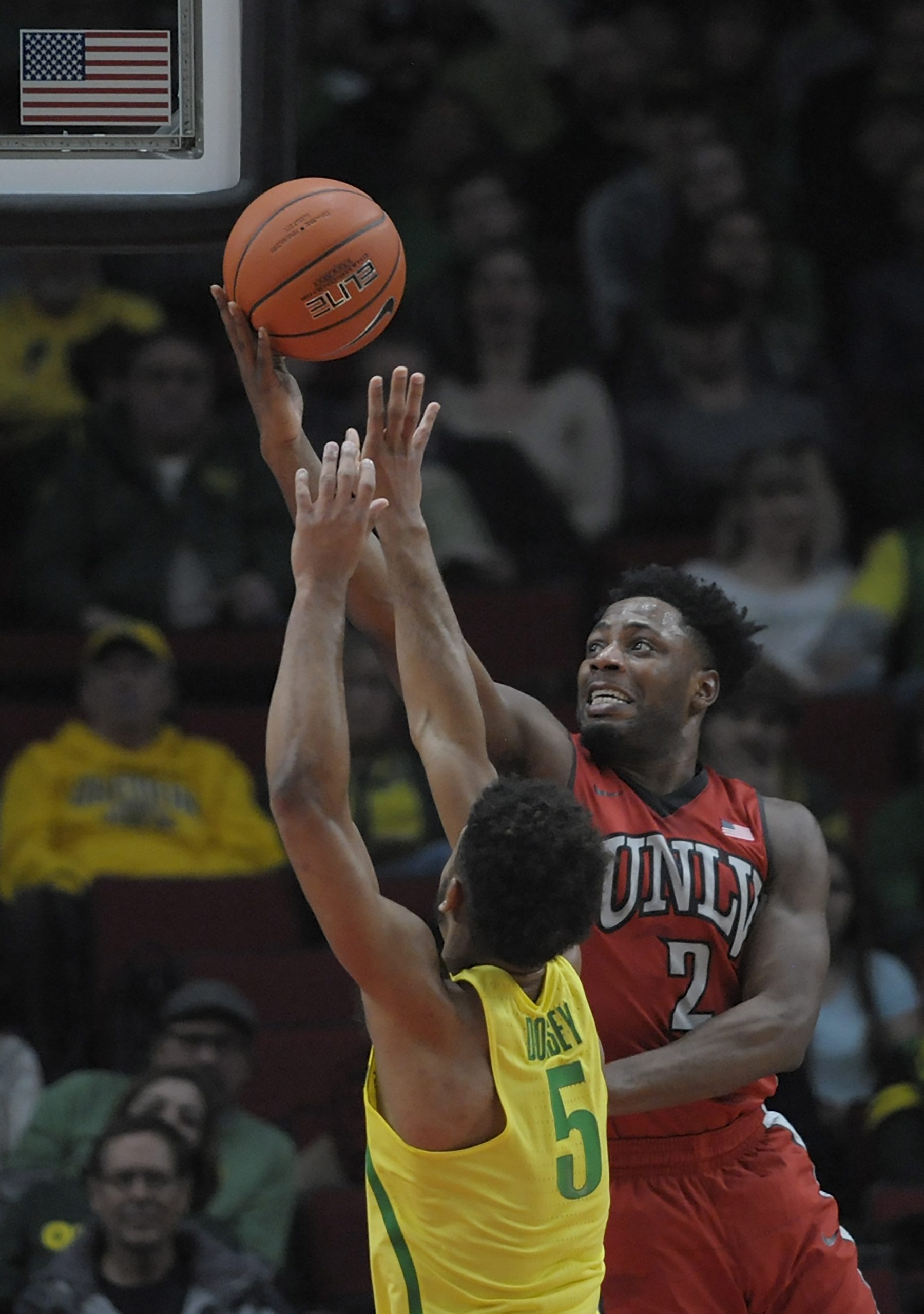 The first bit of new in this game was that star forward, Chris Boucher, was not going to play due to an injured ankle. Fortunately, as he sat on the bench with a boot on, he never stopped rising up and cheering his teammates on, and news was the sitting out was cautionary, the injury minor, and he should be back for Fresno State, and most importantly for the conference opener, at home against UCLA on December 28.

Boucher’s absence forced an alteration of the starting lineup, and it resulted in Dillon Brooks being a part of pre game introductions for the first time this season. Brooks missed the first shot of the game, but found Payton Pritchard open with a pass and it was 3-0, Ducks. Jordan Bell dunked one home to make it 5-0. A pair of free throws next time for Bell and it was 7-0. The Ducks and Rebels traded scores until Dylan Ennis hit on 2 free throws to extend the Ducks lead to 10, 29-19 with 4:35 to go in the first half.  The Rebels took control of those minutes, going on a 14-8 run, to make it a 4 point game at halftime, 37-33.

Take the first five minutes of the second half and give them all to the Ducks in this one; in fact, in the first 9:17 of the second half, the Rebels scored 7 points, on two field goals and 3 free throws. While the Ducks were holding the Rebels to that 7, they put up 21, to lead, 58-40.  A jumper by Brooks a minute and a half later gave the Ducks the lead at, 21, 64-43.   Three 3’s in a row by the Rebels cut the lead to 71-52 with 6:27 left. Tyler Dorsey responded with a 3for the Ducks, and the only mystery left was whether the Ducks would make it 11 straight games holding the opponent to under 70.

The Ducks defense has been very impressive all season and eventually suffocated the Runnin’ Rebels, who could not find an opening anywhere; finishing, 18-55, 32.7 %.  Brooks finished with a team high 20 points in 26 minutes of play. He also had 4 assists, 4 rebounds and 3 steals. Tyler Dorsey put up 18, and Jordan Bell, showing nice moves at the basket finished with a career high, 16 points; along with 12 rebounds and 3 blocks. The Ducks finished shooting, 53.3%, 32-60; 17 assists on 32 made baskets isn’t as much as we’d see with better ball and player movement; the 14 turnovers also reflect on too much standing around with the ball.

The Ducks still haven’t played a complete game; a 20 point win here and the accompanying stats are fine. But there were still lulls that prevented them from being up by 20+ at half instead of the four. It’s better, I suppose to have a stronger second half rather than the reversed but time is running short on the Ducks being able to count on putting the other team away with a second half surge.