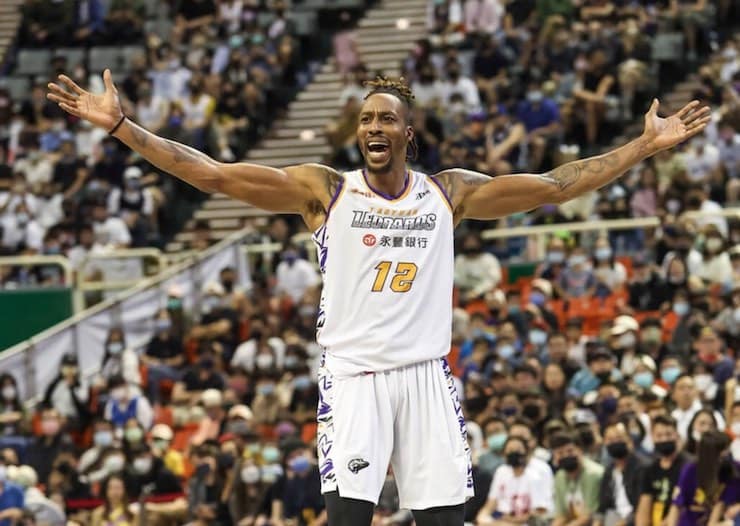 Former NBA All-Star Dwight Howard fired back at Shaquille O’Neal for his comments on Howard playing basketball in Taiwan.

After winning the 2021 NBA Championship with the Los Angeles Lakers, Howard had a hard time staying on a roster. Instead, he continued his career playing in Taiwan where he scored 38 points, snagged 25 rebounds, dished out nine assists, and swatted nine blocked shots in a 120-115 win over New Taipei CTBC DEA.

Howard is currently an active member of the Taoyuan Leopards of Taiwan’s T1 League.

On an episode of The Big Podcast with Shaq, O’Neal called out Howard for playing in what amounts to nothing more than a rec league.

“He’s supposed to have 30 points playing against dudes [who are] 5’8”,” O’Neal said. “This league reminds me of the Life Time Fitness league every Saturday when I go work out.”

However, Howard didn’t appreciate receiving criticism from the former Lakers’ star, who currently appears on TNT’s Inside the NBA.

After ranting about jealousy, Howard turned his attention to O’Neal directly.

“This message is for Shaquille O’Neal… I saw a video of you talking about me playing basketball in Taiwan and I’m playing at the Life Time Fitness League,” Howard said. “Do not disrespect my teammates in this league and these people in Taiwan like that.”

Howard also urged O’Neal to be a better role model to the fans that admire him.

“Come on man, we know what you did in basketball, we know how much money you got,” Howard continued. “You talk about it. We know how much stories you got. We know everything that you have done, Shaquille O’Neal. Stop hating. There’s no need to hate. You done did everything in life that everybody wish that they could do. They want to be Superman. They want to be you!”

Will Howard Be Back In The NBA Before The Season Is Over?

Howard’s arrival in Taiwan has attracted plenty of attention but it appears the former NBA Champion still has plenty left in the tank.

Not only did Howard look good in his T1 debut, he also attempted 10 3-pointers, a sign that he’s using the opportunity to expand his offensive arsenal.

While Howard wasn’t efficient from long range, he could earn a spot on an NBA team if he can prove that he can knock down 3-pointers with any level of consistency.

Howard spent last season with the L.A. Lakers and finished his illustrious career with averages of 15.7 points, 11.8 rebounds, and 1.8 blocks per game.