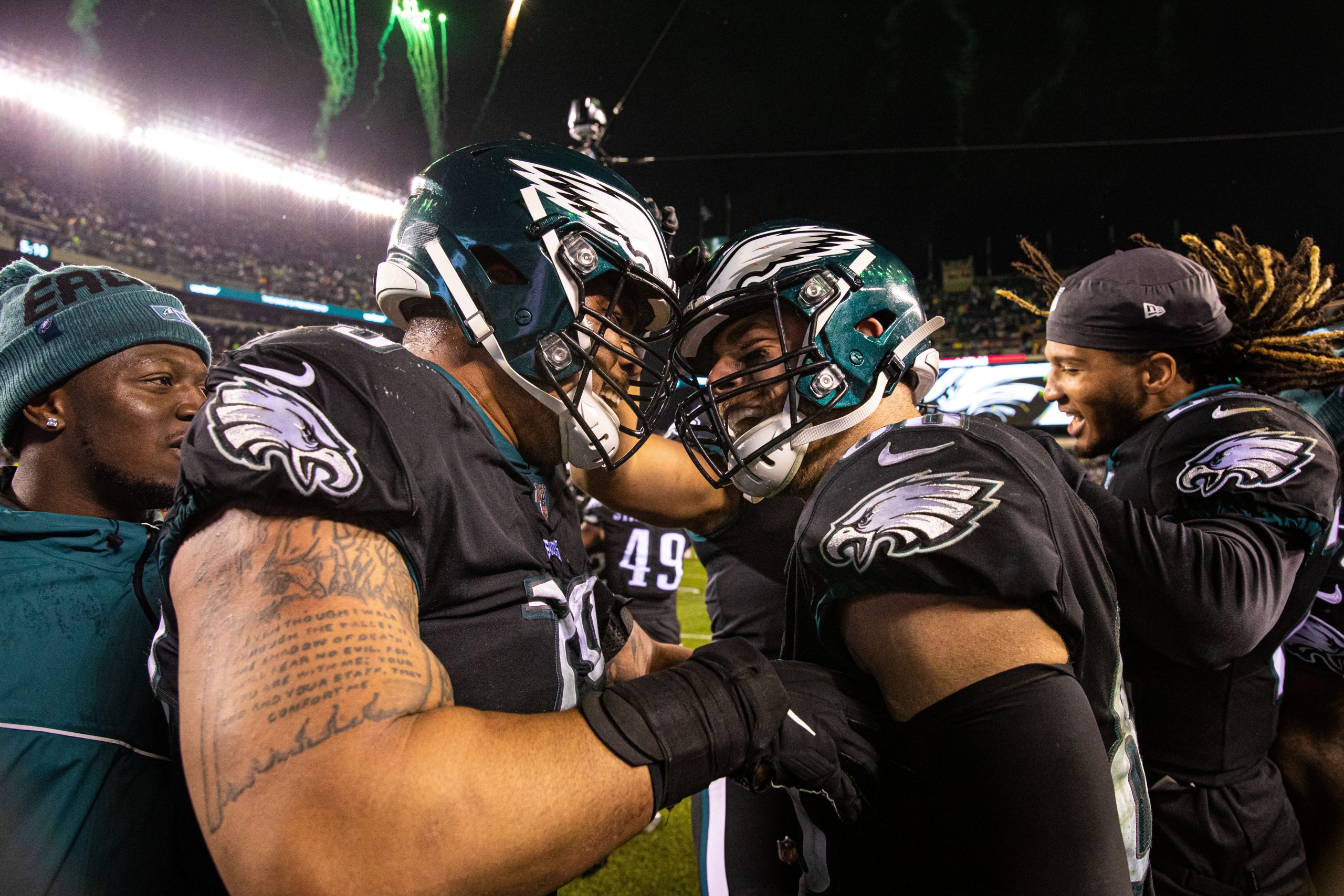 This is one of the main reasons EYE didn’t want the NFL to go to 17 games—  the final regular season affair can so easily turn into a meaningless contest, and with the extra game on the schedule, even more so…  especially when both teams have already clinched playoff spots.

For good reason, both teams will be resting their starting players and other key pieces, some for the whole game, some for major portions of the game.

Ben Rolfe (PFN) writes: “This could be a weird game with both teams only having seeding to fight for. We could see both sides resting starters in the second half with a view to their crucial playoff games the following week. The Cowboys have had Jalen Hurts’ number in their last two meetings, and Dallas needs to get their offense rolling more so than the Eagles do this week.”

The Eagles are dealing with their biggest COVID-19 breakout of the season, placing 12 players on the reserve list on Monday. The list includes big names such as Fletcher Cox, Jason Kelce, Dallas Goedert, Rodney McLeod, Jordan Howard and Boston Scott. New NFL protocols state that players can return to the team after just five days but must be symptom-free. So it’s possible those players can play against the Cowboys. However, with the Eagles already clinched a playoff spot and even a win doesn’t guarantee them to improve their seeding, head coach Nick Sirianni said the coaching staff is still discussing whether to rest players against the Cowboys in Week 18.

Both the Cowboys and Eagles are much different teams now than they were back in their Week 3 meeting on Monday Night Football. In that game, Dallas extended their home winning streak to four-straight over Philadelphia, 41-21. In the win, Dak Prescott tossed three touchdown passes and had just five incompletions while Ezekiel Elliott had 116 yards from scrimmage. Hurts and the Philadelphia offense had over 360 yards of offense but only 64 of those came on the ground in their worst rushing performance of the season.

In their final regular season home game at AT&T Stadium, Dallas failed to start fast and saw their comeback efforts come up short in a 25-22 loss to Arizona. The Cardinals jumped out to a 22-7 lead before closing the gap to a single possession late in the fourth quarter. Dallas looked to have a shot at one final drive to tie or take the lead with a near fumble by Arizona running back Chase Edmonds, but he was called down by the officials. Without a timeout to challenge the ruling, Arizona was able to secure the first down and run out the clock on a three-point victory.

Just one week after the Cowboys offense had seemingly found their groove in a 56-point outburst over Washington, they took a step backwards. Dallas was held to a season-low 45 rushing yards as Ezekiel Elliott only managed 16 yards on nine carries. Additionally, Dak Prescott was visibly affected by multiple Arizona blitzes and finished with 226 passing yards, a fumble, and three touchdown passes. Sunday marked the first time all season that the expected 2021 starting offensive line had played together, yet Arizona still finished with six QB hits and eight pressures.

To add insult to the loss, Dallas will be without wide receiver Michael Gallup for the rest of the season with a torn ACL he suffered upon leaping for a touchdown grab in the second quarter. Jerry Jones confirmed the news to the media after the game after the star receiver never returned to action. Gallup missed seven games earlier in the season due to a strained calf he injured in the season opener against Tampa Bay and will be unavailable for the Cowboys playoff push.

Much like the Eagles, the Cowboys are in a situation where extra rest for key players could pay off more than the risk of injury while pushing for a higher seed. Dallas has been nursing injuries on the offensive line and in the backfield with Dak Prescott, Ezekiel Elliott and Tony Pollard for much of the season and each could use an extra week of rest. However, the other side of the coin for Mike McCarthy’s decision has the small possibility of a higher seed with a win, and the opportunity to gain momentum into the Wild Card Round.

Now Dallas has their own share of COVID worries, too. It was announced just prior to Wednesday’s practice that Micah Parsons has been added to the COVID protocol, making him unavailable for the time being. At the same time, Keanu Neal was activated off the reserve/COVID-19 list after missing last week.

For the Eagles, this is the Rest In Pieces reality:

There is a strong case to be made for the Eagles resting their starters against the Cowboys — a game that has been flexed to Saturday night, the league announced.

For one, given all the variables in play, a win over Dallas does not ensure the Eagles will get their desired seed/opponent.

Second, with a chance of playing the Cowboys in the opening round of the playoffs, there’s incentive enough for the Eagles to hold some cards close to their vest.

Third and most importantly, it allows quarterback Jalen Hurts and other key players to heal up. Sirianni was candid following Sunday’s win over Washington, saying, “We all know [Hurts] is dealing with an ankle injury and fighting through it.” He brought it up to illustrate Hurts’ toughness, noting that Hurts approached him at the critical point in the game to tell Sirianni to call whatever he had to call to win, including a QB run.  A pseudo bye-week will help him, along with the rest of his banged-up teammates, while ensuring no other key injuries are sustained. That’s really the only certainty in the whole equation.

But then there is the haunting voice of the late John Madden:

“I believe so firmly in this: that there is only one way to play the game, and it is a regular-season game and you go out to win the darn game.”

This is why I hate divisional games across the entire league in the final week of the season. Dallas week should be about a longtime rivalry and once again it’s about just curling up in a ball and giving them the game like in 2017. If the league desperately needs that 17th game, then play those interconference games that were added as a result on the final weekend. Having all division games in Week 18 just destroys the integrity of these traditional divisional rivalries.

Anyway, we deal with what we are dealt, I guess, so I will approach this game as at least very meaningful for the practice squad call-ups and second-teamers on both sides who will try to make some kind of mark for themselves.

Head coach Nick Sirianni already acknowledged that Miles Sanders is unlikely to return for Saturday’s regular-season finale against the Cowboys. Meanwhile, fellow Eagles backs Jordan Howard and Boston Scott were placed on the reserve/COVID-19 list Monday, potentially leaving Kenneth Gainwell in a key role Week 18, though Howard and Scott still have time to clear the NFL’s COVID-19 return-to-play protocol. Sanders, on the other hand, likely is targeting the playoffs for his return from a broken hand.

One last thought on the subject— the game reps which could end up being the most meaningful are those in-game management decisions by the Eagles’ coaching staff.  We have seen in several previous games some questionable coaching decisions, like Sirianni’s timeout call with 31 seconds to go in the first half of the last Washington game.  That kind of stuff has got to be cleaned up because it can be fatal in a playoff game.