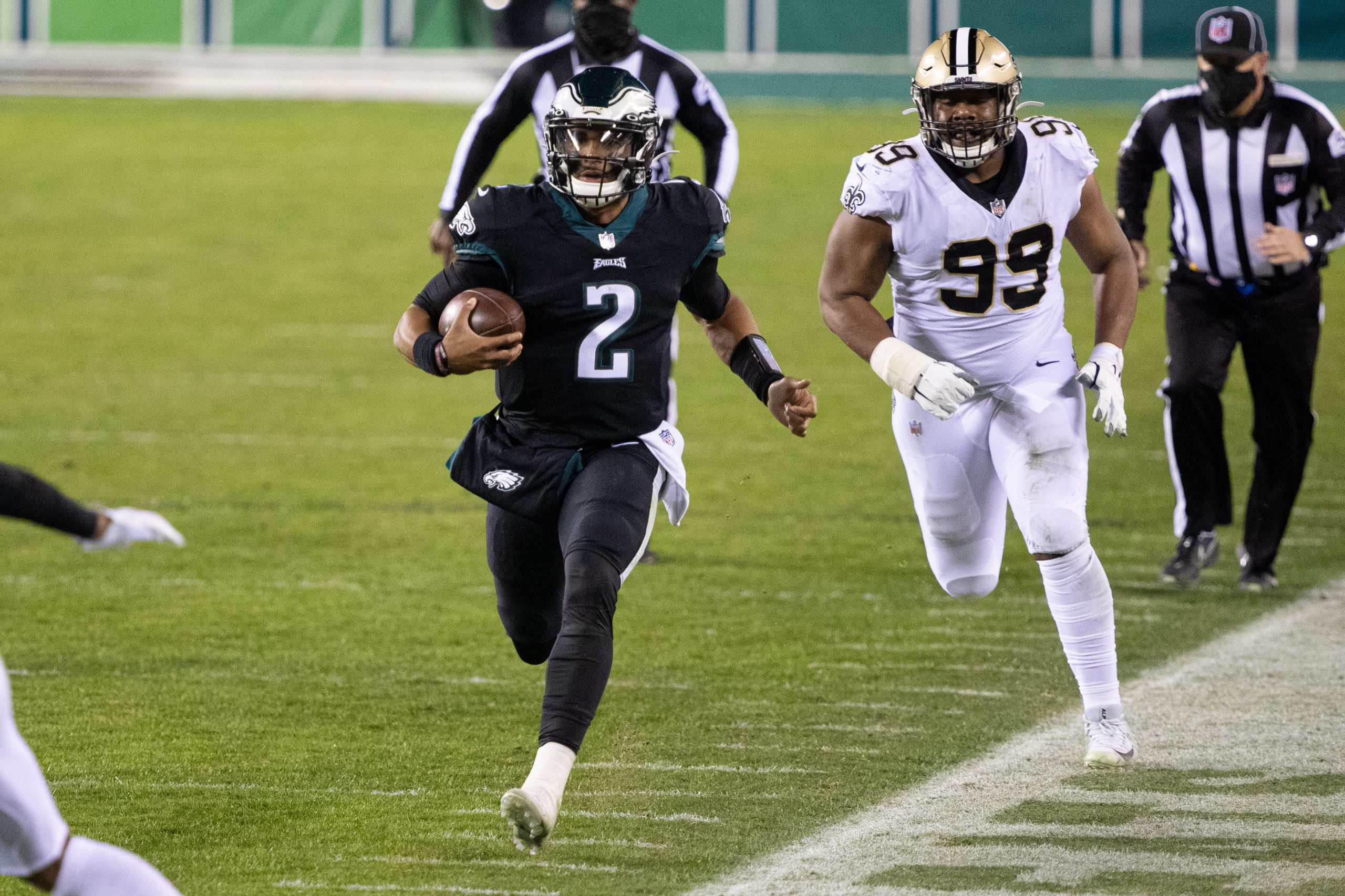 It was only about a month ago when media rumors were snowballing that rookie head coach Nick Sirianni was overmatched, overwhelmed and on the verge of losing his locker room.  But a curious thing happened— instead of ridiculing their head coach for his early playcalling struggles and pollyanna flower power coach-speak, the players kept buying into his intense focus on the fundamentals in practice.  Apparently they have grown through the turbulence to believe in their coaching.  They’re starting to play for this guy.

The Philadelphia Eagles stuck to their revised run-first approach and dominated the NFL’s top-ranked rushing defense.  Jalen Hurts ran for three touchdowns, Darius Slay returned an interception for a score and the Eagles beat the New Orleans Saints 40-29 on Sunday.

Sirianni is getting major dividends from his decision to free Hurts from the role of featured passer in a pass-heavy approach.  Hurts is a point guard who scores now.  It makes too much sense.

“Jalen is a special player who forces defenses to play different,” Sirianni said. “You look at their defensive stats but you also want to do what you do well.”

Miles Sanders ran for 94 yards, Hurts had 69, Jordan Howard added 63 and the Eagles racked up 242 yards on the ground against a team that previously allowed 72.9 yards rushing per game. The Eagles have surpassed 175 yards rushing in four straight games, including 200-plus in three victories in that span.

“It’s a big impact,” Sanders said of having a dual-threat QB like Hurts. “It opens up big holes for all of us. Having Jalen makes it ten times easier but you have to give credit to the offensive line.”

The Eagles (5-6) have won two in a row for the first time this season and Sirianni earned his first victory at home in five tries.

The Saints (5-5) dropped their third straight since losing quarterback Jameis Winston to a season-ending ACL injury during a 36-27 win over Super Bowl champion Tampa Bay.

“Obviosuly, we didn’t do the things necessary to win in every phase,” Saints coach Sean Payton said. “Turnovers were significant. We struggled to defend their run game. And our return game was just average. All of us have to do a better job.”

The Eagles led 20-7 with under a minute left in the second quarter when Slay stepped in front of Siemian’s pass intended for Deonte Harris and returned it 51 yards for his third TD in four games. He had a 32-yard fumble recovery for a score against the Lions on Oct. 31 and returned a fumble 82 yards for a TD last week at Denver.

After the Saints scored 15 straight points in the fourth quarter to pull within 33-22, Hurts put the game away with a dazzling 24-yard TD run, juking defensive end Carl Granderson in the backfield before stepping up and sprinting down the left side.

“I just made a play,” Hurts said. “I’m frustrated from the drives we didn’t score.”

The Eagles took advantage of a turnover to take a 7-0 lead in the first quarter. After linebacker T.J. Edwards made a leaping interception on Siemian’s pass to give Philadelphia the ball at the Saints 39, Hurts connected with Dallas Goedert twice on third-and-6 to extend the drive and then scored on a sneak from the 1.

Hurts ran in from the 3 on the next possession, reaching the ball over the pylon with an underhanded extension to make it 14-0. Hurts has seven rushing TDs.

The Saints climbed back into it when Christian Ringo forced Sanders to fumble and recovered at the Eagles 6. After Siemian’s 8-yard TD pass to Lil’Jordan Humphrey was negated by a holding penalty on Landon Young, he connected with Adam Trautman in the back of the end zone for an 18-yard TD pass on third-and-goal.

Siemian threw a 26-yard TD pass to Marquez Callaway early in the fourth quarter. The Saints failed to convert a 2-point conversion for the ninth straight time.

New Saints kicker Brett Maher rebounded from missing an extra point to hit a 28-yard field goal to cut it to 33-22.

INJURIES—-Saints: Trautman limped off the field in the fourth quarter.