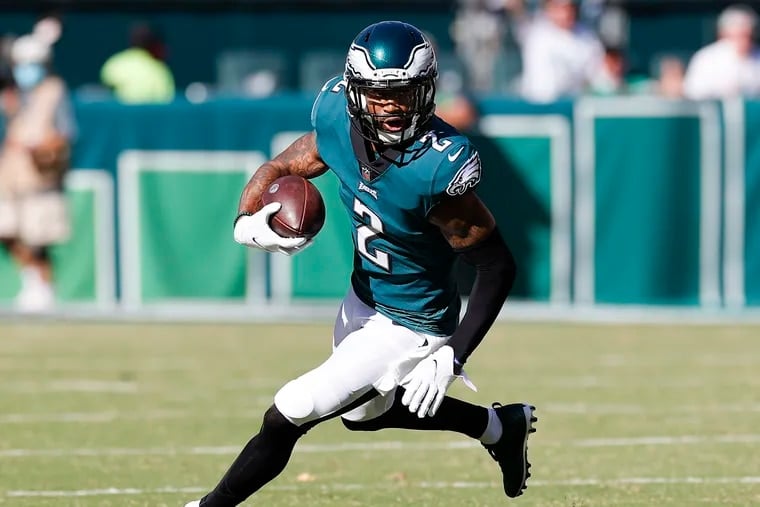 The Eagles (4-0) defended their perfect position perched over the rest of the NFL. However, not all is flawless.

Lockdown cornerback Darius Slay exited Sunday’s win against the Jacksonville Jaguars (2-2) early in the first quarter with a forearm injury. He was spotted with a brace over his right forearm after the game.

The respected defensive back has produced at a Pro Bowl level, despite a plethora of minor injuries. Slay visited the medical tent during last Sunday’s win against the Washington Commanders (1-3). He ultimately missed a series due to back injuries. Shifty receiver Terry McLaurin torched him in the second half, exceeding 100 yards total after being shut out most of the first half.

Slay proved he can win any coverage assignment when healthy in Week 2. He stifled star receiver Justin Jefferson, limiting him to just 1 catch for 5 yards and two interceptions for Slay on 5 five targets when the two waged individual battle.  Pro Football Focuses rewarded Slay’s standout efforts with the 9th-highest cornerback coverage grade rating heading into Week 4.

Exemplary leadership influences the rest of the defense. The Eagles rank among the top 10 in passing yards allowed and points per game.

Slay’s status for next week’s game against the Arizona Cardinals appears to be uncertain.

— LT Jordan Mailata was in obvious discomfort postgame. He’s getting scans on his shoulder tomorrow.

— CB Darius Slay (forearm) told me he’s “good”, though it should be noted that is often a player’s response, regardless of status.

If the Eagles rule Slay unable to play, the team will have to rely more on a prolific offense that has produced the most points in the NFL this season.

The Eagles will exercise caution with Slay. Similarly, bettors should treat NFL betting on the Cardinals with careful consideration.