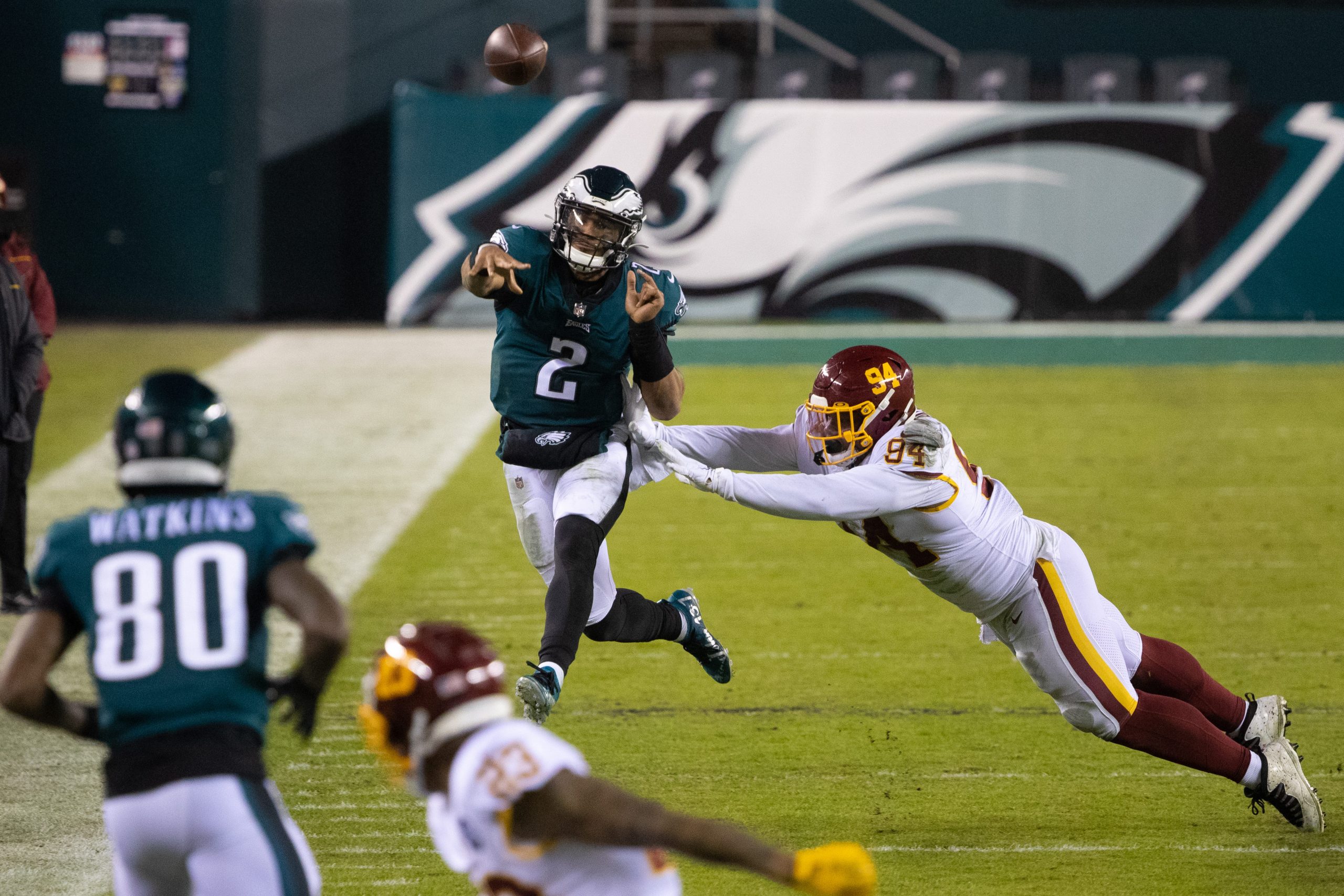 EYE will keep this post short, as it seems our USAToday Sports Daily network has begun implementing a new format which is more confusing to me than the Build Back Better bill. So this is a test in its own right…

Two games scheduled for Sunday — Washington at Philadelphia Eagles and Seattle Seahawks at Los Angeles Rams — have been moved to Tuesday at 7 p.m. ET.

Tuesday’s game against Washington is pivotal, as both teams enter with a 6-7 record and are competing for the final NFC wild-card spot.

Many Eagles fans (and players) are reasonably upset that, because of the covid woes in the WAS organization, the Eagles have to play their next scheduled game on 4 days rest.

The now outdated presumption was the NFL would draw a harder line on pushing games through as scheduled, especially in lieu of league guidelines over the summer that outbreaks due to unvaccinated players could result in forfeited games. All of that has gone out the window.

“So we have to suffer, and compromise our schedule because of another team’s mistake. Make it make sense! Smh”

Seattle coach Pete Carroll agreed, noting how playing on Tuesday will force the Seahawks to then play only five days later, calling that a “big concern” and a “big burden” for players to have to recover on a short week.

“It’s not what their bodies want to do. They’re trained to have a whole week to recover, and they don’t get it,” Carroll said. “So in that regard, if our game could move back to Monday, that would help us some. That would kind of get in the middle of next week as well. I don’t know what’s going to happen, but not a fan of that for the players’ sake.”

To be fair, Washington coach Ron Rivera is willing to take “every able body” he can find at this point.

COVID-19 has left the roster in shambles with multiple players potentially being out of the lineup on Tuesday. Defensive tackle Jonathan Allen, backup quarterback Kyle Allen, defensive end Montez Sweat and cornerback Kendall Fuller are some of the standout names on the list. And now, you can add Taylor Heinicke to that list as well.

Philly’s defense is no pushover, and Washington’s top receiving targets, wideout Terry McLaurin and running back J.D. McKissic, are questionable to play. It could be a pulling a rabbit out of the hat sort of situation for whomever the Football Team starts at QB in this matchup—Garry Gilbert, Kyle Shurmur or Jordan Ta’amu.

But there’s some uncertainty for the Eagles as well with quarterback Jalen Hurts still banged up but listed as probable. So, Washington’s defense could be shorthanded and caught off guard with whomever the Eagles choose to start. Hurts and backup quarterback Gardner Minshew are completely different players.

Add to the uncertainty the fact that rookie G Landon Dickerson was just added to the Eagles’ own Covid restriction list.

If Washington can’t consistently rush the quarterback, their defensive backfield could get torn to shreds. That unit is allowing the third-most passing yards per game.

Opposing quarterbacks are averaging 259.1 passing yards per game against Washington this season. So the Eagles should be flying high through the air regardless of who starts at quarterback.

Oh, and don’t forget that both Terry McLaurin and J.D. McKissic are questionable to play in this game. So now the WAS backup quarterback could be without two of the team’s top-two receiving targets. Philly hasn’t been great against the run at home, but they’ll be able to tighten things up without any fear of the passing attack.

Of course there is the Curse of Joe Webb in play now. Remember the Tuesday night game in Philly in 2010 when Webb came out of nowhere for the Vikings to lead them to a major upset win?

The odds favor the Eagles by 7… but Joe Webb would probably bet on the underdog in this one. It could get ugly.