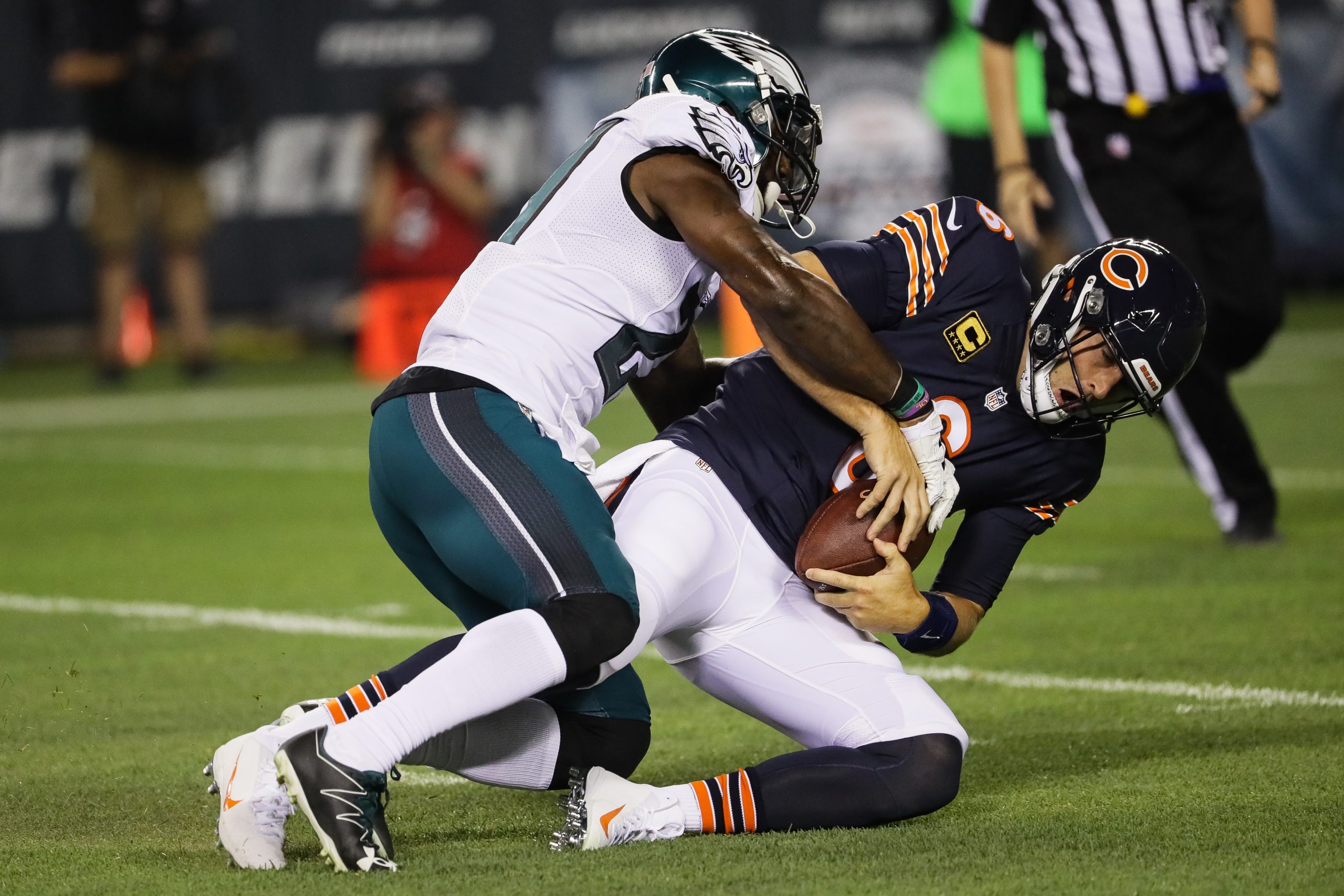 Nobody underestimated the Bears as a physical opponent…but the Eagles seemed out of sync with the cold windy weather. Hands and timing seemed frozen.  The Birds’ offense was expected to mount a run game, so the Bears’ defense stacked the box and dared Jalen Hurts to take to the air against mostly one-on-one coverage.  Hurts took the bait.

It took a while for Hurts to adjust. Completions were difficult. Quez Watkins screwed up a route and the result was a costly INT. Jaylon Johnson was covering A.J. Brown like a form-fitting suit.  Miles Sanders fumbled a reception.  Not much was working. The loops and stunts of the Philly defensive line kept constant pressure on Justin Fields and held the game in check until the Eagles’ offense finally found some continuity.

Jalen Hurts had trouble feeling his hands. With bone-chilling wind whipping through Soldier Field, he even found it difficult to see. Some big hits only added to his pain.  None of that prevented him from leading the Eagles to their franchise record-tying 13th win of the season.

Hurts tied a career high by running for three touchdowns and Philadelphia outlasted the struggling Chicago Bears 25-20 on Sunday.

The Eagles came in with the best record in the NFL and walked away with a tighter-than-anticipated win. At 13-1, they matched the best start in franchise history, achieved previously by the 2004 team that reached the Super Bowl.

“The great teams, the great players, they find a way,” Hurts said. “And I think collectively as a group, we all came together and found a way as a team. And I think that’s the biggest takeaway from this game.”

Chicago’s Justin Fields ran for 95 yards to reach exactly 1,000 on the season, joining Michael Vick and Lamar Jackson as the only quarterbacks to rush for 1,000 or more. He also set a franchise single-season rushing record for a QB. But the Bears (3-11) lost their seventh straight game — their worst skid since dropping eight in a row in 2002 to match a franchise record.

Hurts is also closing in on history as a ball-carrier. He has 13 rushing touchdowns, one short of the NFL record for a QB, set by Cam Newton during his rookie year in 2011.  Hurts finished with 61 yards rushing and has 747 this season. He completed 22 of 37 passes for 315 yards, shaking off two first-half interceptions while playing in temperatures recorded at 18 degrees Fahrenheit at game time.

“He can’t control a bad play earlier; he moves on to the next play,” coach Nick Sirianni said. “It’s no surprise. That’s who this guy is. And we’ve seen that over and over again.”

The Eagles’ do-it-all QB ran for a 22-yard touchdown in the closing minute of the second quarter and 1-yard TD early in the third that made it 17-6. Hurts added another 1-yard score and ran in the 2-point conversion with 4:20 left in the game to put Philadelphia ahead 23-13. But the Bears weren’t finished.

Fields — who hobbled to the sideline because of leg cramps on the previous possession and briefly exited the game — hit a wide-open Byron Pringle for a 35-yard touchdown that pulled Chicago within five with 2:43 remaining. (Blown coverage by Darius Slay…)

But the Bears didn’t get the ball back. After the two-minute warning, Hurts connected with A.J. Brown for 12 yards on third-and-6, allowing Philly to run out the clock.

Brown caught nine passes for a career-high 181 yards, including a 68-yarder that set up the final touchdown. DeVonta Smith had five receptions for 126 yards.

Haason Reddick, Josh Sweat and Javon Hargrave each had two of Philadelphia’s six sacks, helping the Eagles squeeze by after winning their previous two games by a combined 51 points. 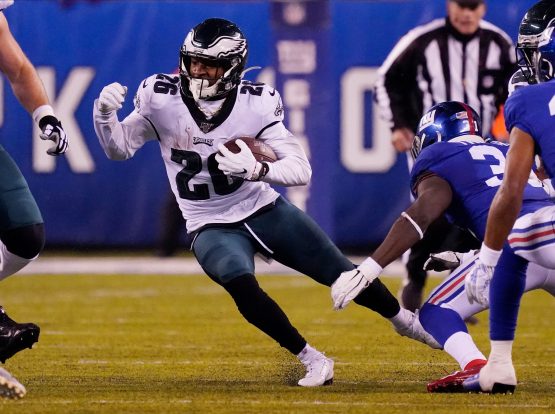